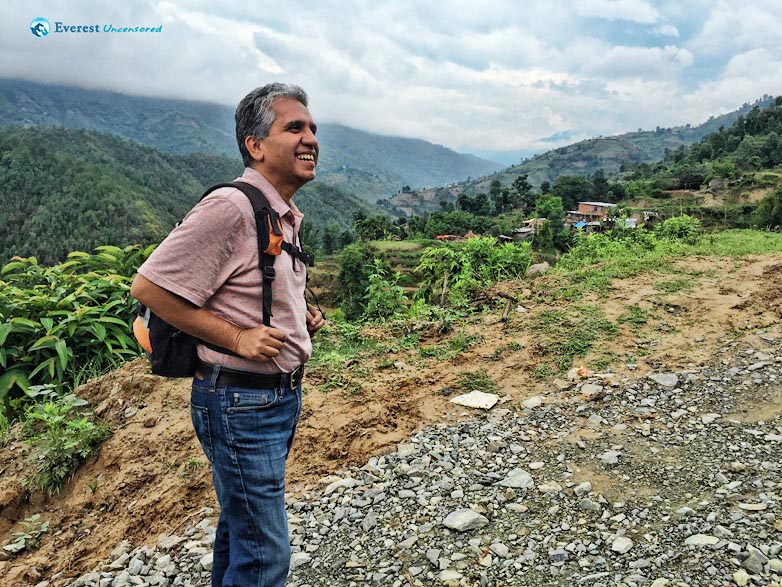 Pranab Man Singh
I have a habit of lecturing, but not writing. So, I will try my best to write about this hiking experience.

When Pramod called me on Thursday and said we will be visiting Dhading to do a assessment of a building, I said ok. Then, when he called me on Saturday to reconfirm and told me we will also be hiking, I was thinking “Shall I say I am suddenly busy on Sunday?” It had been almost fifteen years since I hiked, but I finally said ok!

I woke up at 5:00 AM and packed my bag. I realized that I only have leather shoes. So, I borrowed my son’s sports shoes and shorts. I was picked up at Namaste Supermarket at Pulchwok. Kedar was driving for us. Pramod and Lekhnath were already picked up before me. We went to Annapurna Hotel at Darbarmarg to pick up Rudra Dai. Our ride to Naubise took us about two hours. We had breakfast there and rode again. From Mahadev Besi, we went uphill to Thakre where I inspected the premises of Bhikkhu Sadhana Sthal for post earthquake damages. From scale 1 to 5 (one being the minimal and five being unusable), the structures have cracks of scale 2 to 3 which can be repaired using wire-mess and plastering. Deerwalk will be providing some financial support for repair work.

After inspection, we started our Hiking from Thakre. We passed by a government school whose building was also damaged. Along the way, many people were living in shelters made from Galvanized Iron (GI) sheets since their houses were damaged by the earthquake. These shelters should be used as a temporary option only. If used for long term, it will create negative impact on the health of the occupants.

We passed by a few villages along the route. Rudra Dai asked a villager “How many kids do you have?” And, we got a very surprising answer “Four daughters from first wife and one six-year old from the second wife.” Then, Rudra Dai asked “How old are you?” He replied “I am 76 years old.” Giving preference to son is still prevalent in our culture. This culture has to change. Only education can change this concept in the near future. I believe sons and daughters should be treated equally.

Then we hiked along a narrow village path. One observation I made was that there is Dish Home in almost all shelters or at least have a connection from their neighbors. One Dish Home can support up to three TVs. There is no electricity, but people have TVs run by Solar Power. There is a free natural water supply everywhere here, but where we live in Pulchwok we have water delivery only at some cost.

Then we hiked further asking the villagers the way to the Saat Ghumti which means Seven Turns. There are seven turns in the hilly road.

Saat Ghumti which means Seven Turns. There are seven turns in the hilly road.

Asking for directions is also a way of communicating with the people in the locality and acknowledging their presence. After walking for another two hours, we reach the first turn or Ghumti. Kedar was waiting for us there. We then rode to Palung for lunch.

Along the way, we could breathe fresh air and see clouds touching the hills. The sight was breathtaking – the splendor of nature in its purest form. Then we rode back to Kathmandu. After dropping off everyone, Kedar Dai dropped me off at Namaste Supermarket. I then hiked to my home situated at the top of the hill at Pulchwok.

I would like to thank Deerwalk. for this wonderful experience. This was my first Hike with Deerwalk and now that I have gained back my confidence, I will be joining more hikes in the near future.