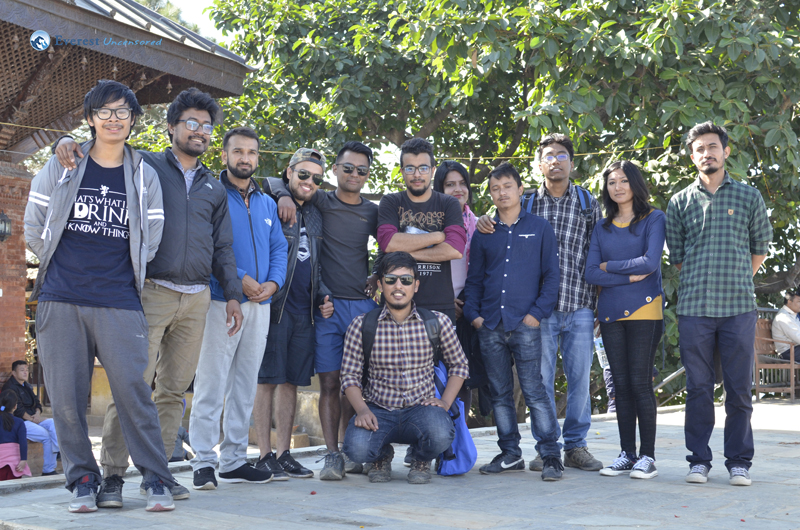 It was my third hike from Deerwalk. We all planned to reach Santaneshwor, a religious temple of lord Shiva.

Micro picked me up from Koteshwor at around 7:30 am and reached Nagadaha where we had our breakfast and started our hike. It was cold morning and the village was covered with fog. Walking through the woods and feeling the breath of fresh air joking and singing all the way. Everybody was excited and hiking became more adventurous. We walked for about 2 hours and reached Santaneshwor, a temple where childless parents go to pray for children. We stayed there for around half an hour, took some pictures and resumed our hike. After one and a half hour we reached an even more beautiful and peaceful place “a huge golden statue of Buddha”.

The meditating posture of Buddha gave us a feeling of happiness and peacefulness.

The meditating posture of Buddha gave us a feeling of happiness and peacefulness. We rested for 30 minutes and headed towards Godawari.

After a walk for 45 minutes from the Shantiban, we reached the Godawari where we had our snacks. We played minimillitia and joked there a lot and we headed back to home from there around 5:00 pm.

‘Offline with the hectic world is peace of mind’. This was my second hiking from Deerwalk and I was excited as usual. We left for Santaneshwor at around 8:15 am. We picked up all our colleagues in the way and reached ‘Nagadaha’. We had our breakfast there and our hike officially began from there.

I had already started to feel the breath of fresh air having moved away from the city covered with smog. After walking for about 1.5 hours, we reached ‘Santaneshwor temple’.

It is believed that the people who do not have children, once they please Lord Shiva visiting Santaneshwor Mahadev Temple, then their lap would not get barren.

It is believed that the people who do not have children, once they please Lord Shiva visiting Santaneshwor Mahadev Temple, then their lap would not get barren. We rested for an hour. After that, we started to go down the hill to reach the ‘Shantiban’. The hiking was quite adventurous as well as fun as we walked along with tall trees, shadows, jokes and singing. The hiking track was sometimes going up and up and sometimes going down and down. After around 1 hours of hike, we reached to Shantiban. Shantiban is easily visible from across the road with the huge golden statue of Buddha in meditation posture. Perched on a hill, the 25 feet tall Buddha’s image is the main attraction of the place. The place has a different charm altogether, the blissful ambiance, peaceful nature and the sweeping view of Godawari settlements below where we rested for 45 minutes. Besides walking, we also took some snaps and enjoyed the pleasant weather.

Ultimately, everyone’s energy was fully used up, we headed towards Godawari. After a short walk for about 30 minutes from Shantiban, we reached the Godawari.

We briefly stopped there for our Snack, after delicious Snack, we headed back to home.