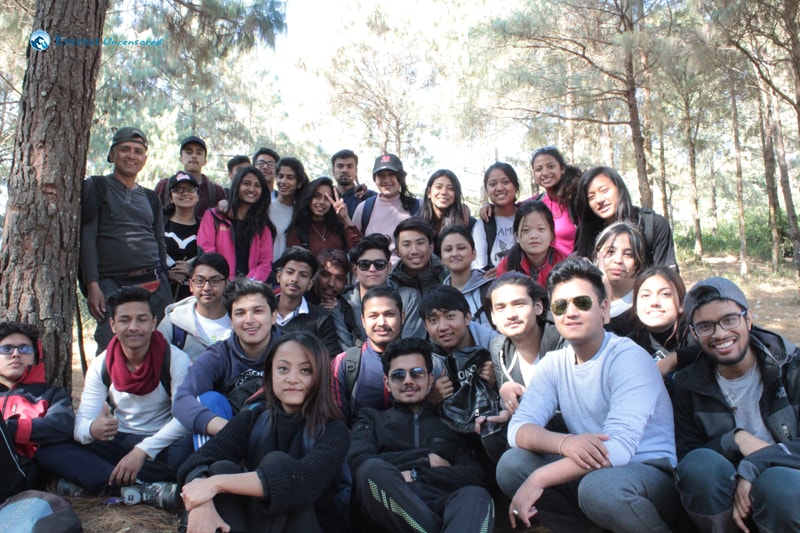 When I first got a notice about the mandatory whole batch hike to Nagarkot, to be honest, I was quite reluctant about the idea. Also, it was also mentioned that the hike would be of five hours. But the thought of going there along with my friends brightened up my mood. Since it had only been about a month we started college, this hike would be the perfect opportunity to strengthen our bonds and make more friends.

As per the instruction, all of the hikers arrived at the college premises by 7:30 am. Since we were a large group of 53 along with some senior brothers and Surendra sir. We had to be divided into four groups for management. After some time spent managing our large group we moved from the college in college bus. After about an hour we got off at Sankhu and began our hike after a small meeting with all the hikers coordinated by Surendra sir.

The hiking began with enthusiasm and excitement that lasted the entire hike. We began walking in groups guided by senior brothers and Surendra sir.

The hiking began with enthusiasm and excitement that lasted the entire hike. We began walking in groups guided by senior brothers and Surendra sir. After some hours of tiring walk through some steep and slippery paths, all of us gathered around a chautara type place and rested and had some snack which was technically our lunch. There we sat around for some time and rested ourselves. After some time, we picked up our hike where we had left off with new enthusiasm and spirit. After walking through some very slippery paths in the forest we finally arrived at our destination – Nuwakot.

Then again we walked to the tower along with our friends talking and laughing all the way. After that, we got on the bus and began our travel back home. Though on the way back home we sang and danced all the way which is was also quite as fun as the hike itself. Almost all of us were on the same bus and many of us were dancing in the songs playing on the bus. After arriving at the college we had dinner together and then went back home.

Nagarkot hiking was fun and adventurous. We spent our time amongst the natural surroundings of Nagarkot. We started our journey from DWIT premises at 8:00 a.m. and reached Sankhu at 9:30 a.m. Then from there, we began our hiking. The hike was especially emphasized for the batch of 2020, so all of the students from the 2020 batch were present.

The main motive of the hike was to make a comfortable environment among the students of the 2020 batch, and to get us mingled with the other side of DWIT.

The main motive of the hike was to make a comfortable environment among the students of the 2020 batch, and to get us mingled with the other side of DWIT.

The hike adventure started at 10:00 a.m. and we were provided with some light munching. Then with the guidelines of our seniors we began our walking. Though the hike session was tiring, the company of friends made it fun.

After 3 hours of walking we decided to rest for a while. So we halted at a nearby ground and had some snacks. After that we moved and explored through the jungles and small villages, finally reaching Nagarkot at 3:00 p.m.

Then later, our college bus picked us up and we reached college at 7 p.m.

Bisesh – The hike to Nagarkot was one of the best experience I had. It was very adventerous and exciting. It was very fun to Hike with the whole batch. I got to learn more about my friends.

Brikshya – The hike went really well. It was my first time so I did have some difficulty but I was able to complete it so I’m glad I did that.The mesmerizing views was worth it in the end.

Ekta – This was the first time I went with such a large group of people maybe due to which the experience was different int a positive kind of way.

Mandip – Hiking is most adventurous and thrilling event to me always. Its always the best way of exploring new things around . My recent hiking was just amazing.

6 thoughts on “Hiking from Sankhu to Nagarkot”