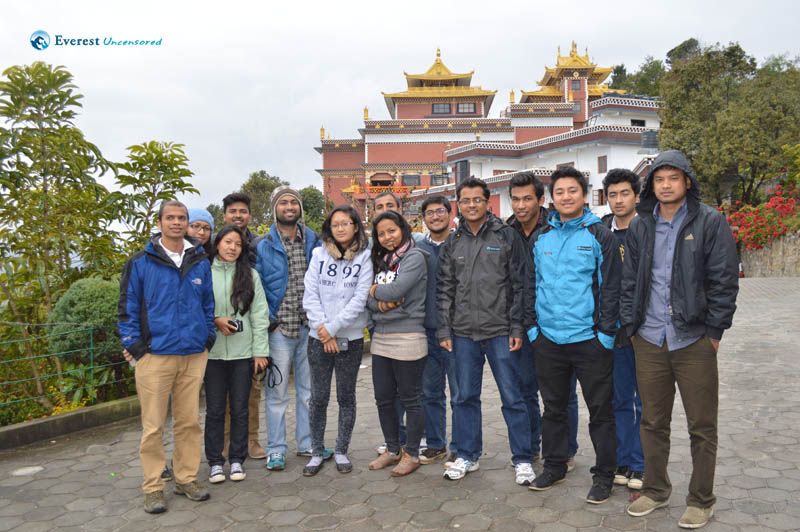 It was my first one day hike from Deerwalk. I was eagerly waiting for this day. I was physically and mentally prepared for the hike. But all my eagerness was swept away by the heavy rainfall. I was so sad. “Rain, Rain Go away, come back another day”, this rhyme began to play in the background. Suddenly, my clock alarmed, I woke up. Thank god, it was just a dream. Oh no, it was raining outside too. I was upset. Sometimes, a dream comes true.

Will this rain ruin our hike? No way. I started preparing for the hike. At around 8:30 am, I was informed that hikers have left the deerwalk premises. Some hikers were picked up at Koteshwor and I was the last one to get picked up at suryavinayak. It was about 9:30 am. We reached Dhulikhel at about 10:30 and had breakfast. Then we headed directly towards our destination. On the way, we had lots of fun. Some cracked jokes. The most interesting thing was we revised Nepali subject of class 1 to 10. I still remember Kishor citing the biography of King Prithivi Narayan Shah in a bold way. We had fun with a rap battle between Sawan dai and Pramesh bro. On the way, we stopped to see the mesmerizing natural views and Mountains which seemed like floating. At around 1:00, we reached our destination Namo Buddha-one of the sacred and important destinations for Buddhists. It is believed that this is the place where Lord Buddha incarnated as the prince gave up his body (and of course our Pramod dai got enlightened too). We could see a monument commemorating the selfless deed of the prince manifested in three stone statues of the prince, the tigress and her cubs. We lit an oil lamp (diyoo) to show our respect and moved on to enter the resplendent Gumbas. Their gumbas were ornately crafted masterpieces of high Buddhist art designed to evoke serene tranquility in the onlooker. They were successful in instilling a sense of peace and calm onto our souls.

After prince offered his body in generosity to the tigress, people found it difficult to travel through the region by the fear of all wild animals

One of the interesting fact about the name of the place is “After prince offered his body in generosity to the tigress, people found it difficult to travel through the region by the fear of all wild animals, so they developed the practice of reciting “Namo Buddhaya” (I take refuge in the Buddha to dispel their anxiety). To this day, the local inhabitants call the area Namo Buddha.

It was such a beautiful place to be. It’s a very quiet and pure. Its environment is very clean, with no pollution, and the natural air is so fresh, cool and healthy. At around 3, we headed to our van and returned to Dhulikhel to have lunch at a hotel named “CHAPPRO”. After lunch, we had some desert and since environment was challenging us, we were bound to have some shots at ghar pachidi ko pasal ma. After that, we headed back to our office. Thanks to driver dai for driving us home safely and thanks to all the team members for making this hike an incredibly memorable one.

Saroj Ghorasaini.
This was my first hiking from deerwalk. The hiking route was from Namobuddha to Panauti. I was so excited to be a member of the hike. As talking about my hobbies or my personal interest, hiking would be my best option. Actually, this hiking program was so important for me not only because of my interest, but hiking provides opportunity to communicate and understand different members not only with the same team but also with other team members. I would like to explain from the initial movement of that day.

First of all it was a rainy morning in the cold of December, the temperatures degrade at the lowest point. I woke up early in the morning and because of the excitement all finished I did the as usual work and ran to the office. I was the first person to reach at the office. I reached at office in exact time 7:30, but I think due to cold rainy weather morning, I didn’t see any member until 8 o’clock. As I was told to come at 7:30 so that we would depart at 8 o’clock, I was so desperate that whether the program was going to be cancelled or not. As members were gathered over 8:00 I was sure that we are definitely going for a hike.

As we travelled from Aaraniko Highway, which is clean and Broadway. Our vehicle was running smoothly on its destination, meanwhile we were enjoying inside the Van by cracking jokes, singing aantakchiri, “Bhajan”. I forgot the name of that Bhajan but I know it was started by Promod day. Actually, every member is so friendly and helpful and I feel so proud to be a member of such honorable team. When we reached Dhulikhel we all decided to have breakfast because it was almost 11:30.

We took some rest at the hotel and Sawant dai took introduction footage of all members and that was also fun. After that we continued our journey to Namobuddha. Few hours later on the way to Namobuddha we stopped the Van to see the beautiful scene, that was a hilarious moment because it was a cold day with beautiful scenery. we took some photos with all members. That sight and the glorious surroundings made the early wake-up time worth it. I then realized that I needed to have more of an adventurous attitude when experiencing something new like this hike. It was like a sign saying good things come to those who persist. After enjoying the gorgeous scenery, we again continued our journey .

At approximately 12:00, we reached at Namobuddha. There we visited the temples and monasteries around it, actually I don’t know the names of the monasteries but all the monasteries’ design and the decoration insides were awesome.

When we reached at the peak of the Namobuddha we saw the hiking route to Panauti. It was long enough. I was so excited to hike, but unfortunately due to the rain all the members of hikers decided not to go to panauti in any manners from that way because that way was so muddy. As we did not went to Panauti we came to the Dhulikhel. it was almost 2:00 pm when we took lunch and decided to return home. Although we could not hike, but spent a memorable time with such great peoples. And especially thanks to Regina didi for organizing such a wonderful event. Thanks!

151 thoughts on “Hiking to Namobuddha Gumba”