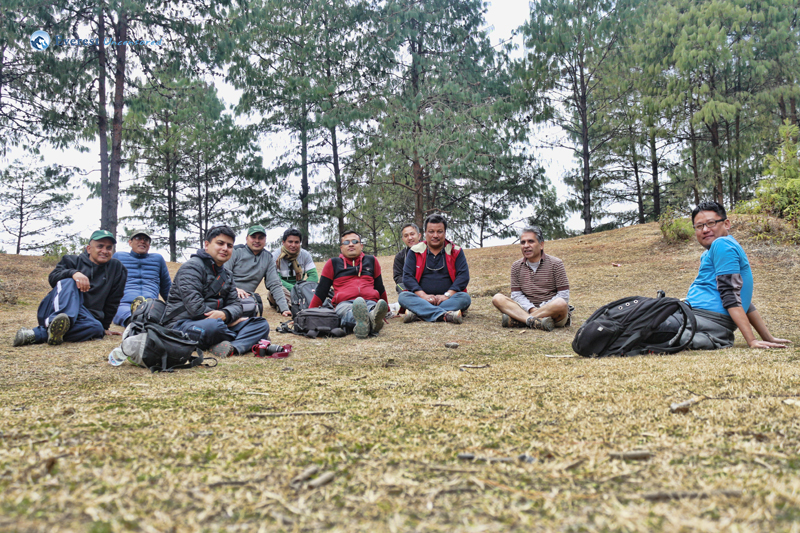 Aseem Bhattarai
Seven twenty-five in the morning. Sharp. That was exactly what I needed after a lazy Saturday afternoon, sort of a wakeup call. Thanks Pramod Dai. I was oblivious to the fact that I needed a break from the continuous monotony of life. When you spend your available time juggling with your priorities and your available space, life just passes you by.

The last time I was out on a trek was well over a decade and at least 15 pounds of upper body weight ago. To be frank, I was a little shaky on my feet as we started to walk. I was worried about my knees, you see. I am generally very kind to them and this was definitely no walk in the park.

Chronologically, I was amongst the least aged people in the group. Mentally, I was not so sure. Some of them may have even been in their fifties, but at heart, they were not a day above twenty five.

Maybe some of us needed it more than I did. At barely half an hour into the hike, I could hear more than one of us thinking (out loud) about how far along we were. Nevertheless, it took most of us, at least a couple of hours of climbing uphill (a wee bit more for the rest of us, I suppose) to get to Lakuri Bhanjyang. Walking on an empty stomach hadn’t been easy. So you can imagine my surprise when out came the deck of cards no sooner than we were seated at the old and worn out eatery right in the middle of the hill pass. The taste of roasted and spiced up soya beans with fried potatoes shall linger for a while to come, I guess, and not just for me, for everyone else as well. Some in the group ought to remember it more, for they were pretty lucky* with the cards there.

The pass itself is placed strategically South East (More to the east than south) of the city of Kathmandu, and is a mere six kilometers off the Ring Road that runs a circle within the valley of Kathmandu. The hiking trail started off as an off road bypass to the motor able road to Panauti (eventually) from Lamatar, Lalitpur.

The major part of the trail was uphill with dense foliage on both sides, and the view of the valley we were leaving behind loomed vaguely over the horizon, despite the dense fog, and it was quite a sight.

The major part of the trail was uphill with dense foliage on both sides, and the view of the valley we were leaving behind loomed vaguely over the horizon, despite the dense fog, and it was quite a sight.

“The weather could definitely have been better, the view of the mountains is terrific on a good day”, Rudra dai happened to remark along the way, I couldn’t agree more. It would have indeed been nicer to get a few panoramic shots of the mountains with my Nikon. For the time being, however, I had to be content with the amazing landscape and the view of housetops, and terraces over the hills as far as my eyes could see.

“Getting drunk helps cross the pass easier”, mentioned the old wench who insisted on accompanying us a part of the way as we crossed over to the other hillside. And drunk she was, indeed, to the point of offering to teach us her native dialect, and a round of drinks at her village. Oh, we were so glad when she went along her own way at the next crossroads. She left me wondering though, about walking drunk, in the least, and whether it helped.

Having a small frame has its advantages, I noted, as we started our descent over the other side of the hill – it helps to be light on your feet. The way down was no piece of cake either, and although we stopped every few hundred meters to enjoy the view, catch our breaths and comfort our knees, the larger part of the downhill hike was very steep and I had to check myself from tumbling over on more than one occasion.

At two hours past midday, with a tired pair of legs, I was happily seated at a roadside restaurant in Godavari, Lalitpur. The second part of the hike was to be a short stretch of walking along the Godavari hillside to Bajrabarahi. Mentally, I was committed to continue, but physically – I was again, not so sure. As fate would have it, the clock hit three before we left the restaurant, and as it turned out, it was a short drive* (about fifteen minutes) through the weathered road – to get to Bajrabarahi.

The hiking trail was as enjoyable, the company as awesome and the climb – as breathtaking as I had imagined. I was a little worried in the morning about the hike, but 14264 steps and 1500 burnt calories later, I went to bed physically exhausted, mentally a little overworked, yet psychologically satisfied, thinking to myself that I should do this more often.

8 thoughts on “Hiking from Lamatar to Godavari”