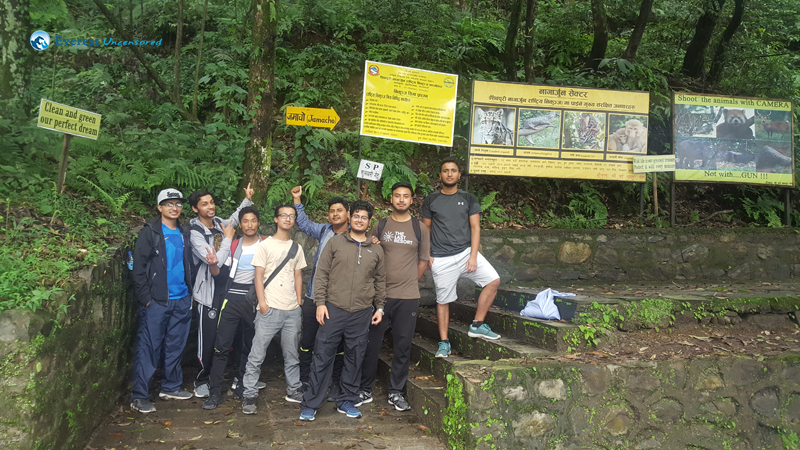 Squad A organized a one day hike to Jamacho Gumba on August 11, 2018. The hike was coordinated by Susan Pant. Participants gathered at 8:30 am in the morning. We carried water bottles, some snacks from office and headed to Nagarjun Forest Reserve on bus. On the way, we stopped at a local shop to have breakfast.

We reached the reserve around 10 am. We registered our names in the entrance gate and came to know that a guide was most for entering the forest. Jamacho Gumba, which was our final destination, could be reached from two paths. One was easier with steps while the other was uphill and more difficult. We chose the later.

Sunil Maharjan, our guide for that day, shared information about Shivapuri-Nagarjun National park as we began our hiking. We got to learn about Buffalo-Buddha, a monk that once meditated in Nagarjun forest, and how he got that name. The story was “ He remembered his buffaloes in his house which where hungry because he abandoned them and came to meditate. Then returned to his home, fed them and again came to Nagarjun for meditation. That’s how he got the name”. May be it was myth, but all of us was entertained by this story.

We got to learn about Buffalo-Buddha, a monk that once meditated in Nagarjun forest, and how he got that name.

It rained heavily the day before our hiking and we were aware of leeches in the forest. The first 2 km of the road was easy and steady. Then it was a steep uphill which was joined by leeches. We had taken salt with us so that we can get it away. But salt did not propel leeches.

Most of the hikers were attacked by leeches. It was scary as well seeing the feet bloody. With ascending steep uphill, removing leeches attached in shoes we finally reached Jamacho . The view of Kathmandu Valley from Jamacho was praiseworthy and remarkable. We took some photos and videos, had some snacks and finally decided to return. The returning route was easier as it was steps and free of leeches. So nobody had any problem. Finally we
returned to the gate.

Overall, it was an thrilling experience. We knew it was rainy and there were chances that leeches would attack us. But, we never imagined so large number of leeches sucking blood from our feet. However, the view from the top was worth it.

149 thoughts on “Hiking to Jamacho Gumba”