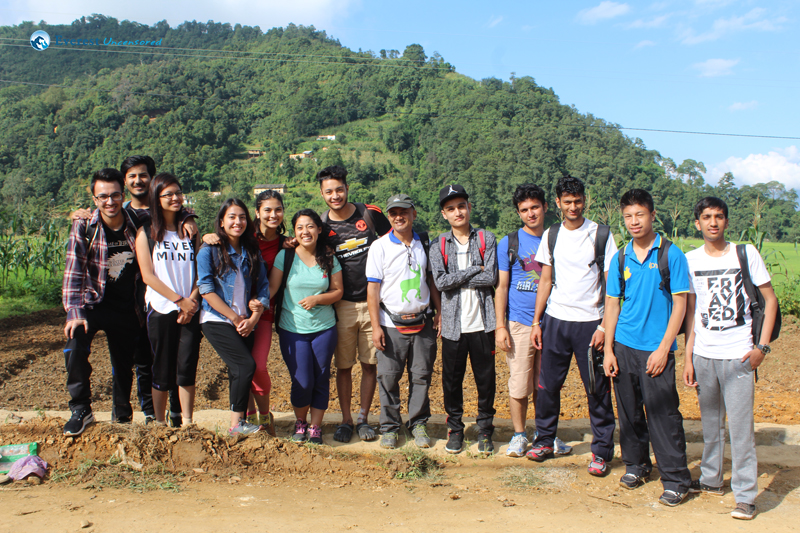 On 28th of August, 13 students along with the Campus Chief went on a hike from Gundu to Sanga. All the students gathered together for breakfast at a nearby eatery and headed off to enrich themselves with a perfect trip plan. On the way, Surendra Sir filled our bags with chips, cookies and other stuffs that could give us energy. All these foods kept on crossing my mind right from the start. Soon, the bus dropped us at Gundu and we started our hike. Our first destination was pilot baba ashram which was already a tough hike for me. We had to climb a hill and the rain had made the trail slippery and even more difficult. Crawling and climbing, we reached the top. I thought that we were half way through our hike; but no! we had not even completed the quarter of what was intended. The breathtaking views took all that pain away as it was as perfect as you can get!

After resting for a while at the ashram, we started hiking towards Asha Puri, our second destination. Then again, I was enlightened to the fact that we have to cross 2 other hills and that blew my mind! Obviously, if you climb a hill you have to descent at some point; and that point came rather early. We had to make our own trail through bushes and branches and slippery algae.

At many points I slipped; sometimes I even fell. After reaching the bottom of the hill, we were told that the place which we had arrived to was named Ladkeshwor which perfectly fitted in our context.

At many points I slipped; sometimes I even fell. After reaching the bottom of the hill, we were told that the place which we had arrived to was named Ladkeshwor which perfectly fitted in our context. Finally, we reached a temple and I hoped with all my heart that it was Asha Puri. But to my utter disappointment it was Doleshwor Mahadev and the milestone nearby read we had 6 more kilometers to reach Asha Puri.

We still had to scale a hill before we reached Asha Puri. On the way, many of us thought about giving up; but everyone knew that was not possible as we had nowhere to go. With a packet of glucose to regain our energy, we headed with full enthusiasm and intention which lasted for not more than 5 minutes. Tired and exhausted, we reached Asha Puri. We rested for quite a while and headed towards Sanga. After climbing for some time, we reached the top of the hill. The sight of the statue of Mahadev of Sanga gave us extreme relief as we knew now the destination was not too far. Soon with laughter and joy and enjoyment to the fullest, we reached Sanga which was indeed the end of our hike.
Had it been some other time, I wouldn’t have that courage to walk further but the craziest company and the beauty of the nature kept me moving. I had never even imagined to experience such astonishing moments. We crawled through the forest, played with the not-so-clean water and even slept on the highway. There were moments when I regretted coming to the hike as it was my first. Nevertheless, it was an incredible experience from the time we got there until we left.

DWIT Hiking Club organized a hike from Gundu to Sanga (Gundu – Pilot Baba Asram – Ashapuri mahadev – Sanga) on Sunday, the 28th August, 2016. To be honest, after the last hike I went on; a two-day hike to Chisapani, I wasn’t really keen on sending in my name for this one because I had barely been able to complete my last hike. However, I got persuaded by my classmates at the last minute after it turned out that only Students form our batch would be going. I figured it would be a great experience to go on a trip with just my close friends.

On the day of the hike, the hikers were requested to arrive at the college premises by 6:45 am. Dozens of sleepy faces were immediately re-energized by a quick breakfast at “Mama ko pasal” which is a popular spot among DWIT students to go for lunch. The 14 of us, including the hiking coordinator and vice president of the Hiking club Abhisekh Khatiwada, got into the Van provided by Deerwalk Inc. and arrived to the starting point of the hike – Gundu after a short drive.
We started the hike around 8:30 am and after a short walk, we came face-to-face with our first big task of climbing a hill which lead to a place called Ghyampe Danda which is home to the famous “Pilot Baba Ashram”. The climb uphill was a real struggle for everyone, except Bishal who amazingly always seems to have energy to burn.

By the time we got to the top (9:20 am), I could see that a few of my friends already regretted sending their names in for the hike. That feeling of regret only lasted a few minutes though as the view from a top Ghyampe Danda had everyone mesmerized.

By the time we got to the top (9:20 am), I could see that a few of my friends already regretted sending their names in for the hike. That feeling of regret only lasted a few minutes though as the view from a top Ghyampe Danda had everyone mesmerized. The surrounding was surrounded by greenery as far as the eye could see. After a short break at Pilot Baba Ashram and a quick meditation session, everyone had a spring in their steps.

As we all suspected, the next part of the hike was going downhill towards Ashapuri Mahadev. After all whatever goes up, must come down. The hike downhill was probably my favorite part of the hike as we had to find our own path through the dense forest. It felt amazing just to take a moment and look at my surroundings, my friends and their smiling faces, the green shrubs and bushes and just the overall air of enjoyment. We stopped at a few places to catch our breath and have light snacks which definitely helped the growing fatigue and hunger that had begun to take its toll on everyone, except again- Bishal.

We reached Doleshowr Mahadev at around noon. After spending about half an hour there just catching our breaths and getting re-energized, we began the long hike uphill towards Ashapuri and then finally Sanga. For me personally, and for many of my friends, especially the girls, this was the hardest part of the hike. It took us well over 2 hours to reach Ashapuri and another hour to reach Sanga form there. The utter feeling of relief when we finally saw the Deerwalk Van arrive to pick us up at Sanga cannot be put into words. Despite everything, we had finally completed the hike.
The most memorable aspect of the hike for me is bonding with my friends and looking out for each other. We spent a great deal just talking which helped us forget about the fatigue and pain but it also made us closer. I can confidently say that all 14 of us felt much closer to each other at the end of the hike than we did at the start. That is something I will cherish forever.