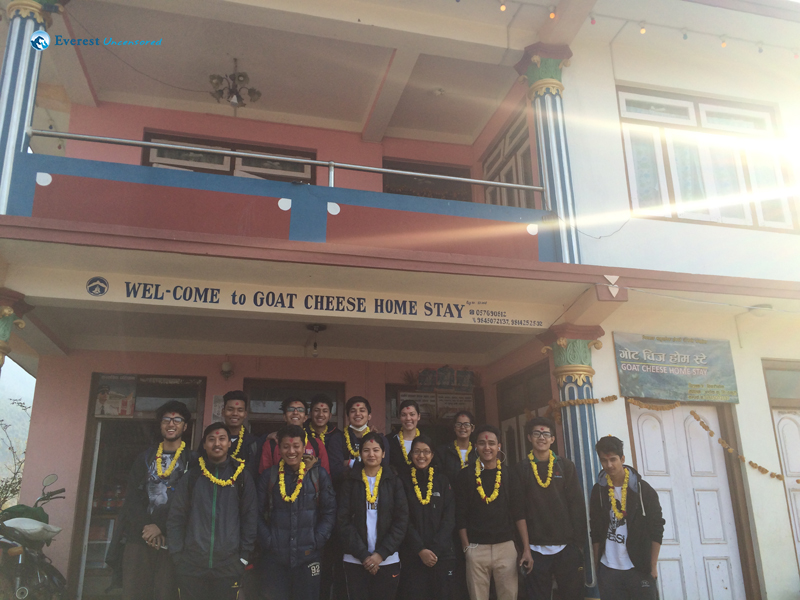 On 27th February, I woke up early, all excited for two days hike. I knew it was amazing place with natural scenarios. Gathering 15 people, we left the college at around 7:30 AM. We cracked some jokes and had fun on the micro bus; it made us more enthusiastic.

We reached Thankot at 9 AM and start walking from there after having a light breakfast. We reached Godam Chaur where the land was plain with natural grasses. Then, we headed towards Chitlang along a toughest path.

After walking for three hours, we sat down and ate our snacks. After having the snacks for refreshment, Mr. Pratik Budhathoki showed some of his unwanted gymnastic skills.

After a few minutes of walk along a muddy road which was difficult to walk, we somehow walked and reached towards a jungle. After walking for three hours, we sat down and ate our snacks. After having the snacks for refreshment, Mr. Pratik Budhathoki showed some of his unwanted gymnastic skills. Then, we reached Chitlang (Makwanpur) at around 2 PM and headed towards Goat Cheese Homestay, where we had to spend the whole night. We saw lots of houses cracked due to the devastated earthquake and many people had left the place. On the way, we could feel fresh air and natural beauties were all around. Finally, we reached on Goat Cheese Homestay which was a mind-blowing place, mind-blowing in a sense that the customer service was brilliant. The owner, Amar Singh Thakuri, entertained us with lunch, cheese and wine. He shared us his love towards Nepal. After the lunch, we moved towards Chitlang Bazar to enjoy the view. At night, we had a delicious dinner followed by barbeque; we danced too and it was fun! Since all of the hikers were tired, all of us felt asleep very fast.

The next day (28th February), we started our hike towards Indrasarovar and then to Kulekhani. It was morning time; we had a lot of energy and this helped us walk faster. On the way, there were amazing scenarios and a beautiful lake was seen which was Indrasarovar lake. The lake was very beautiful. We sat down beside the lake and had some snacks. Then we did boating and went towards the bridge of the lake from where the view was absolutely fantastic. It felt like we were in heaven. We also saw the football ground which was as beautiful as Emirates Stadium. Then we headed towards Kulekhani, where the college van had already arrived. On the way, we had our meal and sat down on the van and went to the college. In overall, the hike was awesome and it was the best hike ever in DWIT. It made every hiker happy and well fulfilled the theme of the hiking which was happiness.

On 27th January, 15 people gathered in Deerwalk complex for the two days hike organized by the Hiking Club. The main destinations of the hike were Chitlang and Indrasarovar. All the partakers of the hike were eager to begin the hike. The team took off from Deerwalk Complex at 7:30 am. On the way, we bought some snacks in a grocery store for the adventure we were about to embark on. We then reached Godam Chaur at about 9 after passing through Kalanki and Thankot. Then our actual hike started as we went on foot towards Chitlang. We had to walk around 13 km to reach Chitlang. At first, we climbed the hills with excitement, but the uphill got to us eventually and everyone was giving their best not to lose composure. After the struggle, we reached the topmost part of the hills and started our downhill. Along the way, we had some snacks and reached Chitlang watching the beautiful sceneries.

All our sweat felt worth it after we reached Chitlang. The club had booked our stay in Nepal’s very first Goat Cheese Factory which also had a Homestay. We were immediately greeted with some adorable baby goats. Everyone was tired so we rested for some time, had our lunch with complementary glass of wine and some samples of Goat’s Cheese. Some stayed in the homestay and some wandered off to the farmlands and the village of Chitlang. All hikers returned in the evening and then we had our dinner. We had also planned to have barbeque and campfire (but without the camps). At about 9 pm, all of us gathered and had our barbeque, made by our own student chefs of DWIT. Everyone was having a good time. Then at about 11, everyone went off to their rooms to recharge their energy for tomorrow.

We had to reach Indrasarovar the next day. Many of the hikers hadn’t been there previously so a new sense of excitement was present among the hikers. We bid farewell to the amazing people there at the homestay who were very cooperative and friendly. We then hiked towards Indrasarovar passing through Chitlang. The route was amazing as we had to pass through a forest sort of place with only a single trail to walk on. After a while we reached our destination and the view was breathtaking. The lake was magnificent and so was the environment. There was also a suspension bridge in that area. The view from that bridge was one of the best. I was so fascinated that I wanted to spend the day in that place, but obviously we had to return. Then at about 12, we headed towards Kulekhani. The way was pitched but as we had hiked some distance before, it was not easy to reach our end. A Deerwalk transport was present there in Markhu which was such a pleasant sight. We had our final meal there and then started to make our way to Kathmandu through Pharping.

To sum up the two days, it was one of the best. The places we had been to were incredible. I sincerely thank Hiking Club for organizing this hike and I hope there are more to come.

To sum up the two days, it was one of the best. The places we had been to were incredible. I sincerely thank Hiking Club for organizing this hike and I hope there are more to come.