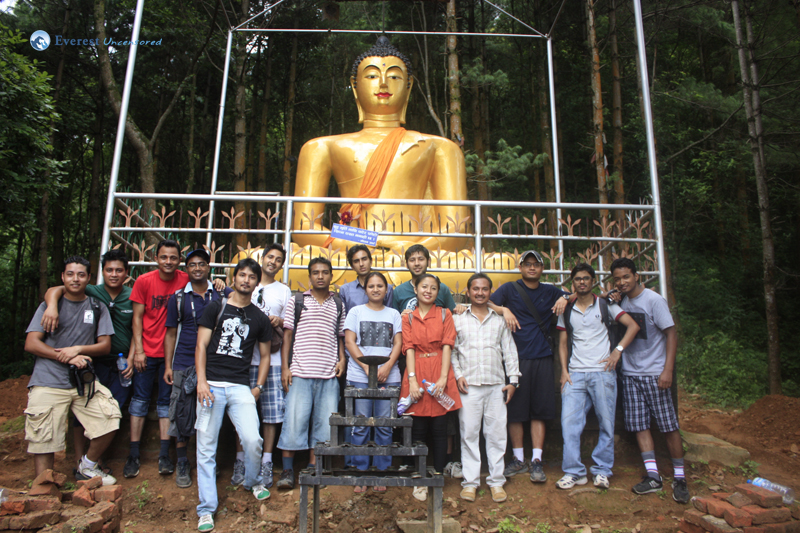 Hiking – a word that indicates walking in natural environments. How could I miss the call of nature? Geared up for the first official hike on 10th August, 2013 from Deerwalk, I reached office at 7:25 am and waited for other colleagues. We were altogether 15 members for the hike and the route was from Thankot to Kirtipur. We took office vehicle and reached Thankot, and then the real fun started.

A simple question – who knows the route? And guess what, no one among us knew the way. And that mystery added more adventure to our hike. We bought some snacks and bottles of mineral water for boosting up our energy throughout the hike. As we all were illiterate about the route, we were compelled to ask the local people out there. Everyone had different answers for our question. We were puzzled and then we followed the way an old man suggested.

Rainy season, climbing in jungle, how can we be protected from leeches? It seemed like we were being ambushed by leeches so that they could feed on our blood. Just after 3 or 4 minutes of climbing, we were all attacked by leeches which resulted in a swift return downhill. The other way however made us feel like we were not hiking but just walking a normal road. Cracking jokes, non-stop random talks, and teasing one-another and so on didn’t make us feel bored. Photo session went on in every step of our hike. We were slowly heading towards our destination – Kirtipur.

All tired legs, when we reached our final destination, then after we decided to rest and have some heavy diet for regaining the loss of energy. There was no other choice than going to LAHANA. After all, it is one of the most famous places for the perfect Newari cuisines. After we were done with our snacks, we called the office vehicle to pick us up from Kirtipur. As the last benchers of the van we never ceased making noise. Singing songs and moving our body with the flow of the songs continued all along the way through. The day was so memorable and fun-filled that we wanted to stop time and continue the moment. But time waits for none and we reached office premises dropping all other colleagues on their way to home.

To sum up the day, I got a chance to break free with all my fellow Deerwalk employee who had participated. It helped me to know them in a more personal level.. CHEERS TO DEERWALKERS !!!

Hiking in the season of monsoon is not only adventurous but also pleasant. Slippery paths and leech attack make it adventurous and beautiful landscape and greenery makes it pleasant. I am Sudhir Gautam and I have been a Deerwalk employee for a little over 2 months and this is my first hike since I joined Deerwalk.

Our group consisted of 15 hikers and someone told me that this was the first time that all of the hikers in the hiking list had actually showed up on the day. The hike was on 10th August and was from Thankot to Kiritipur. I reached Deerwalk premises at around 7:30 am, and made way for Thankot thereafter.

We started our hiking from Thankot check post. No one really knew the exact route of the hike so we started asking the local people. The trails were not hard. Walking in a group with beautiful scenery around is always a great experience. After around 2 hours of walk we reached Matatirtha where we enjoyed watching a football penalty shootout being played by the local people. The audience was cheering up the players by playing trumpet and shouting on every shot.

We continued our journey from there on, and after another 2 hours of walking we reached our destination, Uma Maheshwor Temple of Kirtipur, which is the second highest point after Shwoyambhu in Kathmandu valley. After resting there in the temple for some time, we went to one of the famous newari khaja ghars in Kirtipur to have a lunch, Lahana.

In short, the hike was fun and I had a great time with my fellow Deerwalk hikers.

It was August 10, 2013, Saturday at 8:30 am when we were on a hike from Thankot to Kirtipur. It was my second hike from Deerwalk Services so I was very excited. We were all together 15 member in total. I was picked up at Kalanki. We started our journey from the entrance near Thankot. The weather was sunny throughout, a good day for hiking. We had trouble with the route and asked directions along the way.

We took an uphill path which was infested with leeches. We gave up on that path as it had a dead end. Along the way we started to communicate in the ‘Tit Tit’ and ‘Tot Tot’ code language. You had to be there to understand that. After a 5 hour walk we reached Kirtipur Village. It allowed beautiful view of the valley and was a major tourist attraction. We get on the top part of the Kirtipur village rested at the temple there. We had our lunch at ‘Lahana’ restaurant which is pretty famous amongst the Kathmanduities.

It was a successful hike capped off with amazing time at Lahana. I shall cherish the memories made on the day.

12 thoughts on “Hiking from Thankot to Kirtipur via Matatirtha”