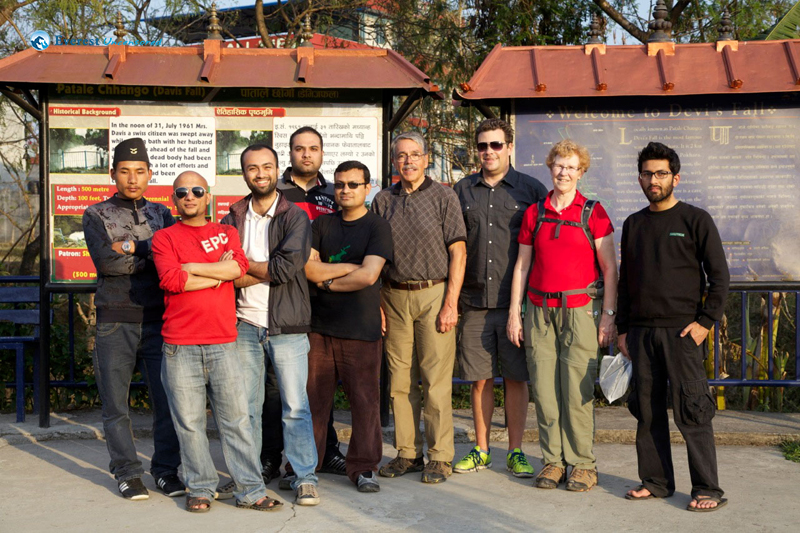 Hiking is fun, and when the destination is Pokhara, the FUN gets multiplied by 3. 8th March, 2014 was different for me from other Saturdays. Waking up at 5 in the morning was what made it different. Winter seemed to have ended in Kathmandu, the morning was not cold, but just cool. Me and Pawan Sharma got picked up by Deerwalk Van at 7 A.M. from outside my house at Dhunga Adda. The journey then began in full speed – Highway to Pokhara. Jeff Rick and his parents (John and Judy Rick) were enjoying the ride to the fullest. Highway along the hills was as fascinating as ever and every one of us in the van was enjoying the ride.

We stopped by at Galchi for breakfast, then headed in full pace towards our destination. We reached Pokhara at around 2 PM. Checked in at our hotel, freshened up then moved out for lunch. Firewood pizza was delicious. Our lungs could tell that we were not in Kathmandu, fresh air of Pokhara filled in some more energy in us. We then headed over to International Mountain Museum. After a brief tour inside the museum, we headed to Gupteshwor Mahadev Cave and Davis Falls. We then headed over to Pame. We enjoyed the view and some heavy snacks in Pame and headed back to Lake Side where we were staying. It was dark already and night is when people can enjoy Lake Side at it best. We went to BusyBee cafe for some live music and drink. It was much fun out there. The tiring day was over. We headed back to our hotel and slept.

We woke up at 5 am again, the plan was to walk to Sarangkot to see the sunrise. We could not make it out to the top of Sarangkot as the road was blocked, but reached some significant height and were able to witness the first rays of sun fall over Annapurna Mountain Range. The views were jaw-dropping. We then headed back went to Bindhya Basini Temple and then to Fewa lake for boating. After an hour of roaming around in water, we went to Talbahari Temple.

It was almost 11 A.M, Jeff Rick was in Sarangkot for paragliding and it was almost time for him to land. We went to the drop off point with his parents to see him land.

It was fun to see the ‘Big Guy’ flying.

It was fun to see the ‘Big Guy’ flying. We then returned back to our hotel, checked out and headed out for lunch. We had to wait long for our food but the taste was worth the wait.

We then headed back to Kathmandu at around 2 PM. Thankfully, the road was free that day and we reached the valley without much hassle.

Thank you Deerwalk for the nice time out in Pokhara.

On Saturday, the hike started from the Deerwalk premises. We drove past Thankot by 9 am and reached Galchi where we stopped for breakfast. After breakfast we drove towards Pokhara. Everyone seemed to be enjoying the fresh air and the beautiful scenery. We stopped for some time in Kurintar for some photos and continued our drive then after. The drive was quite difficult for us. Finally we reached Pokhara at around 2 pm. We stopped by the hotel for some refreshments before getting ready to explore the place.

Around 3 pm we moved towards International Mountain Museum where we saw different aspects of mountaineering. It was informative. After that we went to Gupteshwor Mahadev Cave and then we went to Davis Fall where we took some snaps. At around 8:00 pm we returned to the hotel.

The next day, we started our trip early morning around 5-5:30 am by van. Sarangkot hill is very popular for its mountains and sunrise view. Normally sun rises at 6 am. After the sunrise and Mountain View we came down from Sarangkot. We also went to Bindhya Basini Temple. We took some photos and headed towards hotel by the lakeside.

After breakfast we picked up John and Judi for boating and we enjoyed boating around the lake. We went to Talbahari Temple and took some photos. Jeff tried his hands on paragliding and shared some experiences with us. Then we moved back to our hotel.

At around 12:00 a.m. we checked out from the hotel. After lunch we headed back to Kathmandu. It was good fun while it lasted but it was time to return to the daily routine back in the valley.

Thanks for a great time.