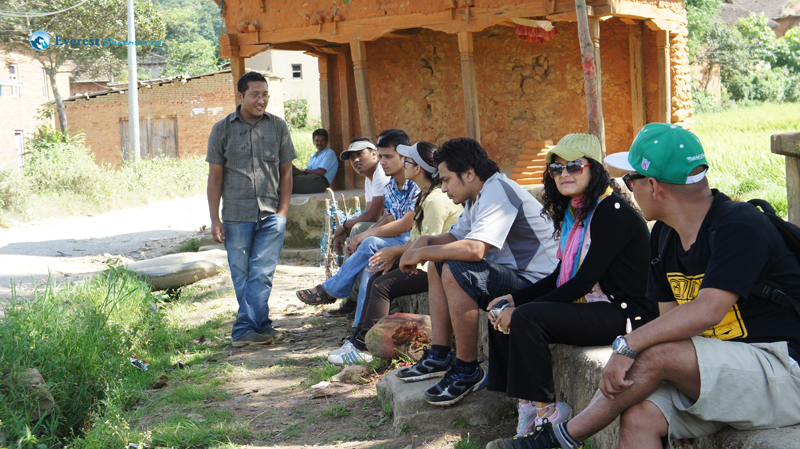 I was in our office premises, waiting and excited. Thought we had planned to meet at 7:00, we were already late. It was almost 8:00 when we left the office with 5 hikers, and on the way there were 4 other who would join us. The route was from Lakuri Bhanjyang to Gundu. With our entire plan ready, we stopped for breakfast of tea, eggs and pea soup at Lubhu. We kept it light, keeping in mind the difficult hike up towards Lakuri Bhanjyang. However, as we reached the base of the hill, Kedar dai realized that the road was good enough for the Deerwalk van to go all the way up. In a mere 20 minutes we reached the village atop the hill.

To our amazement, a cave had been recently discovered in the region. Kedar dai, who had never seen one before, was the most excited to go. Some of us feared wild animals that could be living in the cave. After hearing that Kedar dai had wrestled them all when he was a little boy, we were no longer afraid. Had we not begun with heaps of excitement, we would have never made it to the cave. Despite the villagers’ claims to have cleaned up the trail, it reeked of dead animals. Even though, it had been sunny all morning, the trail was soggy. We reached the tiny opening on the bottom of a rock in about 20 minutes. Water was spouting out from just about everywhere, and along with it, earthworms! There was a proliferation of slimy creatures all over the place. It was dark so it took us a few minutes to figure out that we were being attacked by leeches from all directions. Despite heavy reluctance, we entered the dark cave, and were welcomed by a statue of what looked like a sage. The cave wasn’t as large as we expected it to be or maybe it was, and we missed it. The number of bats that were startled from the flash of our cameras indicated that the cave must have been bigger that what we saw. We didn’t wait too long to find out. The way back, some of us literally ran to prevent being ravaged by creepy crawlies. When back at the village, we had an average of four leeches in our shoes. Kiran commended our energy and commitment, even at moments of fear and disgust, as the True-Hiker Spirit.

The first part of our hike was pretty uneasy, but it hadn’t beaten down our morale. The aftermath was that, every time strands of grass, or even shoelaces, came with contact with the skin, we felt a shudder go through our bodies. We headed eastwards towards Bhaktapur. It was comfortably sunny, with a gentle breeze indicative of the Dashain that was coming soon. The bicycle trails that we walked on were outlined with pine trees and wild flowers. Our destination was barely visible even from the heights that we descended and we wondered if we could actually walk such a long way. But as we travelled farther, we forgot about the distance remaining and concentrated on the beauty of the vicinity. When the slopes became more gradual, lush cultivated fields of ripening rice appeared. Some trails turned into orchards, amongst which were fruit trees such as guava, persimmon and oranges. Domestic cows and goats grazed on green pastures, definitely fatter and happier than in the city. Underneath a traditional Bar-Peepal setup in Gundu village, a humdrum of relaxed farmers talking about politics could be heard. The farmers told us how to get to the main road.

By the end of the hike, we had fallen in love with the place. We sat under a local tea shop and stared out quietly until Kedar dai picked us up and took us back. We stopped at Sinamangal Thakali for lunch after which everyone split to their way home.

0 thoughts on “Hiking from Lakuri Bhanjyang to Gundu”