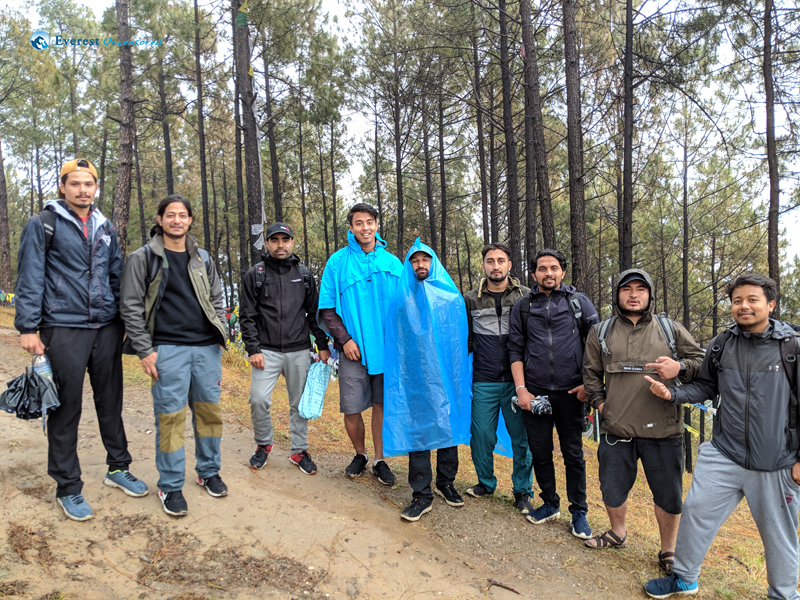 Nabin Pandey
With the cloudy environment and the heavy rainfall from the early morning it seemed the hike wouldn’t be made out but with the courage and determination it was explored with beautiful moments.

The hikers pushed off from Kapan by having the energizing breakfast. With the start of the trail we went through the uphill trail of beautiful pine forest with the beautiful music. Initially, it seems there might be the problem in the trail due to the slippery pathway and the rainfall, but the crew of almost 60 people come over who were on the way of our hike. Despite the rainfall and slippery path we went along with them by having umbrella and raincoat. After a while the weather even supported us, as high up the trail the beautiful scenario appeared and we took photographs in different places.The place seemed calm and quiet until we made our way through the narrow trail that led us to a small village. A short hike from there we reached the top where we could get a glimpse of the peak, Tarebhir (2100m). By then, we were sure about atleast one thing- the hike wasn’t going to be easy.

After getting a nice view of the Himalayas on the other side, we started our hike downhill. Descending was quite easy, and with in two hours we reached other lower side of Budhanilkantha.

With the cloudy nature in the Tarebhir we had light snacks and rush towards for lunch and in the meantime we come down to sukedhara and had lunch.