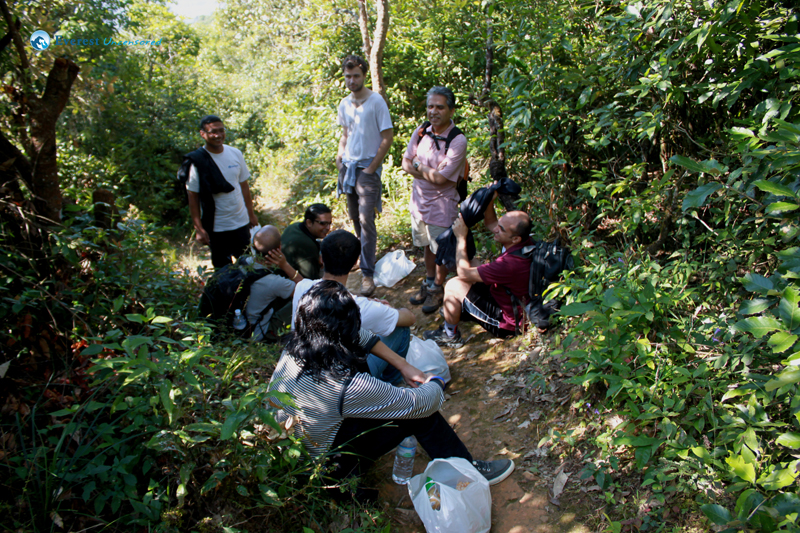 Lakure Bhanjyang, or Lakuri Bhanjyang as some call it, is a scenic hiking route about 10 Kilometers from Kathmandu. The trail is not extra-ordinary in any manner for a country packed with 8 thousand meter mountains and uncountable others that stand more than 4 thousand meters tall. Compare those to the highest point we reached during the hike, which must have been around 3,000 odd meters and, you will see why we didn’t bother to get the exact number. And then again we have traveled through it so many times that we have started remembering good spots to take breaks and relieve ourselves.

The thing about Lakure Bhanjyang though is that, in my opinion, it is one of the most scenic hiking trails within 10KMs of the Kathmandu Valley. It is also not so steep that you have to literally crawl uphill, but it is not a walk in a park either. You will have to work your legs for around two-three hours to get to the top and come back down. For the denizens of the sea shores and other city dwellers married to their computers, 2 to 3 hours of straight 45 degree uphill reaching 3,000 meters in altitude can be considered good exercise. This is the reason why we chose to scale the hill that lies between Godavari and Lakuri Bhanjyang yet again, on that fine Sunday of November 3rd, 2013.

As is the tradition for a Deerwalk hike, we gathered around at the Deerwalk campus early in the morning and started our trip at around 8:30 am after a round of tea. The interesting thing about this trail is that it can be started from several different points. After a verbal discourse in the Deerwalk van about the pros and the cons of each starting point we decided to start at Godavari conveniently letting us shop for our supply of food and beverages at Koteshwor. When we reached Godavari everybody was famished and so we sat down at a small restaurant for boiled eggs, tea and a couple of rounds of Flush.

It must have been around 9:30 or 10:00 when we started climbing. Luckily the sun wasn’t so hard, as is usual for the month of November, and the weather was cool. Ten minutes into the climb and we started taking off our sweaters, jackets and other warm clothing items. My feet started burning after another 10 minutes which was accompanied by severe thumping around my chest area. Then I began to wonder why I brought such a huge back-pack. 20 minutes before it was empty and easy to carry but filled now with 15 cans of beer and other food, I was getting tempted to just throw it in the bushes when nobody was looking. Fortunately I have been hiking frequently and I knew that it was the first 30 minutes that was the hardest. The most important thing that kept us going was the chilled beers that we would get to drink plenty of when we get to the top.

One step at a time and rest pauses in between; we walked slowly, chatting on occasions with the locals going downhill, unable to contain their laughter at our unjustified exhaustion. The Godavari Fish Farming and Godavari marble factory were left behind as we plodded on for about two hours. There was a big field on the top of the hill and we all felt a sense of accomplishment when we reached it. We took out the beers that had been frozen on purpose and we let it thaw for a while. We chatted about things ranging from current office affairs to whimsical business ideas that we could potentially pursue. We even made a new friend from Germany when we offered beers to a lonely foreigner who was also hiking around the area.

Then it was time to come down hill. Following Robert Frost’s advice we followed the path less traveled in the hope of cutting some time and we landed in the middle of a forest filled with thorns and needles. We bulldozed our way through the thorns for about fifteen minutes and we were relieved to find the road with our beloved restaurant right in front of us. We had reached Lakuri Bhanjyang. What a pleasure it was to rest our tired legs and have good local food. As always we enjoyed a few round of cards and called our van in the evening to return home.

The trip was memorable as always and we were all proud over what we had accomplished.

I have gone to several Deerwalk hikes but this one was my first with our Chairman as one of our hiking companions and thought it would be a bit different than the usual trips. We left the office premises around 8:30am and headed for our hiking trail of Godavari to Lakuri Bhanjyang, which, though sounded pretty common route, was new to me. It was fun listening to rapport and discussion about culture, politics, works, food, etc along our ride.

We had our breakfast at Godavari— some eggs and Chana, and played a round of flush. Most of us had not brought bags for the hike, which Pramod and Kapil pointed out, so some of us ended up carrying things in plastic bags. As we walked the uphill road, it got more and more pleasing with shades of tall trees and sun lights piercing through them. The path was a typical hiking trail, steep and raw, with jungle on both sides.

Since the sun was high, we took multiple rests. Interestingly, we found a lot of big earthworms on our way and it looked as though they were out for sun-bathing. After crossing 2 small hillocks, we reached the top of the Godavari hill. It took us around 2 hours. The weather, scenery around, trees, and the place itself was cool and pleasing. We spent about 1 hour there engaging ourselves with casual chats, snacks and drinks. In the mean time, a German tourist appeared out of nowhere with whom Rudra and Pramod had a nice conversation about IT and manpower. Lava was banned for talking for 15 minutes there by Rudra—a fun part. From the top, we walked for about 15-20 minutes to reach Lakuri Bhanjyang. The last downturn route was interesting. There was arely any human foot trail, but it was nice getting rid of the bushes down to the road, on the side of which Lakuri Bhanjyang height was standing. We went on to a small hotel for our lunch. All food available were great—sukuti, chhang, vegetable, and local chicken. We played second round of cards there, marriage. It was fun to lose. A local kid there was calling all of us ‘uncle’.

Around 3pm, we made our walk down from Lakuri Bhanjyang, meeting our office van after 10 minutes walk. Overall, the hike was great for me, not only because of the fun I had but also because I learned a few new things along the trip.

9 thoughts on “Hiking from Godavari to Lakuri Bhanjyang”