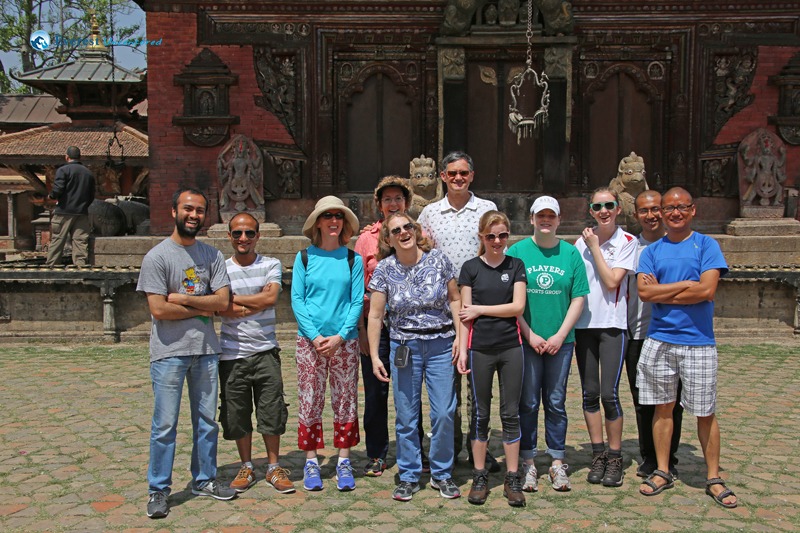 The drive from Annapurna hotel to the area where we started the hike was around an hour. From there, we spent half an hour touring a temple and then we started the actual hike. It was mandatory for each of us to have at least one full bottle of water, a snack (a snickers bar was provided for us), and juice. Our group consisted of eight people along with four people from Deerwalk. Then, we started along the trail. Our group had been given two options, to either take the “long way” which was four hours or the “shorter way” which split that time in half. The long (and beautiful) way was unanimously decided upon. We had decided to do a first part and then a second part later after lunch. Even from the start, the soon to be long walk had beautiful scenery. We passed by many shacks with many people sitting on their porches or working around their house. The first trail we walked on was made of concrete and easy to walk on; however later on, the path had dusty areas and rocky areas. There were some tough parts like when the road became narrow and a bit steep, but with enough balance and steadiness, it was manageable. The scenery was beautiful. There was not only a leafy, green, and lush forest but also small villages with curious people to see. It was perfect for pictures. After hiking (it was mostly just an inclined path) for an hour and a half, our group sat down in a local, authentic place to eat lunch. The food was delicious; it was a sturdy and healthy meal for what we had walked and what lay ahead. After lunch, two people from the group decided to be driven to the hotel instead of more walking.

The second part was honestly more challenging than the first part but a lot more rewarding.

The second part was honestly more challenging than the first part but a lot more rewarding. We had seen villages, some people, and a few animals, but in the second section of this hike, we were able to really enter a different world. The first thing we had to do was climb many stairs, after this we were able to see a beautiful temple. We plunged into the Nepalese culture. Along the trail we continued on, we saw many chickens as well as goats and cows. The noise was either buzzing with the natural sounds of nature and forest or with the constant sounds emitted from the animals. It was like traveling in a totally different area. Also along the hike, we were able to see many corn fields and mushrooms “houses”. There were many curious villagers who came out and stated the usual greeting “namaste” with twin palms touching and smiles on their faces. With all of these factors incorporated in this hike, the group was able to take amazing pictures and have a fun experience hiking across the Himalayan mountains.

4 thoughts on “Hiking from Changu Narayan to Nagarkot”