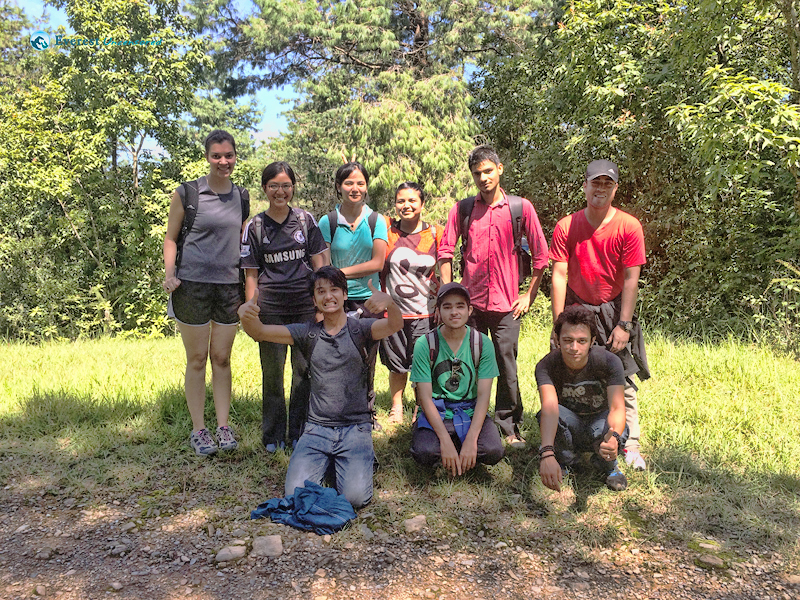 Hilary Towle
I joined the Hiking Club for my first hike at Deerwalk this past Sunday, July 26, 2015. I was a little nervous when I first signed up because I don’t do a lot of hiking in the states, and I wasn’t sure how difficult this hike would be. We spent about two hours in the car before arriving at our starting point for the hike. Right off the bat there were a ton of steps we had to climb. That was an abrupt introduction to the hike. Eventually the steps ended and we hiked along a path through some of the rural hill region, and then ended up on a road which we followed all the way to the Namo Buddha Monastery. The Monastery grounds were breathtakingly beautiful. We had fabulous views from all the way up top, and the Monastery itself was a work of art. We spent about an hour at the Monastery before winding our way back down the “mountain,” stopping a couple of times for a snack break, and eventually followed one road through some rural villages until we found our van again. The van was a welcome sight for all of us. It was a long but beautiful day of hiking, and I’m very glad I was able to go.

Rojina Karki
Namobuddha is not an unfamiliar place for me because I have been there two times. But the thing that made this hike wonderful and amazing was “hike with friends”. This was my first hike and it was so much fun. I planned many times on joining the hike before, but I never gave my name. If I think about the reasons behind not joining before, I can give lots of excuses, but when I finally decided on joining the hike to Namobuddha and went there with friends, I regretted that I never tried before. It was tiring but what matter most to me was the fun, excitement and experience we had together.

We started the hike from Dhulikhel at 9:30 am. We climbed 1000 step ladder and during that time we were telling each other that we have finished climbing 500 steps, but after some time we noticed that we had already finished climbing 1000 steps. That was really amazing. At first we were worried about how to climb 1000 step ladder but the support of friends and talk in-between never made us realize that we were already half way through and a little more to go.

When we reached our destination, we were so exhausted. So after taking a short break, we look around Namobuddha. I learned how to pray Buddha from Sharun Sangat, batch mate. After that we took a path to Panauti. The way from Namobuddha to Panauti was exciting and also tiring at the same time. Exciting because finally we were returning back and tiring because of hungry stomach and aching feet and legs. After we reached Panauti, we had very delicious dinner. I am happy that I joined the hike and looking forward to be part of it in future too.

5 thoughts on “Hiking from Dhulikhel to Namobuddha”