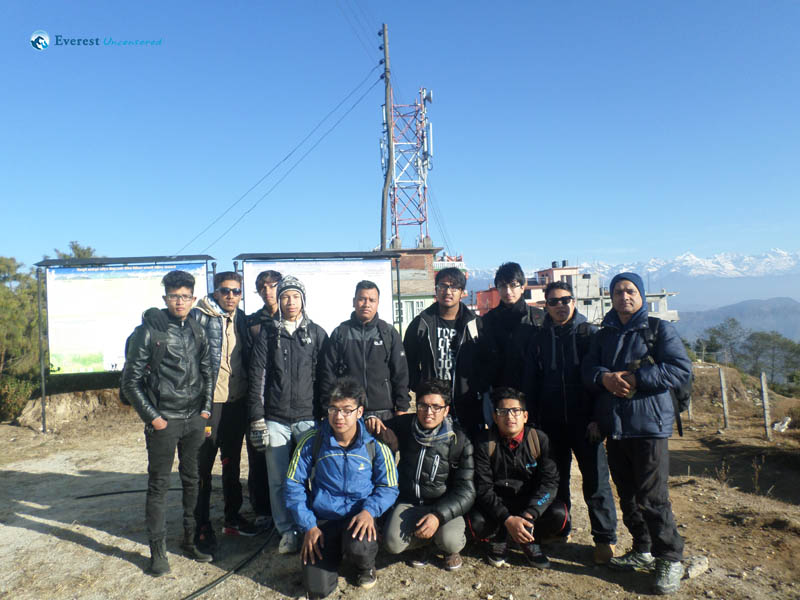 Anil Khand Thakuri
An email message addressing a two day hiking trip was sent by the Hiking Club. It really got me excited and I immediately sent my name for the trip. After I saw my name in the list of participants, I was really happy and was looking forward to going on the trip. On 17th Jan 2015, I was with my friends in DWIT premises, waiting for the hike to begin. The hike was from Kathmandu – Sundarijal – Mulkhara – Chisapani – Tea Garden – Lapshifedi – Kathmandu.

It took 40 minutes to reach our first destination, Sundarijal. As all the members in the group were boys and we wanted to make the hike more exciting, we took difficult and alternative paths. Along the way, we saw the Sundarijal Hydro plant. After some time, we were in the middle of nowhere in a hilly forest, then we were stunned to see a waterfall. We were really careful to approach the waterfall as Surendra sir had warned us about a previous hike incident.

Then we headed towards the Shivapuri National park, filled with beauty and wilderness. We estimated to reach our destination around 4:00 PM but we reached there around 5:45 PM. As the hike was long, everyone was exhausted, so we headed towards the lodge we were planning to spend the night. We had some snacks, Chowmein and Thukppa. After that, we started a campfire and talked. We also got a chance to listen to Bijay Sirs original songs and we barbequed some chicken, then after some time we called it a day and decided to rest for the night.

we were in the middle of nowhere in a hilly forest, then we were stunned to see a waterfall. Along the way, we saw the Sundarijal Hydro plant and a Trout farm

Next morning, it was cold. The water was almost freezing. We had our breakfast at 7:30 AM and continued our hike. All of us were exhausted because of the hike the day before. We went to Everest Tea Garden. Along the way, we also saw a Trout farm. Tired and exhausted, we took help of the branches of tea plants to climb our way. After a 30 min climb, we reached the top and headed to Bhotechaur. Like the day before, we took difficult and alternative paths to reach Bhotechaur.
Finally we were at Chauki where the Deerwalk van was waiting for us. We were extremely exhausted and were desperate to sleep. We checked in Hotel Mountain view at Lapshiphedi and had our dinner. Immediately after dinner, we jumped on our beds and got some sleep. The next day we returned back home. It was a trip full of memories.

Rojan Maharjan
The third weekend of the year 2015 was chosen as the weekend, to have Deerwalk’s first ever two day hike. On the first day, i.e. January 17, we gathered at the Deerwalk complex at 8:45 am and started our journey at around 9 am. We got in the Deerwalk van, and got out of Deerwalk complex and towards Ring road. Our first stop was at Bhat-Bhateni, Boudha where Surendra sir and Bijaya sir, went ahead and bought all the necessary items for the hike, like food, drinks, etc. After all the necessary items were bought, we headed towards Sundarijal. It took about 40 minutes to reach Sundarijal, and there we left the van and started the actual hike.

We were all filled with energy and excitement as we headed towards the sundarijal hydro power plant. After some time, we stopped and took a few photos. Surendra sir suggested that we take an alternate route through the forest. It was a much more demanding route, than just taking the stairs, as we had to climb up the hilly forest area, towards the power plant. Until passing through that path, I think every student there had underestimated the difficulty of the hike. That was the first hike for many of us, so that passage gave us the idea of how difficult the remainder of the hike was going to be. We stopped at a waterfall and rested for about half an hour, where we took some photos and had some refreshments. We continued to go towards the power plant, and on the way we talked with some local people about the route, and headed towards the power plant. Nearby the power plant, we stopped for some water. The water reservoir was filled almost to capacity, due to the rainfall a few weeks ago. On the way, Surendra sir reminisced about the previous hikes he had gone to, and the incidents which happened during those hikes.

We climbed the hill on the support of the branches of the tea plants. This was the most difficult part of the hike, for me.

The trail was filled with beautiful scenery of the National park, so everyone was taking photos, determined to win the 500 rs prize, which was announced for the best photo of the hike. After about 3 or 4 hours, many of us were exhausted, so we had to stop frequently. Surendra sir had estimated that we would reach our destination, Chisapani at around 4, so I was expecting the same, but little did I know that our exhaustion and frequent stops had slowed our pace, and we didn’t reach Chisapani until 5:30 pm. I felt kind of relieved, and happy to see human settlement, after the long and tiring day of the hike in the wilderness. We reached our lodge at about 5:45 and went to our rooms, where we had some tea, and biscuits. After settling in our rooms and resting for a while, we headed to the dining area for some chowmein and thupka. Everyone felt their energy rejuvenating after the meal. We went back to our room, and we talked for a while. Then, we were called to sit around a camp fire, where we barbequed some chicken and shared our fun memories with each other. Bijaya sir entertained us with some of his original songs, and then we sang and joked around till about 9 pm. Then we had our dinner, and returned to our rooms, for the night. We talked and played cards till around midnight, and then we fell asleep.

The next morning, we learned why the place was called Chisapani, as we went to wash our faces. The water was at almost freezing temperatures. At around 7:30, we had some breakfast, and after filling our water bottles, we checked out of our lodge and continued on our journey. Only then did we feel the impact of the previous day’s hike. Many of us had mild muscle pain, but ignoring the pain, we continued our journey. The route was quite different than what we experienced the previous day, as the trail was wide enough for motorcycles, and we had to travel mostly downhill. We stopped at a place called Hile, where we drank some fruity juice, from a local vendor. Then, we continued towards Everest tea garden, or sano Illam as it is called by most. Our pace was slower than that of the previous day, due to fatigue and muscle ache, but we stopped only to fill water, and to regroup, since the trail was mostly downhill. At around 1 pm, we reached the bottom of the hill, and we saw a trout farm.

We rested for a while, then we continued and reached the tea garden. There the hills were full of tea plants, which made a beautiful scenery. We had to climb one of those hills, which I did not expect. We climbed the hill on the support of the branches of the tea plants. This was the most difficult part of the hike, for me. The steep hill had only the tea plants to support us. There was no fixed route or trail for us to follow. We had to grab the plants and climb up. We found a place in the hill, where we could rest, and so we did for a while. By this time, everyone was fairly tired, so we ate some food, and rested for a while.

Then we continued climbing the hill. After about 30 minutes of climbing, we reached the top, where we took some photos, and had some tea. Then, we went on with our trip, towards bhotechaur. There we passed through a village, and then into a jungle, with a slippery trail. Luckily, none of us fell down, or got injured. This was the final part of the hike, where we had a choice to take the easier way, through the road, or the more challenging trail. Surendra sir pointed out that the two days hike had to end on something memorable, so we took the difficult route.

Finally we reached Chauki, where the Deerwalk van was waiting for us. We got in the bus, and we could feel the muscle in our body aching, but we were elated, and proud of ourselves, because of the completion of the hike, which was not an easy one. We went on to hotel Mountain View in lapsiphedi, where we had our late lunch / afternoon meal, and officially ended the two day hike. The Van took us back to Deerwalk, and we headed back to our respected homes.

Overall, It was a very enjoyable trip, and our coordinator, Abishek Khatiwada did a fantastic job, of planning out the 2 day hike. It was my first hike as a Deerwalk Student, and I am glad to say that it won’t be my last. I look forward to more hikes with my fellow deerwalkers, and hope that each one will be as good as this one.

128 thoughts on “Hiking to Chisapani”