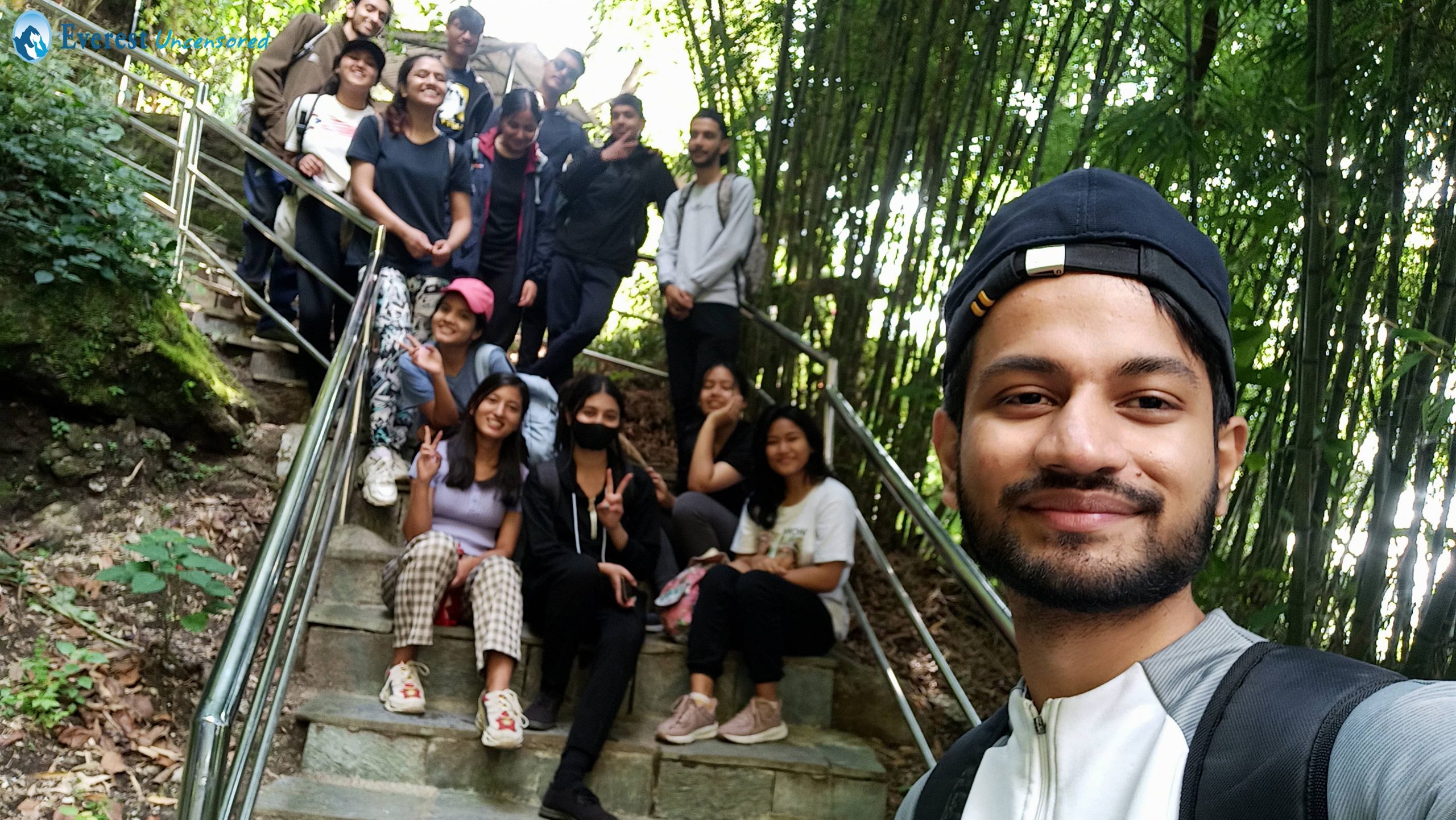 After a lot of anticipation, the day had come for the hike to Tarkeshowr temple. It was a chilly morning and the weather was looking good. Everyone started gathering at Deerwalk Complex at 6:45 AM. We left the college on the bus at 7:30 AM with a lot of excitement and traveled towards our destination for an hour. After we reached there, we searched for a place to have breakfast for about 20 mins and finally found one. At 9:35 AM, we finished our breakfast and started our journey towards the Tarkeshowr temple.

Our journey started by asking around for the way to the temple. We began to climb a steep slope which made us tired instantly. If the slope was a little bit higher, it would have been wall climbing instead of hill climbing. After climbing the hill we took a little break at 10:15 AM and resumed our hike again. As we went up, the roads started disappearing and we decided to follow any path that took us up the hill. The paths were very narrow and difficult to walk through but somehow we managed to pass through them.

After walking through a trail of narrow paths, we found a road and followed it. Then, we reached the staircase of the temple. We started climbing up the stairs and saw a sign that said it would lead us to a cave. Everyone decided to follow that road so we went there looking for a cave. On the way, we met some people and asked them about the way and they said that road would take us to a waterfall. The temple was on the way we came from. So, we had to decide to go back to the temple or go to the waterfall. After a long discussion, we decided to go to the waterfall and come back to the temple. So, we continued our journey towards the waterfall. As the roads came to an end, we reached an army barracks and the waterfall was nowhere to be seen. It was a disappointment but it was a clean and lovely place so we decided to take a break and have our snacks at 12:15 PM.

After the break, we continued our journey back to the temple. On the way, we talked to each other on different topics and met some soldiers training. After a long walk, we reached back to the stairs and we started climbing up. We had finally reached our planned destination at 1:40 PM. It was a small temple with a beautiful view. We took some photos and started our journey back down.

We took a different road on our way back down. It was a long staircase. Along the way, we saw some beautiful landscapes. At 2:30 PM, the staircase came to an end and we took a break and had some snacks. Then we started following a road back down. On the way, there were beautiful temples under construction. We had to go through a steep and narrow path that eventually lead us to the road. At 3:40 PM, the hiking came to an end and we started our road trip to Naxal. On the way, we had fun playing singing battle. After going through heavy traffic, we reached Naxal for the lunch. After a long hike, we had delicious thakali food.

We finished our lunch and said goodbyes to each other. It was an awesome experience. I got to meet many friends and seniors and every one of them was sweet. I would like to thank the hiking club for giving me this amazing opportunity.