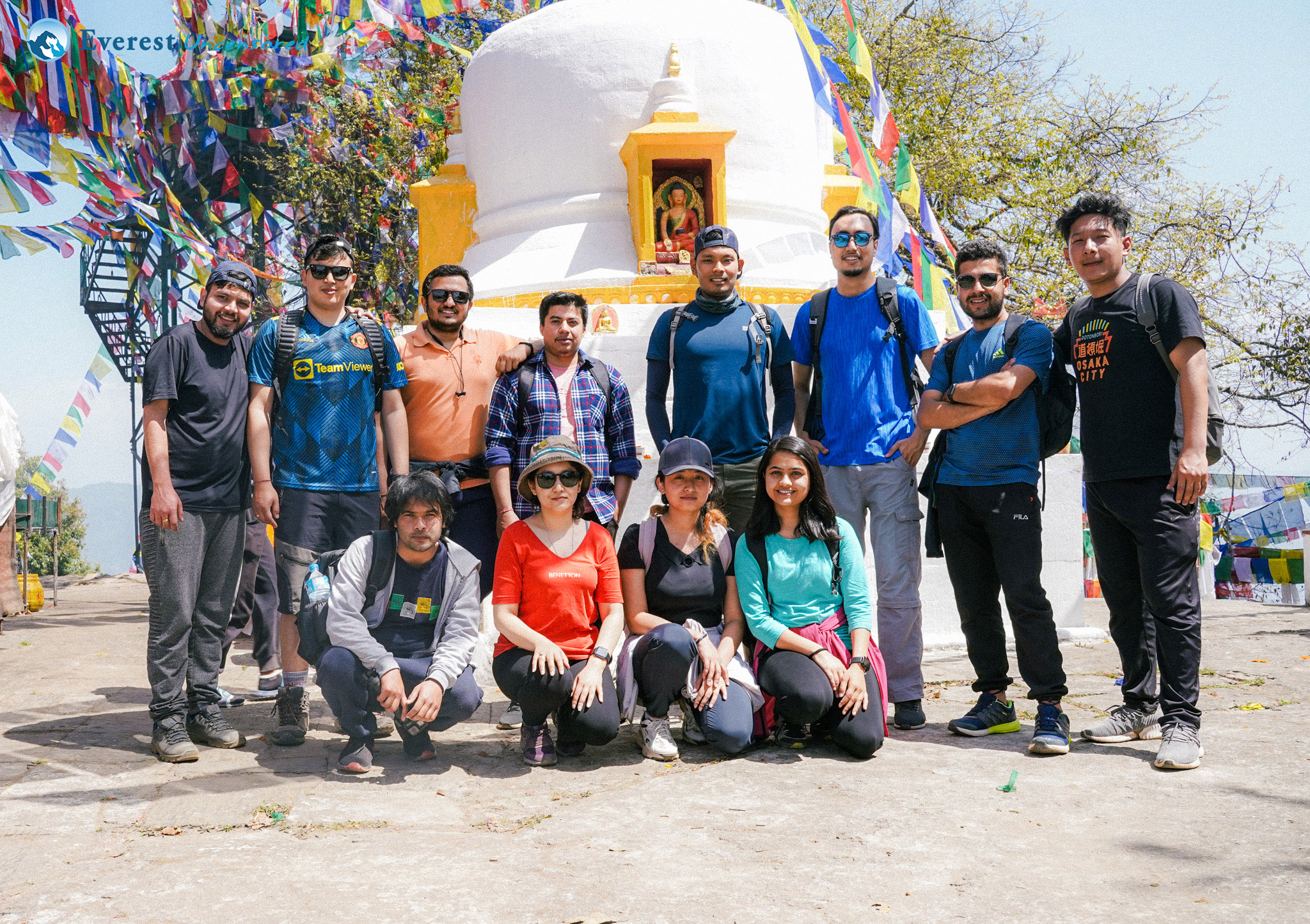 On 26th March 2022, we, employees from Deerhold Nepal went on a hike to Jamacho Gumba. The plan was to assemble at Deerwalk Complex by 7:00 AM and after having some light breakfast, we started to move towards our destination by 7:30 AM. We reached upto Fulbari gate, the entrance to Jamacho Gumba hike trail via Narayan Gopal Chowk, Gongabu and Trishuli Highway on microbus. The real hike started around quarter past Eight after we registered our name at the Fulbari Gate.

The total hike distance was around 4.3 kilometers from Fulbari Gate, which was an intense uphill climb to the destination. The weather was rather sunny. However, the shadow of the trees from the thick jungle
provided us with shade to protect us from the scorching sun. With the mixture of gentle breeze every step we walked was a bliss, it was the best time to interact with colleagues from different groups from deerhold.It felt as if we should never have reached the destination, but just to get lost in the jungle admiring mother nature and people around us.

The trail was well managed, but the shedding of the leaves, especially of the Salla(pine trees) made the trail more slippery and we had to watch each step with careful determination. While some of us wanted to take a rest after 5-7 minutes of walking, some of us wanted to run uphill more as if their core furnace had just started and wanted to roll on a streak.

We reached the peak around 11 am after a 3 hours of uphill walk. We were just in awe of what would be the view but that ‘’awe’’ became ‘’oh no!’’ after the view was blocked by the thinnest of the fog which blocked the view towards the mountain but consoled ourselves with knowing the fact that even Mt. Machhapuchhre could be seen from there in a clear sky.

We settled there to have some snacks and chocolates to recharge our energy again for the descent. While we were having snacks, we talked about office life, some personal life, some financial investments and just the feel of coming to office and meeting people after some cruel years of pandemic. The major hot topic of the day was our hike coordinator Sumit dai’s much anticipated Everest Trekking in the near future and how much he was excited and looking forward to that trek.

We climbed down back to Fulbari Gate by 2:00 pm and went to lunch. Maybe it was just food, or maybe it was just the hungry stomach, or maybe the company we had, or mix of all, the food had much flavor and it tasted much better while we joked around and had a last bite from the plate before we separated.

It was my first hike as a fulltime employee at Deerhold and overall, it was my second hike while being at Deerhold. It was so much fun and this encouraged me to hike more in the future, get to know and interact with different colleagues and learn new things from their experiences. The next day in the office after a hike was more fun and lively to me because I could see a lot of familiar faces around me. I really hope the red rhododendrons we encountered on the trail smile back at us with a hope she will see us
again!!!