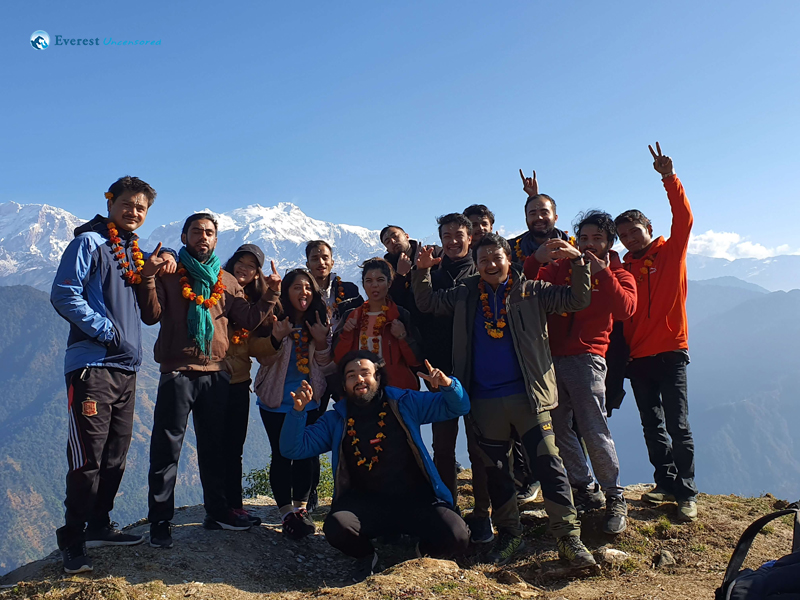 Dhiraj Dhungana
December 2019 was about to end, and everyone was excited at the prospect of welcoming the brand new year, 2020. Therefore, the Squad D of Deerwalk Inc. organized a two-day hike to bid farewell to the memorable year, 2019 and welcome the tourism year, 2020.

As the destination was finalized and announced, everyone got excited. A lot of responses kept coming in, but only the first comers got a chance. So, it was ‘Ghale Gaun,’ which brought great excitement amongst us. As the destination was much farther than the normal 2 days’ hike would have permitted, the organizers requested the participants to arrive at Deerwalk complex sharp at 6 am. On that shivering cold morning, three of my friends and I arrived in the allocated time, but there was no one else around, not even the coordinators. It was already 7:30 in the morning when we started our long journey to Lamjung.

We stopped in Dharke for breakfast and for some refreshments. Then the journey continued. It was such a chill ride: we could stop anywhere we wanted for a small tea break, sightseeing, or some photography. We reached Muglin at midday for lunch. Oh! That place was so good. It offered a great view of the Trishuli river as we sat down to have our lunch. We continued our journey to Besisahar, the main city of Lamjung. On the way, everyone on the bus was so involved in talking about the ‘Mahabharata’ that the journey seemed like a tirtha yatra.

We arrived in Besisahar at about 3 pm. We had some tea and snacks. As it was almost impossible to reach Ghale Gaun on feet, which could be a 6-hour-long walk from Besisahar. So, we took a vehicle to Kapur Gaun, which was in the middle of the way. After we reached there, we were all set for the fat-burner hike in the dusk. We were so excited to reach our destination: we moved rapidly but could not maintain the pace. Afterward, we dawdled. Along the way, we started distributing some pens and notebooks to the village kids as gifts.

Before the eerie darkness could completely engulf our vision, we reached Ghale Gaun at about 7 pm, and the coordinator managed the homestay for a night. The management was so good; so was its hospitality. The villagers welcomed us with a cup of warm black tea. Oh! It was such an energizing drink that dissolved all our exhaustion.

After we freshened up, we started a fire and gathered around. The real fun then began. While some of us were busy eating, the others were cracking jokes and laughing. Some were even singing. Suddenly, everyone huddled up in 2 teams and played a dohori battle. That was so much fun. After dinner, however, we all hit the sack.

The next morning, everyone was busy with their own chores. Some of us got early to watch the sunrise, while the lazy ones were still snoring and dreaming. It was time for breakfast after everyone had gathered around. Here, I would like to describe the breakfast because it was something you might have never had. Millet sel roti, gundruk’s gravy, and the sweet-scented black tea—it was so very delicious.
The homestay was inexpensive, and the hospitality was great. They bid us farewell by putting tika and garlands. We loitered around the village for about an hour and clicked some photos—the scene was worth seeing.

Because of the short time, we could not stay any longer. So, we traveled back to Besisahar and had our dinner. We had some interesting topics to discuss—many philosophical insights and contradictions—throughout the journey to Kathmandu. Time passed in a jiffy, and we lost ourselves amid the heady philosophical discourse.

Upama Rai
After having a delicious breakfast on one fine morning, we—a group of 15 hikers—started the 2-day hike to Ghalegaun, humming one song after another all the way. We left the office premises at around 6:30 am and hit the road to reach Beshishar. From Besisahar, we hiked uphill, from Baglung Pani to Kapurgaun to Ghalegaun. Most of the trail paths we took were normal road trail, however, some of them were shortcuts and jungle trails. Munching on some snacks, we kept our energy level high throughout.

As soon as we reached Ghalegaun, a single thought ran across our minds: it is a distant place with high altitude. It took us a long time to reach the destination, after taking many shortcuts. So, we reached late at night, and we realized that this hike might take over 2 days of time. Yet, we were glad when we made it to the destination by 7:30 pm. We rested for a while on a dusty lane and went to our homestays—the ones the committee had managed.

For registration, we were to go to the committee, which we did, and they found us our ideal homestay. To be in a group where people are being relatable and fun is always good. So happy faces were beaming with joy and calm. Cool-weather, hot water with honey, endless talks, and melodious singing kept us elated. The food was great. The hosts greeted us with much courtesy and enthusiasm. The next morning, we got up early for a walk to a View Tower that was around 3 minutes away. Watching the early sunrise and the golden rays spreading over the Annapurna and Mt. Machchaapuchhre to the Northwest was simply mesmerizing.

We were there for an hour and a half, and we didn’t feel like going away. The atmosphere was surreal, and the place was vibrant with joy. After the sunrise, we took a tour around the village where we saw the well-paved roads, beautiful traditional houses with slanting roofs, and multi-storeyed wood houses. Sadly, we had to return for breakfast. We enjoyed the typical ethnic food of the village: lemongrass tea and millet bread with gundruk.

Ghalegaun, as we experienced, was full of rich cultural diversities, with its natural beauty glorifying the beautiful mountains. While leaving, the people bid us goodbye by offering tika and garlands as well as some blessing. Not to mention, we enjoyed our time in Ghalegaun. However, we had to leave early to reach Beshishar and get back to Kathmandu.