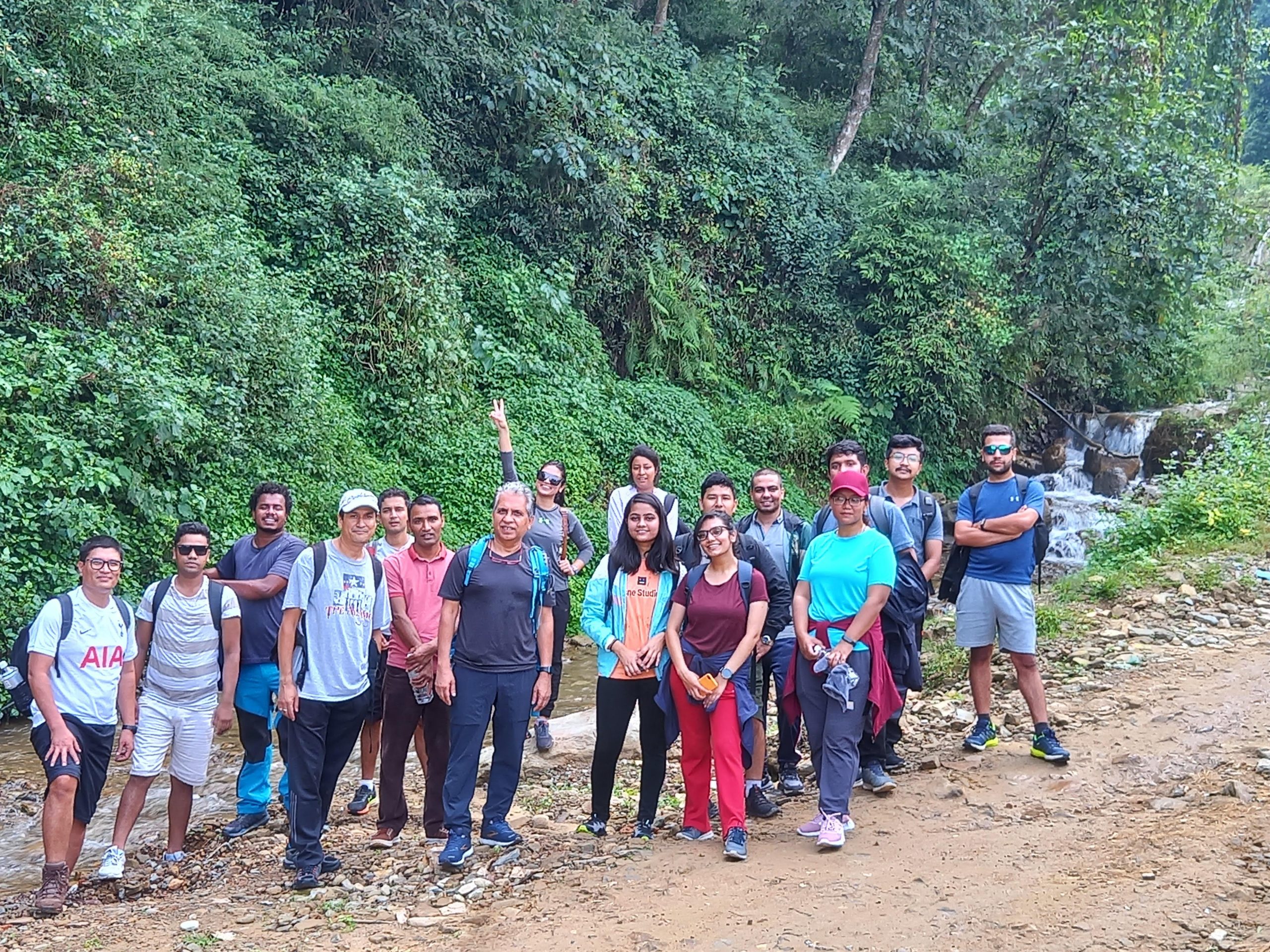 Sundays, which usually means lazy mornings with meaningless Instagram scrolls with half an eye open, the Sunday of October 24 proved to be very different. 17 Deerholders took upon the challenge to hike from Naubise to Chandragiri.

We gathered around Deerwalk Complex at 7 am and headed towards Naubise. A heavy breakfast of Anda, Chuira, Selroti and local tea served as our fuel for the day. Before starting the hike, we visited the local college, Machindra Multiple Campus, which had been under constant support from Deerwalk for providing better education opportunities to the students.

We visited the computer labs and also had a small team meeting. The college administration appreciated the effort put by Rudra Pandey and his team for supporting the college. After hearing Rudra Sir, which was just the tip of the iceberg for the outstanding vision he has for the education sector, we started our hike at 10 am.

Walking next to beautiful landscapes and hills only made me realize how disconnected we have become from nature. I was very excited about the hike as, since Covid -19, we all hadn’t enjoyed long walks and runs. A lot of us had doubts about whether we would be able to walk such a distance. But talking, laughing, and smiling we kept our heads up and hope’s high for the memories the hike would gift us.

It was so heart filling to see all the green plants dancing with nature’s breeze. The kind of scene that we crave for living between the concrete. This was a sweet treat to eyes and satisfaction to the soul. The sweet treat slowly was getting salty as our body was starting to heat up with the continuous walk. Water bottled was slowly dropping its weight but our body was already very tired.

The constant change of route was sometimes frustrating yet thrilling as we got to experience and learn “How to pave a path” for places that had no path to walk on.

Initially, the plan was to hike from Naubise to Thankot, but we were 90 percent sure that the change in the destination while hiking was bound to happen. The email that we received a day earlier said it was 4-5 hours but upon walking 3-4 hours we realized it was a “Nepali version of 4-5 hours” as we were already exhausted and short of breath but the destination was still miles away.

We climbed the steep hills more rather than walking the trails. It was Rudra Sir’s way of cutting the distance and taking a shortcut.

While we hiked, the next anticipated destination became Toplyang. We were excited and eagerly waiting for the destination as the place was unheard of and sounded kind of funny too.

On asking the locals about our anticipated destination, we saw nothing but shocked faces that would tell us “तपाईंको समूहको गति संग, अझै 6-7 घण्टा।” which translates to “With the pace and speed of you and your group, it will take 6-7 hours”. The answers were pretty innocent but came as a shock for us as we expected to hear only an hour or two away like the local dai we met down at Setidevi mandir.

Since some of us were experienced hikers and could walk faster so we slowed down and waited for the group. As we waited for the group to arrive at a certain point, we discovered slightly alarming news of our very own Sandeep dai having his leg sprained because of the long continuous walk. Upon asking him, he said he would still walk and wouldn’t give up so easily.

After continuous walking with literally no idea of which corner of the earth we were in, we were already hungry for food and energy. We were walking on the heavy breakfast we had down at Naubise and some energy bars. It was already almost 3 pm. Shekhar dai suggested we have our lunch at a local house as he had informed a local about our lunch plan.

While having lunch might sound exciting, we were hiking so high up that we had only jungle and trees around us. We were walking on the top of the hills. This meant having lunch in one of the villager’s houses we had to descend down. But hungry for food, we had no options but to walk down saying “उकालो भन्दा ओरालो गाह्रो “which means walking uphill is easier than walking downhill.

Locals had us waiting for the hot and yummy lunch down at the village. They served us with local cucumber as a snack. Our lunch was a simple Nepali lunch which included Daal, Bhaat, Saag, Achar, and local chicken. While we waited for our lunch, Ashraya Dai took out his box of pork sukuti and shared it with everyone. He said that he had come prepared as an experience from the previous hike. This small box would provide him with fuel to walk for the constant change of destination.

After having a good meal, We were a bit excited about the destination again. But the time was ticking. We had to walk faster as it would soon get darker. We were still walking the uphills and getting to the top of the hill. Due to the cloudy weather, we were refrained from seeing the beautiful scenes that nature had to offer. It felt like we were walking on clouds as the clouds moved with us.

The final destination point again changed as we decided to head to Chandragiri. Hikers still got more excited and walked out of breath with less amount of water than before.

While we all were exhausted, our injured hiker, Sandeep dai seemed to be fueled up even more with the energy drink he had on our lunch spot. He walked ahead of all of us and guided us to stay motivated and excited. Which was quite funny as it contrasted the energy he had before lunch.

Hoping we would see some scenes and get to hop onto the cable car by the end of the day, we all walked through the deserted jungle. Since it was getting darker, it was getting more difficult to look down and walk. We were slightly scared as well. We started to walk in groups and hold each other’s hands while walking. For me, this was the most epic part of the hike. We were walking on the paths that wild animals around that jungle would walk. I would constantly look back and check if any wild animals were there to attack us. We even planned what to do if such scenarios were developed. It was hilarious to think about and chilling to remember.

While we hoped we could see the Chandragiri hills, it was already dark. We even got the news of cable cars being closed soon. We were still 1 hour down from the cable car spot. Sadly, we had to cancel our plan for climbing up the hill. It was already 6:30 pm and winter evenings hinted to us that we should head to our buses soon.

Since many of us were already tired, we decided to call our vehicle up and wait for it. The dark path made it difficult to walk. The tired body refused to even talk to anyone. But the eyes were wide open and were trying to stay as close as possible to enjoy the city lights flashing.

Finally, our vehicle arrived felt like we had found some divine energy.

What started as a fun hike ended up being the most difficult, thrilling, and epic hikes of all time.  We walked 22km on a single day. Never have I ever been so thankful as well as proud of me!

We headed back to Deerwalk Complex at about 7:30 pm.