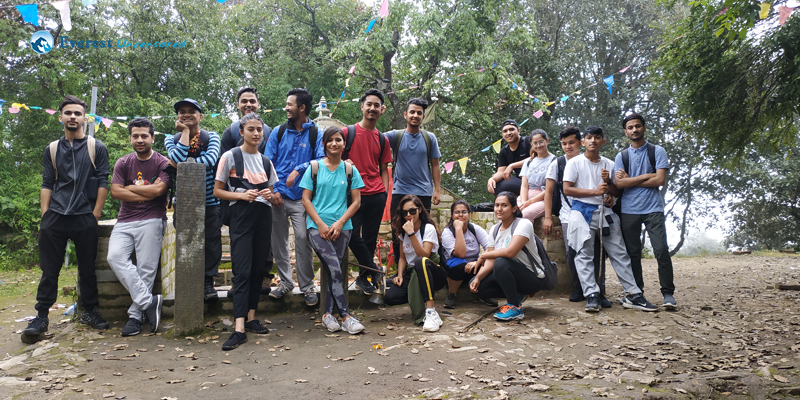 Samil Shrestha
The hikers assembled and the bus was set to move to our destination. It was a gloomy morning with a bit of drizzling rain but our spirits were never fazed by that. We set off from the DWIT Complex right at 7 in the morning. We bought some cucumbers and fruits while on the way. The bus stopped at Balkhu for a quick breakfast which was so tasty that everyone filled their guts with a lot of samosas and puris. Then everyone started getting in their hike zone and started preparing. We reached Taudaha and managed everything and were ready to start.

At first, it was a steep road upwards which was rather easier compared to the later hike. We had just started so everyone was moving fast without stopping. After a while, the harder way started. It slowly started to feel like a hike that was said to be the hardest one. Our mentor Mr. Surendra Adhikari was teaching us about different things that we saw and giving us lessons on why hiking is important. After sometime we entered the dense village into the hills and who knew what was coming up. We faced the most gruesome thing which was attack from the leeches. There were so many of them and were constantly sticking on our shoes and legs. By the time we reached the top everyone were exhausted with blood flowing from the leech bites. We worshipped at the Champadevi Temple and set our camp for eating. We had some biscuits, fruits and dry snacks carried by the club. We started eating with Surendra sir as our head chef. After eating and resting for a while we were again energized and got ready to return back. Again, the way downhill was as hard as before. We could not stop even for a second because the leeches would be sticking constantly. The girls were very loud when that happened which might have scared a lot of animals as well. We were asking the villagers and going down and down towards our final destination. Everyone knew that we were closer and closer.

Finally, we reached the bottom of the hill where the bus picked us up and we went to the hotel for lunch. We had one of the best if not the best Thakali food which washed away all the pains and tiredness filled inside us. We then sat by the lake of Taudaha where everyone talked about how exciting and tiring the hike was. We then gathered and returned back to the college. Everyone were singing and joking around. The hike was not just about walking but it also brought us all a bit closer. Nevertheless the hike was one of the best and would like to visit such places with the involvement of hiking club more and more in the near future.

Prashant Neupane
The DWIT Hiking Club conducted a one-day hike to Champadevi on 7th August 2019.The selected hikers along with our very own Surrendra sir gathered at the Deerwalk Complex at around 7:00 am. The bus then started and we started own journey.

While on our way, we bought some cucumber’s in our way which proved out to be very handy during our travel. We had our breakfast at Balkhu where we had some Samosa,puri tarkari and some jerries. We also carried some salt as a precaution against the ‘Jukas’ we were to face in our way. We then reached Taudaha lake where our hike began. We started the journey along the trails of Champadevi but as the route was too ‘mainstream’ we took the way through the forest of the hills. We climbed through the forest relatively in a fast manner as we were all facing the problem due to ‘Juka’. Some of the hikers were even yelling as if they were watching a horror movie. We also met a dog at the very beginning of the route which was with us along the whole journey. After a while we reconnected with the trail and had some rest along with some light lunch. We also had to use the first aid kit we brought along to heal the wounds caused by the ‘Juka’. After some rest we resumed our journey, along the way some of us also ran to the top. Shiva Tripathi who had already been there was the first one to get to the top.

After reaching the top we worshiped the statue and also had our lunch nearby, as most of the water we brought had finished, the cucumber proved to be very handy. Surendra sir cut the cucumbers into pieces and also made a chili paste from the chilies that we had brought along. After that we were in a dilemma whether to go back the same route or to take the other route which none of us were familiar to. We slowly walked our way to the bottom; the road was too slippery. We couldn’t find a way in the between but still decided to walk for 10 mins and if we didn’t find a way, we would return the same way back. After nearly 5 mins of walk, we found a road that looked like it was the way. We then walked along the road which was totally destructed by the landslide, we walked through the obstacles which proved to be difficult for some of us. We then reached a village and asked where the road was. The villagers informed us that after 20 minutes we would reach the main road and Pharping then would be just 3KM away. We then reached the road and called for the bus. We then stopped at Taudha lake where we had our delicious lunch, by far the best food we had in our hiking moments. We also walked along the lake and fed the fishes with some foods. After walking alongside the river, we then got into our bus and retuned to Deerwalk complex at around 6:30 in the evening.