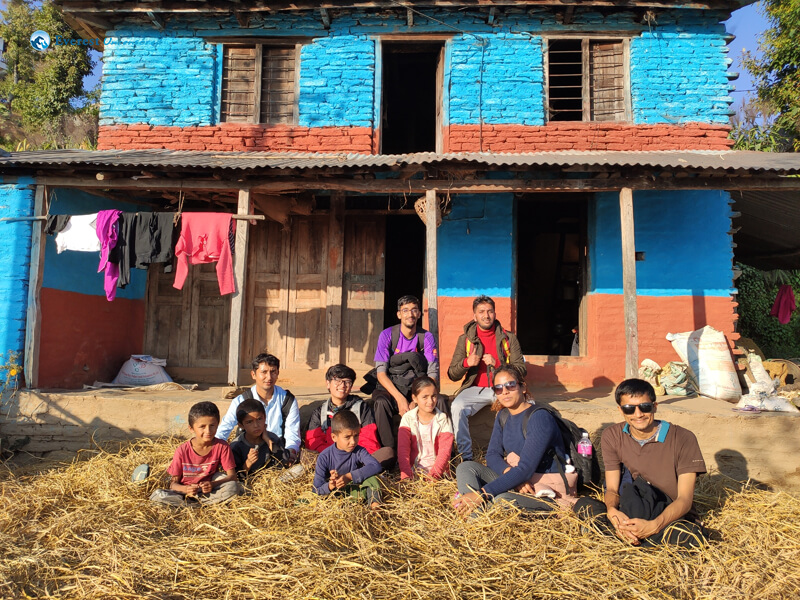 Rishav Jain
The first question that comes to our mind when we hear ‘Australian Base Camp’ is if the camp’s in Australia. Pfff no, it’s in Nepal!

We started early at around 6 am from Kathmandu, had breakfast in Malekhu, and reached the outskirts of Pokhara by 12 noon before we were stopped by the Armed Police Force (APF). We were told that due to the local elections the traffic will be allowed to pass only after 5 pm. Right at that moment, we all thought that our trip had already ended. But kaboom! the small vehicles were being escorted by the police every hour and two, and we were thus eligible. We had some snacks packed on the stop and ate them along the way. On our way to Sarangkot from Pokhara, we gave a lift to the two Dutch—Nick and Marielle. They also had the same destination, so they became our partners in hike. We reached Sarangkot by 1 pm, and after some quick refreshments, we started the hike. It took us 2-3 hrs to reach Kande and then the next 2-3 hours to reach the Australian Base Camp. The view was spectacular all along the way.

We had our bookings in Angels Guest House. And after reaching the place, we all got together to have a good dinner. After dinner, we made a bonfire and started singing and dancing and having fun like there’s no tomorrow. The place was so lit that it had the power to make all of your worries go away. The mountains were so great that they made you feel how tiny your worldly problems were. The sky was so clear that you could point out every constellation mankind has ever known about. The air was so pure that you could feel the infinite energy it gave you. The night ended well.

The next morning, we all woke up early to watch the Himalayan Range and the sunrise. We had an incredible view of Annapurna South (7219m), Hiunchuli (6440m), Machhapuchhre (6993m) and Lamjung Himal (6983m). We took some group photos and left the base camp at around 9 am. We hiked from the base camp to Dhampus and then to Phedi, which took us approximately 4 hrs. The Deerwalk vehicle picked us up and then we started our journey back to Kathmandu before stopping in Pokhara for our lunch. We roamed around a bit in the Lakeside after lunch before we headed back. We reached Kathmandu at around 9 pm and “Voila!” our unforgettable journey had finally come to an end.

You might have wondered how the Australian Base Camp got its name. It is said that during the late 80s, people from Austria found it so beautiful, they used to come and camp there for several days as it is so peaceful and pristine, offering a mesmerizing view of the mountains. Since then people started to call it an Austrian camp, and as it was difficult to pronounce “Austrian” for the locals, it soon became known as Australian camp.

Cheers to Ruby and Shreyansh for coordinating the hike pretty well and also shout out to Santosh Devbhandari Dai for leading us all along.Thanks to Rakshya for sharing the info on why the Australian Base Camp is called so.Thanks to millions of years and the tectonic plates in Nepal and Tibet for colliding and giving us such marvelous mountains. We will forever be grateful for their beauty.

Anup Shakya
A two-day hike is already an enticing prospect, but when the hiking destination is a place such as the Australian Camp, I immediately felt this: The mountains are calling me and I must go. The hike started just as any hike would: with a delay of one hour. We had a long journey ahead and had planned to start at 5 a.m. from Deerwalk Complex, but we could only make it at 6. This was just a precursor of the chaos that would take place later in the day. After we picked up all the hikers, we headed out of the valley in the fresh morning air. We reached Malekhu at 9, where we stopped for breakfast and freshened up.

The journey was going smooth until we reached Kotre at mid-day, where we came to know that the roadway from Tanahun to Kaski was blocked till 5 in the evening due to the ongoing election that day. There was an immediate frown in everybody’s face, but still, we decided to utilize this time to take our meal. As the meal arrived, there was an announcement of the police escort which would take us to Kaski. And we were left in turmoil whether to eat the meal or leave, so we packed all the food and had our lunch in the vehicle. We also picked up two Dutch hitchhikers, Nick and Marielle, who were left stranded due to the election day. Little did we know that we would later become hike buddies. We finally reached Sarangkot (Pokhara) at 1:30 p.m. and started the hike from Kaskikot at 1:50 p.m. We were very excited to reach the destination and walked with a big smile on our faces. We distributed the Deerwalk notebooks and pencils to kids we met on the road. Even such a small action spreads happiness, and that small act of love spent on one will definitely become two.

With this sense of pride, we headed to the Australian Camp. Very unfortunately and embarrassingly, I sprained my ankle while walking on a plain black-topped road. Walking became quite difficult since my ankle started swelling. But then I realized: Life is not always rainbows and butterflies, sometimes it’s a sprained ankle and a 9-mile hike. So, with assistance from my hike buddies, I carried on but had to cut the hike short due to intense ankle swelling. Huffing and puffing, we made our ascend to Australian Camp, and as we got higher, the mountains got nearer, much wider and more elegant. I was lucky to reach the top at around 5 p.m. which synced with the sunset that day. The golden-red mountain at sunset right in front of my eyes was one of the most spectacular views I’ve ever beheld. I don’t think any words, photos, or vlogs can do any justice to that moment. You just have to be there and experience it for yourself.

All the other hikers, who took the long route made it to the top at about 6:30 p.m., and it was already dark by then. We freshened up and gathered at the kitchen at 8 for supper. We got back the much-needed dal-bhat power and then gathered around the campfire for some fun time together. We started singing songs and just enjoying each other’s company gazing at the sky—clearest we have ever seen with thousands of stars and a clear view of the constellations (Orion being the most distinct and charming). We even enjoyed the shivering cold mountain breeze. We had to prepare ourselves for the long walk the next day, and each one of us had their own strategy for killing fatigue. For me, having a sore ankle made everything apprehensive.

The next morning, we were greeted by the glorious sunrise, which I missed by oversleeping for 17 minutes. Still, the morning view of Mt. Machhapuchhre and Ganesh Himal was stunning. We then had our breakfast, after which we quickly had to start the Day 2 hike, which was a 3-hour downhill to Phedi. The descent was even more difficult—at least for me. We managed to reach the destination at about 12 p.m. and then headed to Pokhara for lunch. We took a tour around Phewa Lake, and at 2 p.m. we decided to end this memorable hike and started our journey back to Kathmandu.

I would like to express my deepest gratitude to our coordinators Ruby and Shreyansh for organizing this epic hike, and Shyam Dai for his unprecedented driving skills—nonchalance, and a good heart. Nothing worked as planned, but then if everything did, where would be the fun in that? Nothing was normal about this hike, and maybe that’s why the hike was special. We live for the thrill of uncertainty in life—that’s how we roll. Hami khatrai ta ho ni bro, sadhai khatrai nai huni ho.