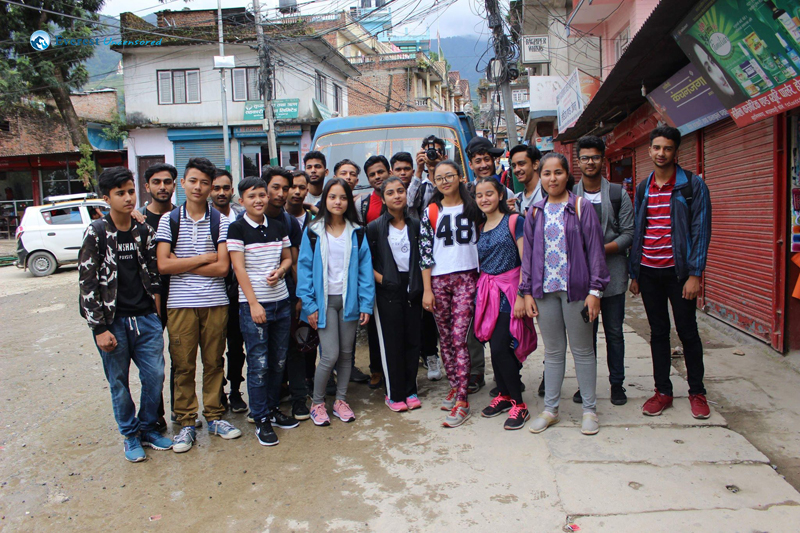 Prayusha Acharya As scheduled in the school calendar, a hike to Shivapuri Peak was organized for the students of Grade XI on Saturday, 22nd September, 2018. It was our first ever hike from the Deerwalk Sifal School which everyone was excited for. We were informed to be at school at sharp 7:30 am. Almost everyone was there on time. Some arrangements needed to be made, so we were not able to depart immediately. We left the school premises in a bus at about 8:30 am with 21 students and 6 teachers. Singing and getting excited all the way, we reached Budhanilkantha, the starting point of our hike.

Competing for who would reach first, we started our hike from Budhanilkantha and but it didn’t last long. We were already tired by the time we reached at the gate of Shivapuri National Park. We waited there for about 10 minutes for tickets arrangement, clicking photos in the waterfall and getting ready for the great hike ahead of us.

We continued our hike to Nagi Gumba, observing the great view of nature around us. People with similar walking strength were automatically teamed up. The weather too was in our favor that day as it was neither sunny nor raining.We clicked many photos in the green environment while proceeding towards our first destination. Reaching the monastery at around 11:30, we rested in the green grass and Chautara eating the snacks we brought and reviving our energies. Clicking some group photos and seeing the monkeys hanging around, we felt peace in that environment.

We continued our hike towards Shivapuri Peak from Nagi Gumba through jungles and the path covered with fallen leaves. We saw wild mushrooms, leeches, huge sized earthworms, and many unfamiliar plants and insects. Breathing in fresh air, pretending to hear tiger roars, we continued our journey. Feeling restless, tired, yet having fun, we reached our destination: Shivapuri peak which is at an altitude of 2732m.
Teachers were waiting for us at the top to guide us another way back to the base of Shivapuri National Park. Drinking water and taking some rest, we started to walk again from the top to downwards. We finally reached the gate of the National Park at around 6pm, all feeling extremely tired, starving and thirsty. We got to the bus after walking downwards for 30 minutes. We had a great meal after a long wait on our way back to school. It was almost 8 when we reached home.

Although the journey was very long and tiresome, it gave us a great experience and a memory for a lifetime.

Bibek Dangal Deerwalk Sifal School (DSS) organized a one day hike to Shivapuri Peak on 22nd September, 2018. The hike was organized by DSS Hiking Club for grade XI. All the participants were informed to gather at 7:30 am at Deerwalk Complex. We started our trip at 8:30 am from DSS by bus. We reached Budhanilkantha around 9:00 am and bought some snacks to eat while hiking.

We started our hike at about 9:30 am with energetic steps upto the entry gate of Shivapuri National Park. Our teacher managed the tickets to enter the National Park and we entered the gate at about 10:30 am. The scene that we saw inside the Park was precious, greenery and a blow of fresh air made us happy and excited. The land was wet and a bit slippery due to the thick forest. The brown leaves which fell from the trees were all over the way, it seemed like the path had worn the cloth of the brown leaves. It was really good to see the straight, yellowish red beam of sun light entering through the small gaps of trees.

After about two and half hours of hike we reached Nagi Gumba. It was a beautiful monastery, which was the home of many monks. Monks seemed to love their monastery very much as we saw the monastery very clean and beautiful. We took a short rest there and had our snacks which we had bought from Budhanilkantha. After rest of half an hour, we started our hike through stairs which was the way to the Shivapuri Peak.

After a difficult walk, we reached to BhaagDhara, a place where taps were designed in the shape of head of tiger. There was a pond which was filled with cold water. The water there made our hand numb. We released some stress by feeling the cold and fresh water. Then, we started our journey and after an hour, we reached Deurali. It was one of the beautiful places on the way to Shivapuri peak. We asked some workers about the way and we came to know that we still had a long journey to reach to the Peak.

We reached the peak after 2 hours but some friends were left far behind. We saw a white statue of Shivapuri Baba, who meditated there. And it started to rain when we reached the peak. After sometime the rain stopped and we decided to return back by other path but many friends were left far behind. It was not so difficult to return back as it was while climbing the steps before. We returned to the same gate of Shivapuri National Park where we had started in the morning. We had a delicious meal after a long hike. Singing and enjoying, we returned back to the school.

Overall, it was a thrilling experience of a hike. Our legs were paining but the beauty of the National Park made us forget all our pain.

186 thoughts on “Hike to Nagi Gumba and Shivapuri Peak”