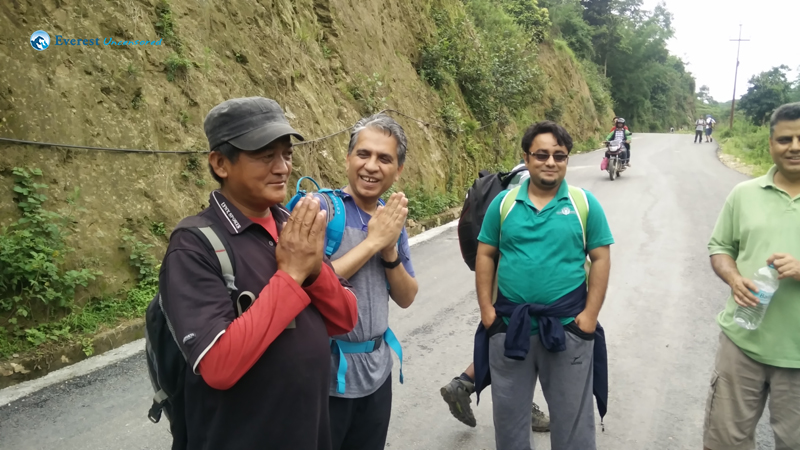 It was one fine morning when I had packed my camera kit and my backpack for a whole day of hike with Rudra dai and team. There was quite some excitement building up in me as I was waiting for the Deerwalk shuttle to pick me up.

As soon as I got in, it was a really cheerful vibe that came off of all the participants. Pramod dai offered me a gum and I kept the singing ritual going. Every participant went on to sing some song when in the vehicle, and Ganesh dai stole the show with his Narayan Gopal piece.

After having picked up everyone, we set off to Banepa to satiate the morning hunger. We found an okay looking breakfast place at Banepa at around 8:15 and had some Samosa, water and Jeri. With our tummies happy, we set off to reach a point at Dhulikhel from where the hike was fated to begin. The point was right around Himalayan Horizon resort.

We had some extemporaneous sessions of Hamro Party talks and politics. The happy and helpful nature of people that we met was really heart warming. We had some intense talks about how development can be attained in the rural areas as well as the ‘developed’ areas in Nepal. The agendas of the party, the manifesto and the roadmap, meticulously scrutinized upon and refined.

The way from there passed through some villages and houses. We followed the yellow Nagarkot sign boards on our way, and encountered some beautiful pastures and treelines along our way. Slipping a little bit and walking on, we went on a perilous road up until we reached Chandeshwori temple and followed the larger road from there until a place around Devitar from where the mystifying scenery of Panchkhal valley and Ravi-Opi hills stole our hearts.

The road that followed was quite steep and had us conquer the unrelenting slopes, the fruit of which was great, the views at every steps was breathtaking and so were the conversations among the team. When I challenged Rudra dai and Gokul dai regarding the motto of the company, ‘Result. Reflect. Repeat.’, they came up with a solid justification of how that is the best motto to follow and how the motto incorporates all the pathways to success. The team was totally sold to the idea behind the motto. Personally, I was quite happy to have brought this into one of our several conversations and having come out with a wholly convincing justification despite of the decent amount of physical strain I was in.

After the arduous upwards hiking, a long roadside walk followed. Roads never seemed longer, as we walked on the motorway. The motorway walk was quite lengthy, and in order to encourage Ganesh dai to reach the finish line where our vehicle lied, I made a 100 meter dash to the vehicle. Happy to see the vehicle waiting, Ganesh dai finished shortly after as well.

The best part of the whole hiking was when we reached the Berg hotel, where we were served one of the most sumptuous meal that I had had in the recent times. We soaked our parched throats with glasses of beer among other refreshments. I almost threw my hands in the air when the rain poured for the first time that day, right after we held the beverages in our hand under the shade of the Berg. That rain would have totally ruined the whole hike for me. I was ecstatic about the fact that we found a day with the most wonderful weather that was not too sunny and not at all rainy either.

At the Berg, the scene was totally lit up with beautiful minds coming together and discussing lots of issues including emigration, acadmic standards, politics, and the corporate culture. An entirely enlightening trip for me as I rested my face on my palm and listened to the waves of ideas in a pool of various mindsets.

We ended the trip on a low note as everyone was quite exhausted after the day-long endeavour. This trip is going to stay on my mind for quite a long time, that I’m certain of.

6 thoughts on “Hike to Nagarkot”