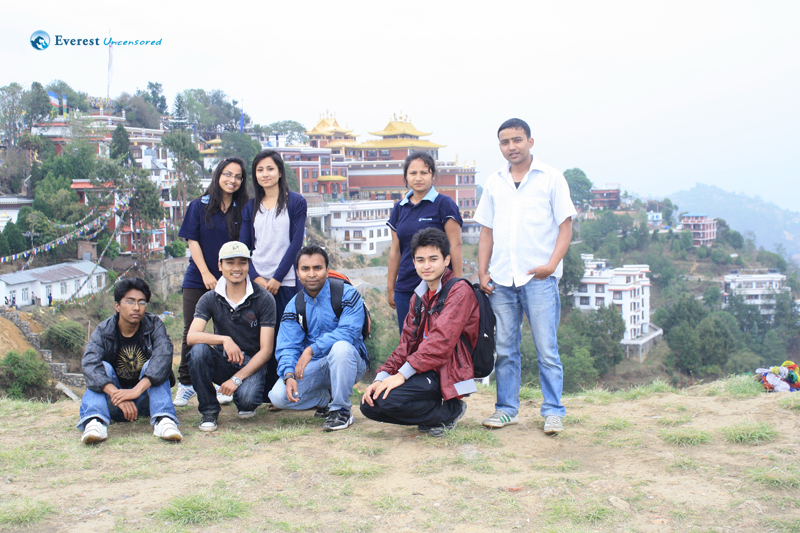 Reshu Sedhain
One fine Sunday morning, some Deerwalkers were still in their bed. They were reluctant to get off the bed early, as there were some unconfirmed rumors of bandh (shutdown) in the capital. When the hands of clock struck eight, all of a sudden my cell phone buzzed. It was a call to join a hike. “Hey! Where are you? We are heading out for a hike. You want to join? “, the voice on the other end said. It was too good an offer to pass!

Everyone packed up their bags – overjoyed and excited at the prospect of visiting Namobuddha, one of the famous Buddhist monasteries near Kathmandu. So the prospective hikers assembled at the office premises at 9:00AM sharp for the impromptu expedition. After a short halt at Koteshwor to pick up some of the other hikers, we proceeded towards Banepa. We all were hungry, so everyone was waiting for the next stop to have some breakfast. It was 10:15 AM when we reached Banepa. We had our breakfast at a small hotel named Banepa Hotel. Without any further delay, we were on our way to Panauti and arrived there at 11:00AM.

Namobuddha–Dhulikhel trek takes about two hours for a normal hiker. Apparently, the time depends on the pace of your walk. We navigated through villages such as Banepa and Panauti before stepping at the serene Buddhist monastery – Namobuddha – one of the sacred and important destinations for Buddhists.

It took us an hour to reach the Stupa. As soon as we reached the Stupa, it started raining as if Lord Buddha himself was sprinkling holy water to welcome us – the worn-out hikers .The drizzle did nothing to dampen our excitement. We took a glimpse of a stone sculpture that depicted Buddha himself feeding a hungry tigress and her cubs. It is believed that the place is where Buddha gave up his body.

An anecdote goes – Mahasattva was one of Buddha’s previous incarnations. He was the youngest of the three sons of king Maharatha. Once while the three brothers were walking through a dense forest, they saw a tigress which had just given birth to five cubs. Feeble and hungry, the tigress could hardly move. The three princes ran away. But, Mahasattva decided go back and offer his body to the hungry tigress. He started chopping down his flesh to feed the tigress. When his brothers went back looking for him later, they found only his bones and hair as remains. The Stupa was erected on top of those remains.

Following the ridge to another summit on the same hill, there is another small Stupa which is said to be the spot of the den of the tigress. There, we saw pilgrims lying down on the ground as if offering their bodies to the place. Pieces of cloth hung on the branches of the tree for protection. It was such a beautiful place to be.

Heavy rainfall cut short our stay at the magical place. We called Ram, who quickly showed up with the van to pick us up and drive us to Dhulikhel. On our way to Dhulikhel, we had tea and noodles soup – a real delight, as it was cold outside due to rain. Also, we had some aiselu (a kind of fruit) bought from a small child in a village on our way to Dhulikhel.

We had our lunch at Dhulikhel hotel. As it was just 4:00 PM, we decided to visit Kali temple – also known as “thousand stairs temple”. We walked for about fifteen minutes from the hotel and climbed the thousand stairs to reach the temple. The scenic view from the temple was simply awe-inspiring. The relatively easy but nonetheless soothing hike had finally come to an end.

We headed towards Kathmandu at 6:30PM. Thanks to Ram for driving us home safely and thanks also to all the team members for making this hike an incredibly memorable one.

Rajendra Prasad Gyawali
It was a beautiful day for a hike. Gentle rain certainly helped us cool down. Instant jokes by Roshan and Santosh were entertaining us all along the way. The views from the top of Namobuddha and Dhulikhel height were simply awesome. I found Namobuddha a peaceful place with Buddhist monks praying. It is such a beautiful place to visit, indeed.

Roshan Ghimire
Namobuddha means ‘Greetings to the Buddha’. It was exciting and probably the most important hike for me since I was the organizer of the hike for the first time. I had a great time with my colleagues. The best part of the hike for me was that I attended the Buddhist Prayer in the Gumba with the monks for the first time in my life, which gave me relaxation from the tiredness of walking. It is said that by the grace of Lord Buddha all the bad deeds of people are washed away if they visit this place.

Sajjan Shrestha
For me it was a fun and gratifying hike. Fun because I got the chance to know my coworkers better and gratifying because it was not a very tough hike. I also got the opportunity to take photographs of our hike, which helped me improve my photography skills. In summary, the hike to Namobuddha was outstanding.

0 thoughts on “Hiking from Panauti to Namo Buddha”