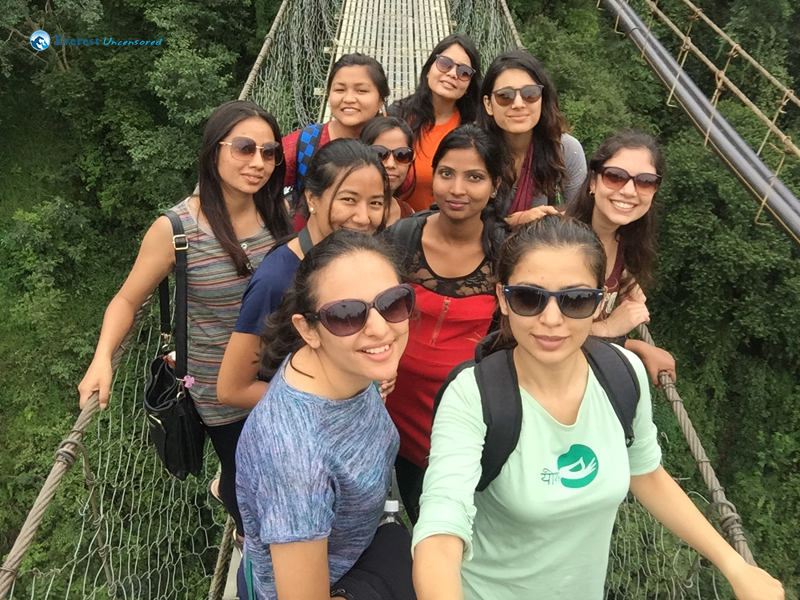 Balthali was chosen as our hike destination for its proximity to Kathmandu, ease of hike and relatively conserved natural state. It did not disappoint.

A quick drive from Deerwalk Complex to Khopasi village center was pretty uneventful thanks to our trusty Purna dai behind the wheel. Once at Khopasi, we stopped for some tea while waiting for our tour guide…..who never arrived. So, the group decided to travel on our own but not without some precautionary measures for leech i.e. purchasing a few bottles of Sancho and dousing any exposed skin in it. Luckily, the weather gods were on our side and we had some good sun and no rain–we took this as a good sign for our hike. A brisk walk from the old village of Khopasi brought us to a suspension bridge where the fun began. After taking about a 100 pictures and selfies at the bridge alone, the hikers began the upward trail to Balthali Village Resort. The trail however wasn’t upward for long as it flattened out for a bit (more reasons to take photos, this time mid-air shots since it was flat) and spiraled down swiftly to another suspension bridge that connected to the next hill. Never to miss a good spot for photo taking, the group stopped again for another bunch of pictures. The river below was super tempting for a quick dip as we had gotten sweaty after hiking so far but knew better than to take the of risk going into rivers during the monsoon season so we talked ourselves out of it and hiked on upwards again. At the top of the second hill was Balthali village itself. We met some friendly locals who gave us directions to the resort and passed by local homes that were destroyed by the earthquake. While that was a sad sight, we hoped that us traveling as internal tourists would in a small way contribute to reviving of the post-earthquake economy and rebuilding of the community there. A steep climb of 10 minutes from the village center and we were on top of the hill where the resort was situated. Sweat-drenched and hungry, we were welcomed with cold, fresh pineapple juice which we gratefully gulped down while taking in the breathtaking view that we had worked so hard for. Luscious green hills dotted with small huts and rolling fields of rice and maize was a sight to behold. While the mid-day sun was at its peak, the soft breeze cooled us down as we relaxed in the resort lounge catching up on each other’s experiences of the hike thus far. Local lunch was served on another part of the hill which we quickly devoured overlooking a range of never ending emerald hills.

After lunch, it was on to the swing sets for some play, singing and more picture taking. The plateau of rice-terraced fields peppered with maize plantations, small green forests, tiny streams, a gushing river and glimpse of the Himalayan range made sense why Balthali is considered one of the best, low altitude hikes in the world. The initial plan was to hike/drive to Namo Buddha after lunch but b/c of time constraints, we decided to make a pit stop at Sanga Mahadev enroute to Kathmandu to instead. This change of plans meant we had more time at hand to chill at Balthali. We decided to introduce Emily to Kabbadi and played a couple of rounds following Kanchan’s made-up rules which resulted in roaring laughter after each round. As a special memory for her time in Nepal, the land of Hindu gods and goddesses, the group posed for a goddess pic w/Emily infront and 8 hands behind her which came out really pretty. Nizu gets a special shout out for being a patient photog, choreographing and clicking away at everyone’s request. The trail back down was relatively quick and easy. We got into the office van and headed straight to Sanga. Everyone had already started gasping at the varieties of titaura in the myriad of tiny stores on our way up to the temple so I knew we were going to be spending quite a lot of time on our way back in one of these stalls. See attached pics for the accuracy of my prediction. Sanga Mahadev, the tallest statue of Lord Shiva in the world was truly awe-inspiring. Priti bought a bunch of coins and handed it over to all of us to throw it into the little triangles etched in the stone wall behind the statue. According to a local, getting the coin to stay in the triangle meant wishes came true. Regardless of whether the folkore was true or not, we all gave it a shot and most of us actually got the coins into the little triangles! On our way back, some of us stopped for sampling titaura, one sample led to another, and one purchase led to another and before we knew it, all the hikers were gathered around the tiny stall devouring titauras like nobody’s business. Deerwalk hikers probably made that stall owner’s day and when we left, they waved us goodbye with large smiles and told us to come back again.

The closer we got to Kathmandu, the more prominent the concrete jungle became and the fainter the greenery we had left behind. Ah, at least the memories remain, until next time!

While the Saturday morning rain delayed some hikers from our early morning start, starting later turned out to be advantageous, for it rained as we picked up all the hikers on the way to Khopasi, but the weather was clear as we hiked.
Following morning tea and trepidations about encounters with leeches, we set out from Khopasi around mid-day. Luckily the weather held clear, and we were spared any attack from leeches.

Our first suspension bridge crossing took nearly thrice as long as expected, merely because we had so much fun running back and forth and snapping photos. Indeed the suspension bridges were a high point, offering stunning views- from rolling rivers to lush layered rice fields. The clear weather combined with wide forested paths and shaded groves allowed for many photo opportunities and it seemed we spent just as much time taking pictures as we did hiking! But no number of photos can capture the tranquil, serene air that I had been missing in Kathmandu.

After a short but steep uphill hike to Balthali, we happily collapsed into awaiting chairs, where we restored our energy with a light lunch. Much of the afternoon was spent relaxing and talking on the heights, surrounded by curving green valleys and hills. Well-rested after endless photo shoots and a thrilling game of kabaddi, we headed back down the hilltop. It was still early by the time we left Balthali, so we stopped at Sanga to see the tallest Shiva statue in the world and enjoyed some ice cream in the evening light. Overall it was a perfect way to spend my last Saturday in Nepal, surrounded by natural beauty, fun, and good company 🙂

Special thanks to Nizu for organizing a wonderful hike!

Outing always brings smile to my face, a day out with no work load, no pressure and all about enjoying the day and nothing else to think about what more could you ask for. Well, on top of that a day out with the colleagues with whom I have been working with day in day out, having feeling same as me couldn’t be better. We had been planning this trip for almost a week and when that day finally arrived, all of us couldn’t get rid of that smile from our face.

We first arrived at office early morning to ensure everything is going according to plan and all preparations were made. After short do’s and don’ts we quickly moved towards our destination Balthali. All of my colleagues were super excited to get this day started and have fun from very beginning. Since Balthali laid just beyond the outskirts of Kathmandu valley it dint take us that long to get there and start our hiking.

Everyone loved the idea of hiking and were really enjoying from the very first step. During hiking, we were mesmerized by the beauty and view of the flourishing fresh greenery that Balthali has to offer, probably one of the best I have to say. The freshness of the area bought calmness onto us, making us forget our busy daily lives. Along the way we took many photographs of ourselves along with the greenery we saw.

Although it was a short trip with my colleagues, it was a great team bonding experience and something I will cherish in my life. ‘Off the beaten location’ like this full with ethnic tribes and natural beauty will not only give a peace of mind but also life time memories. Though I am back in hustle and bustle of Kathmandu Balthali is all still there in my heart and soul. The walk, the hills, the sky, the solitary and pleasure.

2 thoughts on “Hike to Balthali”