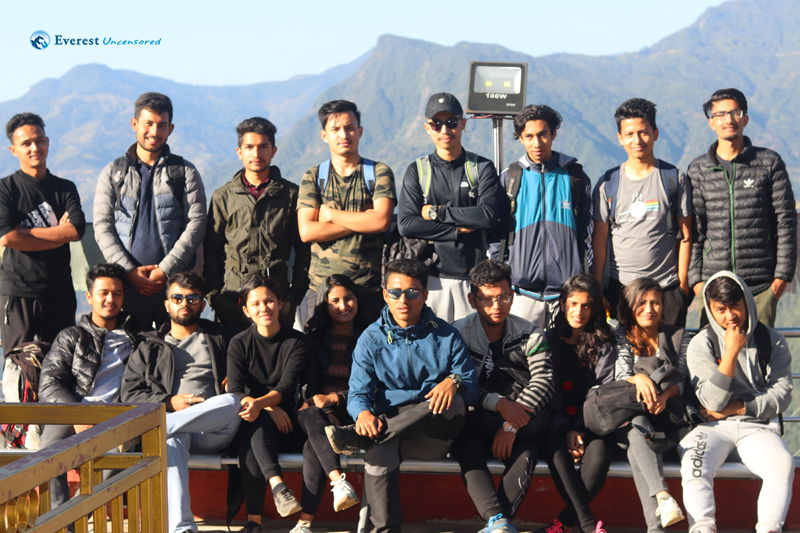 Ajay Banstola On Nov 3rd,2018, we were all set for the two days hike in which total of 18 members participated. Our meet point was at Deerwalk College, where we all gathered and headed towards the destination at about 6:45 am. Through the bumpy and curved roads of Sakhu, we had our breakfast at Jharsing pauwa at about 8:30 am. The smell of grass, soil, air like everything was much fresher than the capital. Then we headed towards Melamchi. We did have a lot fun in the bus. Singing, dancing, playing cards (for fun) and what not?

We reached Melamchi at 11:00 am. We all had our self-made fishing hook. But later, we decided that using fishing net was much efficient. After that was refreshing swimming in the river. It was a soulful experience to those who had never swum before. We even grilled fish there. But we had to reach the Resort soon so we headed and reached the Resort at 4 o’clock. Then we hiked for the Dam side after having lunch at the Resort. Unfortunately we couldn’t enter there due to various security reasons. We returned to the Resort, had Barbecue and fish made up after the Dinner. We then played Antakshari for a while and then decided to go back to bed because we had a grueling schedule the day after

With a blink of an eye it was already 6 in the morning. We then got ready for the almost 7 hours hike towards the Shermathang. It was an uphill hike and was really tiresome. But then again it was fun too. The beauty of Himalayan range and hills with a ray of morning light reflecting back in the way was beyond imagination. We had to return to the Resort at 1 o’clock because we had to reach Kathmandu as soon as possible. So, we returned though we could not reach the destination. We headed towards Kathmandu after having lunch. Everybody was tired so we rested through the journey to Kathmandu in the bus. Later at about 7:00 pm we reached Kathmandu and had our dinner there. Everybody then departed for their home. It was a lifetime experience to have such hike in my life and I encourage everyone to participate in such activities.

Nabina Khadka Up and down the road, Helambu hike was the second two days hike I had attended. Unlike Chitlang hike, there were less familiar voices for me. I had not expected much from the hike but wasn’t disappointed. I had a great weekend.

We left Deerwalk Premises at around 7 in the morning. Singing, dancing and playing cards on the way to JarsinPauwa made it less difficult for the bumpy road travel. After having a quick breakfast at Jarsinpauwa, we went fishing to the nearby pond and later went swimming in the nearby river. The water at zero degrees Celsius was welcomed by grilled fishes and lots of joy. After about an hour or two, we left for Helambu. The journey was full of dirt and bumps. After an hour, we were welcomed by a beautiful Khaja set at Helambu. Helambu served us well: a resort in the lap of mountains and a river flowing next to it, cold breeze and a wide sky with stars shining on our top. The beauty is beyond words.

The same day we went to Melamchi Dam Side. Though we couldn’t enter the dam, we had a chance to look closely at the project and the work around it. Later that night, we sat around our resort and had a barbeque session with songs, dance, and laughter.

Next morning was a hike day to nearby Gumba. 3 hours of straight upwards hill wouldn’t have been easier if it wasn’t for the beautiful sunrise and fresh air. After the climb was over, we all came back to resort and had some time in the down by river. Next, we had some lunch and left for K-Town.