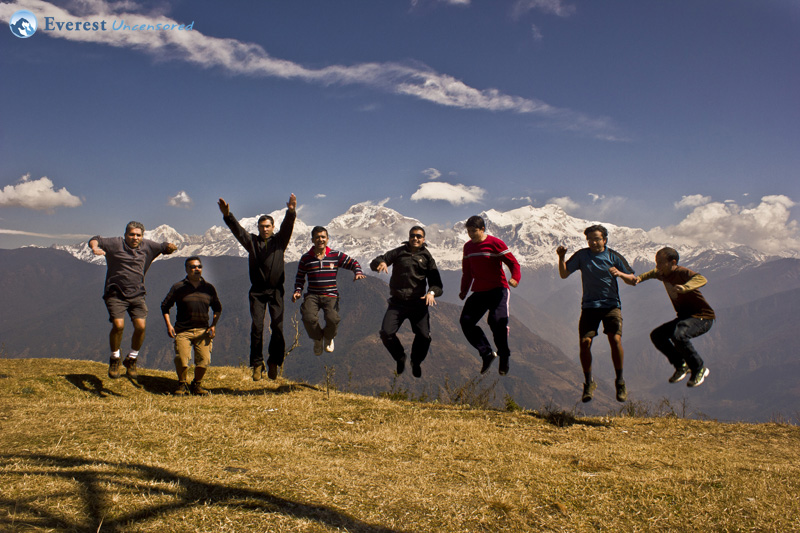 Taking advantage of the long weekend we embarked on this particular hike to Ghale Gaon last Saturday at about 8 am. The destination for the van was Lamjung’s headquarters Besisahar. As the road wound gently around the hills Lava Kafle started telling stories from the past to entertain the hikers. Rudra Pandey kept interjecting with his ‘divide by’ comments at almost all Lava’s stories. For instance, Lava said that he used to have lunch with Dhirendra’s (Late King Birendra’s Brother) daughters and Rudra would say ‘divide by 16’. Again, Lava said that Bhanubhakta got inspired by the hot girls he saw in Kathmandu and wrote the famous poem ‘Amarawati Kantipuri Nagari’ as he couldn’t find any in his hometown of Chundi-Ramgha, Tanahun and Rudra would again say, ‘divide by 16’. But later during the hike when Rudra remarked that we would reach the top of the hill in 10 minutes we had to MULTIPLY that by 16. The journey to Besisahar passed quite quickly without a dull moment and we arrived at about 5pm.

From Besisahar, we started a steep uphill climb for about 5 hours to reach a place called Baglungpani. We found a hotel there where people were having dinner and the hotel owner requested us to stay at the hotel as it was quite late. But Lava Kafle told us that the main tourist hub was Kapurgaon and we could spend the night there.

When we reached Kapurgaon late at night, we found that it was a small settlement with only two hotels which were both closed and didn’t entertain our request to stay the night. Then we requested some locals to manage some food for us and we decided to stay there but a local boy took us to his house and prepared a decent meal. We were both a bit amazed and taken back by the awesome hospitality shown by the locals and we thanked then with all our heart. On the way to his house, we managed to buy some beers and local Tinpane. By the time dinner was server it was already 1 am and it was time to rest our weary bodies and satiated souls.

We had arrived at Kapurgaon at the dead of the night and were excited to see the beauty of the surrounding area the next day so we woke up early. The scenery from the hilltop where the village was located was unreal. The whole of the annapurna range and Lamjung Himal appeared quite close and were resplendent in the changing shades of the infant rays of early dawn. We started climbing around 6 am from Kapurgaon when one of the participants Shekar Poudel had a knee problem and had to return by bus to Besisahar. We took our breakfast midway between Kapurgaon and Ghalegaon consisting of the makai (roasted flaky corn), gundruk and bhatmas ko achar (pickle of fermented lettuce/spinach and soybeans), green vegetables and mohi (buttermilk). The combination of such an eclectic mix of local delicacies was unbeatable.

We continued our ascent for about 4 hours to reach Ghalegaon at around 11 am. Savouring the natural beauty blessed in and around Ghalegaon we had numerous memorable photo sessions there. Annapurna range and Lamjung Himal shone in all their glory at close range and eased off the tiredness of the hike. We had lunch at Ghalegaon and Bhuwan Shrestha wanted to stay at Ghalegaon for the day and enjoy the local hospitality but Rudra had urgent matter to attend to back at Deerwalk so we all headed back at around 2:30pm. A few of us wanted to return via a different path than the one that we came so we headed to Khudi. Lava Kafle, Bhuwan Gautam and Manish Man Singh sped downhill towards Khudi to reserve a bus to Besisahar. It is a universally acknowledged fact that steep downhill slopes are the most difficult terrain to negotiate in any form of hiking. Downhill trail to Khudi took us about 4 hours and by the end our legs were aching. On our way down, we marked the fork in the trail with arrows (DW –>) to show the rest of us the way.

After about an hour the rest of the party caught up with us and we boarded bus to Besisahar and reached there around 7 pm. At Besisahar we met Shekhar and Ram and headed towards Kathmandu. We played antakshari (a type of sing along starting with the last letter of the previous song) along the way and had dinner at Muglin at around 10pm and reached Kathmandu around 2 am in the morning. It was a memorable hike for all the participants.

Rudra:
I always wanted to hike to Ghale Gaun. Finally we did it! Ghale Gaon is one of the best destination to enjoy Annapurna range without worrying about any altitude sickness since the village is just below 8,000 feet. When we were at Ghale Gaun we felt like we could touch the Lamjung Himal which is one of the peaks of the Annapurna range. The hike was full of fun with a great team of Kapil, Shekhar, Surendra, Bhuwan G, Bhuwan S, Lava, Manish and Laxman. We covered various topics during the hike starting from product development, engineering management to world politics. The night stay was awesome with home cook food and we reached the designation late morning and were able to catch the great breath-taking view of Annapurna range. I find these great white mountains symbol of transparency, stability and patience. They are tough and kind.

Lava:
On the way to Beshishahar, headquarters of Lamjung, whenever Lava Kafle narrated a story, a belief, a saying, a logic, a theme, an agenda, they used to divide it by a factor X as determined by Rudra, Bhuwan Shrestha, Surendra Adhikari and agreed by all other trekkers. Manish Man Singh played with his lens and camera all the time. Bhuwan Gautam sang a lot and shared knowledge of the plants and vegetables found along the way. Laxman Adhikari shared his own interesting knowledge and expressions. Rudra Pandey shared his vision, mission for Deerwalk Inc. while Surendra Adhikari shared own vision on DWIT. Kapil Pandey, always a great guy in genetics expressed his feelings on genomics and future. Bhuwan Shrestha had his own narratives, anecdotes, tales, fairy angels, goddesses, deep water boring, vehicles, shoes, boots, city life and millions of dollars in investments .

Shekhar Poudel threw in his towel after reaching Kapurgaon because last night there was no room to stay and no food to eat until 1 AM when we luckily found a guy wishing to take us his home to have campfire, food and drinks. Bhuwan Shrestha has a video clip of the same stored in a memory chip somewhere. Morning walk showed us heavenly Annapurna Range and Lamjung Himal at close quarters along with Dhaulagiri and Mt. Machhapuchhre.

We reached Ghalegaon in afternoon and were busy taking snaps eating, drinking and enjoying until Rudra Pandey checked his 3G mail service. He said its emergency to attend client call for Deerwalk so we rushed down. Steep downhill with directory arrows and treasure hunts and guidance Lava, Manish, Bhuwan running to hire a vehicle from Khudi to Besisahar.

Going to Khudi Khola was messy, so steep, without water and rest trio Bhuwan Gautam, Manish Man Singh and Lava Kafle finally reached there in 2:30 hours and rested. We all feared about vehicle service. Kapil Pandey kept running and sweating heavily. Lastly we got call from Surendra Adhikary Campus Chief, Deerwalk Institute of Technology that we need to walk to the big bridge at Khudi Bus Station. Dealings, negotiations apart, we were able to find a vehicle.

Bhuwan saw our team miles up with his naked eye although Manish and Lava could not see anything with zoom lens of powerful camera that Manish uses to point and shoot logically. Manish was loved by girls, they asked him for dollars while they did not pay attention to Lava and Bhuwan who are married when running down to Khudi.

Laxman:
This is the first long hike for me at Deerwalk with difficult route at places almost 90 degree steep up and down. I feared that I may not be able to complete it because of my knee problem. Ironically I could complete with ease and fun and my knee pain had subsided after retuning from hike. This encourages me to go for hiking frequently. Despite the difficult and long trail, the hiking was enjoyable and memorable because of picturesque terraced fields, chirping sound of the birds,remote villages, lush forest, magnificant and crystal clear view of the Himalayan ranges Machapuchhre, Annapurna I, Annapurna II and Lamjung Himal and typical ethnic culture. It was a tremendous hike with full of unforgetable laughable moments that were created with the clause ‘Divided by’ and ‘Multiply by’ made by Lava Dai and Rudra Dai during the hiking.

Kapil: Nepal is beautiful every one knows that but the difference lies in knowing and exploring.

56 thoughts on “Hiking from Besisahar to Ghale Gaun”