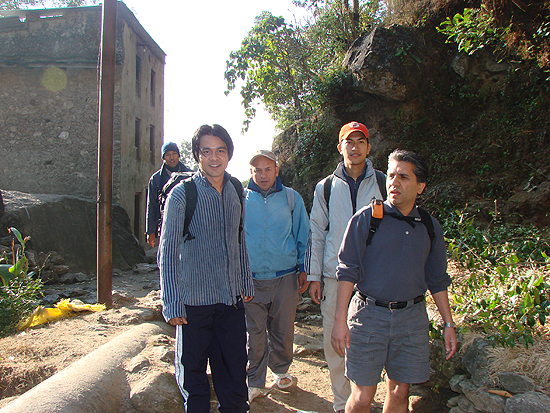 The track was steep, almost precipitous, their noses touching ground at times. And on top of that, they decided to take a detour through a dense forest where they had to clear bushes to proceed and hang on to branches to ascend. That particular route was tough but gratifying. Maybe, it was gratifying because it was tough.

Most of the racers had no problem making it to the first pit-stop at Shivapuri Height but some, particularly the McLaren, the Honda and the Ferrari, puffed and puttered all the way and made dozens of unofficial pit stops.

They refueled themselves with ripe juicy oranges and feasted on the splendor of the Himalayan range in the distance. Then they descended to Chisapani where they sipped a hearty cup of tea each and rested for about 19 minutes. Then, they again vrroomed vrroomed their way back.

By 3:00 pm they were back at Karma Hotel at Sundarijal, having covered 38 km within 6.5 hours, their average speed being 5.85 km per hour. Well, that speed may not look very commendable but considering the difficulty of the track it is awesome, you sluggish folks. (Earlier, the same route, without the detour, had taken over 9 hours to complete.)

Alonso, the indubitable force behind the race, finished first and Raikkonen finished last.

Then it was time for refreshing Beer, nourishing Boiled Chicken & Vegetables, and invigorating discussions on Ways to drive Nepal in Full Gear.

Finally, the race ended with a shopping spree for Chinese Brandy and Whiskey. 4 bottles of brandy and 7 bottles of whiskey, in total, made their way home, sweet home.

MESSAGE TO OTHER RACERS AND WANNABE RACERS:

This particular race was intentionally extreme and we pray that nobody gets discouraged by its extremity. It has been decided that the upcoming races will be for shorter distances within longer duration so that even buses, trucks, motorbikes, bicycles and rickshaws may join. We hope to see you next season. Be there!!!

Ready to go from Sundarijal

Did you noticed it! In front of the Syalmati

Feel the difference of Green and Dry

Mountains Peeps from the distance at Mulkharka

Enjoying the view with cheese and biscuits

so the shoes have

Find the roads in the part of the Shivapuri Hills

One Night Stay is recommended

Time to return from Chisapane

The trails and hikers

May be Wild Chrysanthemum

Supply to his Cattle

The trail invites you

Hero from the Area

Keeping away from Birds

Bye Bye Sun for the Day

11 thoughts on “Hiking from Sundarijal to Chisapani”