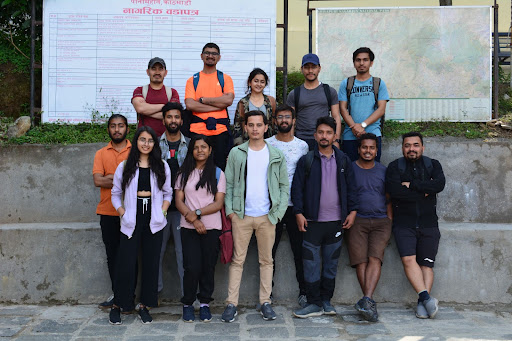 Every other Saturday was quite similar, sleeping upto late hours and doing nothing productive. But last Saturday 7th May 2022 was really different with lots of adventure and thrill waiting for us, we employees from Deerhold Nepal went on a hike to Baghdwar approximately 2600 meter above sea level. The plan was to gather at Deerwalk Complex early in the morning at around 6:30 AM. After gathering all the hiking members, we departed to move towards our destination by 7:00 am. Some of our colleagues joined us on the way. At 7:30 am we stopped at Budhanilkantha which is situated below the Shivapuri Hill at the northern end of the Kathmandu valley. Also got a chance to visit Budhanilkantha Temple also known as Narayanthan Temple. And we decided to have a light breakfast at a local teashop nearby the Temple. The hotel staff served us with Aalu chana, Samosa, Jerry-Swaari, and lemon tea. We were amazed by the Swaari which was famous there for breakfast. The breakfast worked as fuel to us which was definitely going to help us complete our journey.

Well, after assigning the duty to our digestive system we started to move. We reached upto Shivapuri Nagarjun National Park Gate in our office van which was also our entry point for hiking. The total hike distance was around 16 Kilometers from Shivapuri Nagarjun National Park Gate, which was an uphill climb to the destination. We began our hike at exactly 8:35am. The day was sunny but the shade of tree shadows helped us from the scorching sun. After a 30-minute plain walk from National Park gate, we started our uphill climbing which was intense because we chose the Jungle path where we created our own way for climbing. We climbed up the hill for around 1 and half hours  and then we reached Nagi Gumba. For around 10minute we sat under the shade of tree to keep ourself calm. The weather was so clear that the view was breathtaking and the hills were covered with greenery and we were amazed by seeing the Rhododendrons from the start of our hike, it almost felt like a huge red blanket was covering the green hills. After breathing some fresh air we took some photos on gumba and moved ahead. The hike was getting harder, we were walking on a steep hill with a very narrow passage. But we wanted to be more adventurous so we entered the jungle and started climbing uphill admiring mother nature and people around us. The way we were moving was a bit dangerous but we helped each other and finally we thought we reached the middle of our destination. It was the best time to interact with colleagues from various departments of deerhold.

For around 20 minute plain walk we reached a ground where we sat for around 15 minutes and had some snacks brought from our home. Some of us were busy taking pictures of each other, Laughing making some funny weird jokes. It felt like the destination we were planned would never come to an end. After climbing a steep hill for 1 hour 45 minutes finally we reached Baghdwar, the origin of bagmati and home of todke baba. We wanted to capture every memory so we started taking pictures. But The funny part was that we got some scolding from a woman who was there for meditation.Finally after the successful uphill hike we returned back to Shivapuri Nagarjun National Park Gate by 3:30 pm and went for lunch on Deerhold van. I think it was our hunger or maybe the best company we had the food had more flavor and tasted much better. After having food we headed back and reached the premises of Deerwalk Complex at around 5:30pm.  Dropped off some of our friends  along the way, and ended the hike to Baghdwar. It was my first time hiking as a fellow at Deerhold. The experience was fantastic which made me think to hike more in the upcoming days. Not only did we enjoy nature, but we also gathered a lot of experiences and memories with our leaders and friends.