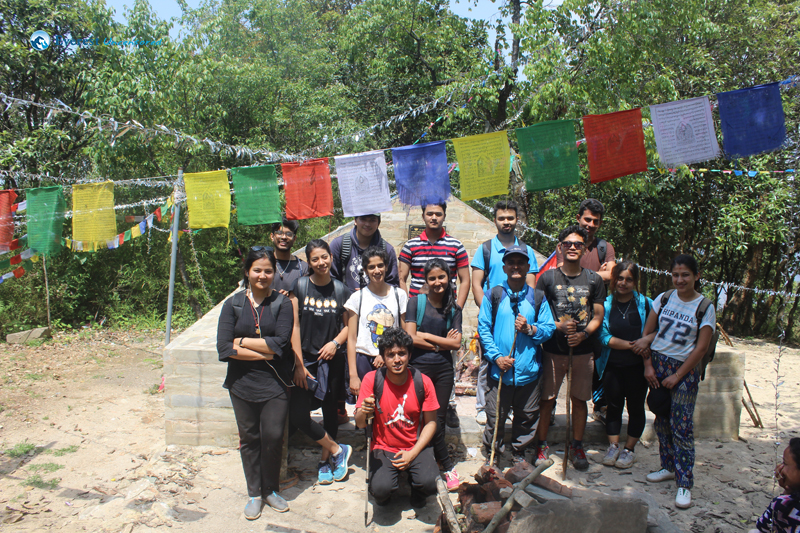 Prior information sent before a week, the hiking and adventures club had organized a day hike to Champadevi Temple. We were called at the college at 6:30 in the morning. We had about half an hour drive to Balkhu. There we had a short tea and samosa breakfast in one of the hotels nearby. About fifteen minute drive from Balkhu we reached to Pharping where we ought to start our hike. Pharping is approximately 16km away from the valley. This hike was a power pack hike which was executed from a curvy hill that lead to a no road zone.

We hikers had to literally climb a hill with only trees and sloppy ground filled with lots of mud that couldn’t provide a proper grip.

We hikers had to literally climb a hill with only trees and sloppy ground filled with lots of mud that couldn’t provide a proper grip. Falling and slipping were the way of hike. Being kind of lost at the jungle we could only imagine that at some time or some point we could at least find a road that didn’t appear any sooner.

About two hours of hike led us to stairs to Champadevi. As the saying goes, “No god is easier to find”, the hike was one of the best example of this one. Champadevi Temple was a small temple with few monuments of god and goddesses. Returning from the Temple was quite easier than climbing because this time we had the stairs and not the hill that lead to nowhere. We had short breaks on the way. But the breaks made us nothing but tiresome. After about two hours of hike we had finally arrived to Hattiban resort where we could quench our thirst, fill all of our empty bottles, go to washroom and other things which a normal human would practically do after finding a source of hope in the lost woods. The Dashinkali road was nearly an half an hour hike from the resort. The woods had slippery floor all around. Balancing oneself was the best survival task one could have learnt from this hike.

Champadevi hike could be one of the best hikes if you want to see the panoramic view of all three cites (Kathmandu, Lalitpur, Bhaktapur) within the Kathmandu valley. At the height 2278 meters, Champadevi is the third highest hill in the Kathmandu valley from where hikers can indulge the beauty of mountains like Mt. Everest, Langtang, Annapurna and many more. If you are planning for an adventurous trip. You can pick Champadevi but make sure to carry enough packed foods, some fruits and at least two liters of water in your backpack because the odds are high that you might miss the track in the middle of the hilly forest.

On May 21, 2017 hiking club at DWIT organized a one day hike to Champadevi. The hikers departed from DWIT at 7:00, took light breakfast at Balkhu and reached Dakshinkali at 8:30 from where the hike started. After asking with the local people we headed towards Champadevi.

As we started we had a guest along, the sun, we didn’t wanted it, but it was inevitable. We continued our journey and found a Bayberry (kafal) tree on our way, we picked few berries for refreshment and enjoined it with great pleasure.

The real struggle started when we lost our way in the middle of the hilly forest of Bansudara. So, we had to either back off or move forward making our own way into the unknown.

The real struggle started when we lost our way in the middle of the hilly forest of Bansudara. So, we had to either back off or move forward making our own way into the unknown. We accepted the latter option. After climbing the hill for about 5 hours we reached Champadevi. On the top we could see open shrine of Champadevi and Buddhist monastery.

After exploring the beautiful area we headed to Pherping village. On our way back we ate our packed foods and fruits near Hattiban resort in a serene pine forest. It took around two hours for us to get down. After that we headed our way back to Kathmandu taking away an adventurous and beautiful memory.