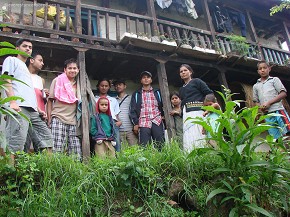 DAY 1
Escape from Kathmandu Valley
Unfortunately, it was the day of strike in Kathmandu valley. With a small discussions with the protestors at Koteshwor, we headed towards Bhaktapur and then Jagati so as to make a narrow escape.

Vehicle Tour to Charikot
It was nothing less than a good tour on the office vehicle. We had the advantage of both hiking and tour in a single package towards. We were all equally excited and curious about reaching the destination. Some jokes and gossips on the way, enjoying the nature and taking wonderful snapshots of the beautiful and natural views of mountains, rivers, streams, we reached Charikot, the district headquarter of Dolakha.

Dolakha, Bhimeswor and Charikot
Charikot a town situated on top of a hill and surrounded by mountains is one of the most wonderful places in Nepal. With little rest, we went to the famous ‘Dolakha Bhimeshwor’ temple. Legend has it that the idol perspires as a warning of a possible disaster in the country.

We continued our journey towards Jiri crossing beautiful Tamakoshi River, small Maina Pokhari village and savoring the greenery on the highway. Finally, we reached ‘JIRI’ at about 7:00 PM. With little rest and some tea, we decided to start our hike from Khawa. Among 13 hikers, only 9 decided to go to Thulo Patal as it was already getting dark and rest planned to stay at Jiri and hike to the School, paper factory, monastery and cheese factory the next day.

As compared to previous hiking at D2, this one was completely unusual as the real hike started from 8:00 PM (hiking under night sky). Added, we forgot to take the dry foods that we had bought earlier. After buying small torches for each of us so as to kill the dark and help ourselves to walk in night, we moved ahead towards our real destination ‘THULOPATAL’ to be a one day villager. The supposed half an hour hike did not end even in an hour. All of us started to wonder if THULOPATAL existed at all. “Are we on the right trail? If yes, how far is the destination?” These questions started haunting us. The lights were getting dimmer and the night was getting deeper. Then to our relief, we reached a place called ‘Lahare Mane’ at 9:15 PM. There we came to came to know ThuloPatal was still far far away. Having tea and a little discussion with the local villagers over there, we again decided to continue our hiking over the night sky. ‘JUKA VOKA CHAN’ (leeches are hungry) was the phrase used by villager to lure us to stay in his hotel. But, we had to reach our Dhurba dai’s ghar at ThuloPatal, so we had no choice but to move on.

The Rescuer ‘Tilak Bahadur Tamang’
Moments later we came to know that we actually were to reach DandaKharka, situated in remote hills of ThuloPatal VDC. Our previous assumption of half an hour hike was then a big blow to all of us.
As the clock was ticking towards midnight and most of the people were sleeping in their cozy bed, nine of us were wandering in the forest seeking the right direction towards DandaKharka. We didn’t know we were heading towards the wrong direction until we heard someone cough nearby. Luckily, the man replied to our shouts and decided to join us.

Dhurba
Finally, we reached Dhurba’s house under guidance of Tilak Bahadur. But to our dismay, we came to know that there were many persons named Dhurba in that VDC and the Dhurba we were referring lived at about half an hour’s walk from there. We had no option, but to walk. Everyone was quiet on the outside and equally furious from the inside. Tilak was a great motivator. After 5 hours and 30 minutes of continuous hike over slippery and dangerous jungle trail we reached our destination at 1:30 am (the house of Dhurba Kafle). Dhruba was a cheerful person and he couldn’t believe we had made it to his house under such conditions. We enjoyed the dinner on the top of his house (Buigal) and discussing the earlier events, we then went to deep sleep.

DAY 2
Warming up
We had to wake up early in the morning as the village life had already started. We had no idea where we were, and it was a surprise to look outside and find ourselves in the middle of a cliff. Dhruba’s family members were nice to us and served morning tea to us. It was already getting hotter, and we had a big day ahead. Four hours of hiking lay ahead, so we gathered our belongings and bidding goodbye to Dhruba, we decided to return back to JIRI following alternative descending trail at 8:00 am.

Devi’s house
The journey back was rather interesting. We met different people on the way and shared wonderful experiences with them. One of them was Devi. We reached her house on the way for information on the actual way to JIRI. She served us plums (aalu bokhara).One of us took her photos as if she were modeling. Another one talked to her and he came to know that she was not married yet.

Fulfillment of the theme of the Hiking

We met farmers busy in their fields.. As fulfillment of the theme ’Being a one day villager’, we decided to help them in their work. It was good to give a helping hand to an old lady. We took her photo along with her son and promised to send it to her. We left the village back and continued with the descent. As we were already hungry and no signs of any shops or hotels were to be seen nearby, we asked a young boy named GAMBU BIKA to prepare some food for us. He boiled some potatoes, and provided us wheat, maize and some plums. We thanked the boy and moved forward.

On the Way
We had already been hiking for five hours, and Jiri was still a distant dream for us. Then suddenly it rained. As we waited patiently for the rain to stop, we realized we weren’t going to make it to JIRI if we were to keep waiting. We bought an umbrella from a man who was returning to his home. Then, another man gave us his umbrella on the condition of returning it back to him by dropping it in his friend’s shop in Jiri-encouragement for hiking in the heavy rain.

Get Together
As some of us had hiked faster and some were lagging behind, the hikers reaching JIRI first had to wait. People who stayed at JIRI reached Hat Bazaar at 5:00 PM and finally, all of us were altogether. We decided to journey back to Kathmandu and it was 12:30 am Monday when we reached Kathmandu.

140 thoughts on “Hiking from Khawa to Thulo Patal”