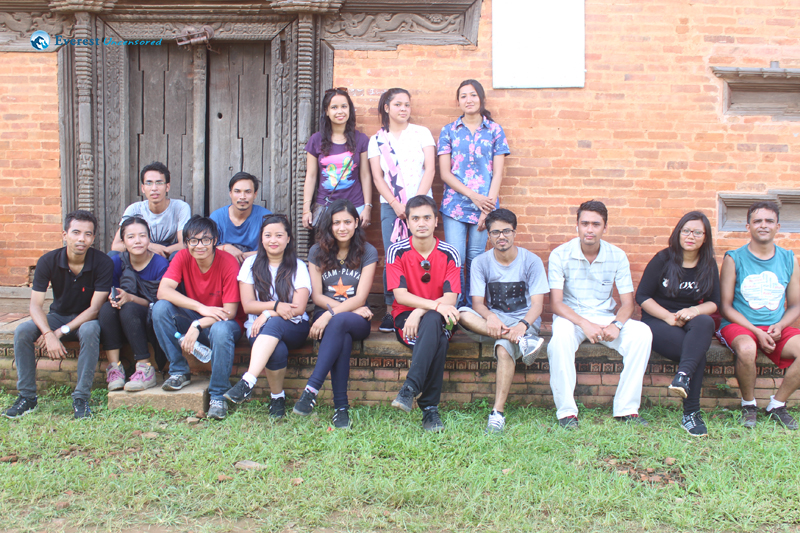 Early morning before 7 AM , Pratiksha enters Deerwalk Complex on her scooty smiling at Madhukar and Lava. Hiking Co-ordinator Nuja arrives and Shyam is seen at the front seat of the vehicle. Handsome Roshan wearing goggles appears at the turning of petrol pump as we leave office for the long journey. Barsha runs towards the bus as she notices us waiting to pick her up.

Prakrit sheds his handsome smile as Ambu and Sushma too enter the vehicle. Next, we pick Lujla, Prakash , then Rati and finally Sunit as we take steep narrow Naikap road to bypass traffic jam due to main highway expansion project. Through the winding beautiful road alongside green paddy fields and jungle on north we reach a tea shop and refresh ourselves with gram and black tea. A lot of group pictures were taken while Roshan knew his friend who manged rest room for us as the restaurant did not have one. After some rest , we reached Naagdhunga after 3 kilometers journey.

Thank god, we did not face much of traffic jam or clogged highways due to huge trucks and buses

. We reach Galchhhi, Dhading district, Nepal and Rabin stops the vehicle by side of suspension bridge spanning 261 meters. It was so beautiful above the mighty Trishuli river , a lot of photos were taken. Next we travel alongside the river towards trishuli with occasional waits when big trucks or trippers appear hurtling by.

The beautiful scenery continued until we reach Battar, Nuwakot and search for best restaurant for meal. Our Smart team took the number to dial to pre-order meal in time so preventing any waits. Then we took a light breakfast in a restaurant near Trishuli main market before walking towards the Nuwakot Durbar the is seen very far on top of very tall mountain.

We feared leeches on the first short cut that had nasty slippery red mud so we had to be careful not to fall. The second shortcut was very tough. It was very hot. Our weather forecaster Prakrit guessed 30 degree celcius and 100% humidity. No air could be felt. It was like Oxygen was absent. Sweating heavily we cursed the severe weather but adamant to go ahead and reach our destination. Well, the story does not end here, as we heard friends echoing in the jungle,” Ambuuuuuuuuuuuuuuuuu , Sushmaaaaaaaaaaaaaaaaaaaa “ who immediately replied , “ we are here already”.

Then We rested for a while and drank a lot of water to hydrate ourselves. Nuja took out different kind of pickles so we get energy for next arduous long journey. Walking slowly in the scorching sun trying to get shades of trees sideby , deep dense green forest sent chill behind spine if some ferocious wild animals come to confront us.

Shyam and Pratiksha discussed on implementing big data analytics in Admin/ HR section and there was a discussion of great length that helped us walk easily. Lava keeps on saying , see there is office van waiting when the road is straight , but we found only curly twisted curved roads , straight road portion was nowhere to be seen in the treacherous mountain that makes us climb more and more.

Clock ticks by and finally we reach a corner with cold air and big tree that would give us shade. Introductory videos , selfies, welfies were taken to keep this sweet memory for ever. Light snacks were served by Nuja to whole team. Prakash and his umbrella was popular. After having stomach filled a bit we started walking again. We reach a natural stream of water and see Rabin bringing office van there so he can use the natural, pure, fresh , and clean water there. Rabin says, “ Oh Our team took hefty time to reach here, it should have been earlier”. He did not know the pain we faced while hiking up to that spot. The Three musketeers preferred to walk tot he Nuwakot palace while rest of us took the comfort of seat of van going hilltop peak.

The big notorious Nepal Earthquake 2015 has hit the palace hard. No one was allowed to visit the inside with big noticeboard explaining why we cannot visit inside of the durbar. Armed Nepal Army protects the palace 24 hours a day and he speaks in rough tone asking not to take picture of this side or that side. Some of us walked far while some stayed to take pictures of the historical palace that was used by then King Prithvi Narayan Shah some 300 years ago to attack Kathmandu Valley before making unified single Nepal. Next we took a lot of selfies and welfies and group photographs. Many of the smartphones lost battery power and were shut down. The nature around the Nuwakot Palace is exemplary. The local houses were gone due to the massive earthquake and new habitation being starting. Rabin showed us his home that was destroyed by the same quake. We also were lucky to meet Rabin’s father there who blessed us a lot.

Next we were riding down Nuwakot in Office Van and stopped at the restaurant where meal was pre-ordered. After managing chairs and tables , we started gobbling the tasty meal. After resting a while, we started our journey back to Kathmandu via same route we had come. Shyam was busy calling to an elderly lady whom he always donated some bucks while passing across the galchhi road. Lava narrated his life story and it was great discussing several factors of one’s personal and professional life. We did not get any traffric jam and reached NaagDhunga at 6 PM saving one hour time of projected 7 PM.

Pratikshya Dhungana
Early morning we gathered up with the utter excitement for the day that was mostly awaited.

.Moreover; we completely cherished an opportunity to have a day off from the daily hectic work schedule. All the preparation for hike were made a day earlier by Nuja Di(The Hiking Coordinator) and hence we were all set to start the hike to our destination -the historical Nuwakot Durbar which took about three hours to reach.

The infrastructure to our destination was well maintained and relaxing. In the long three hours bus ride we had lots of fun cracking jokes, listening to Lava Dai’s wow stories, Prax’s loud random singing and epic dance moves by Barsha. Roshan with his speakers blazing repeating his favorite song again and again.Shyam Dai getting irritated with the continuous repetition of Roshan’s favorite rhythm was pretty hilarious.

We started our hike from a place called Bidur. During the walk we got chance to see extremely enchanting views. The panorama was encircled with beautiful valleys, forest, river and agriculture lands. We continued hiking following the trails throughout the roadside that bypassed the tarred roadway. The weather was too hot for hiking but the encouraging and funky team member’s company made it easier and worthwhile. As we walked, we stopped every few steps as an excuse to take photos. Walking at a leisurely pace soaking in the beauty of rural Nepal was just awesome.

After reaching the top, there was the main Durbar and temples which sat beside the historic architecture, the antique wooden art of shah dynasty and a beautiful garden. We could see the comparison chart before and after the quake and felt myself unlucky that I could not see it’s true beauty. Though the Durbar was totally affected by the recent earthquake, its beauty was still overwhelming.

With so much laughter, fun and beauty all around, we returned back to the Deerwalk premises. This is one of the memorable hike that I would never forget.

2 thoughts on “Battar to Nuwakot Durbar”