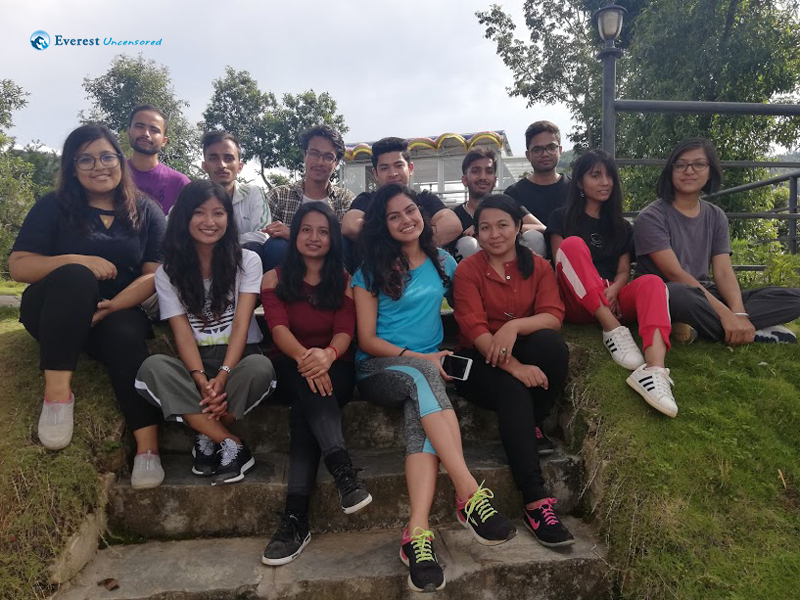 Niza Shrestha
Khopasi to Balthali hike is one of the most delightful experience one would not want to miss. Located on the outskirts of the valley, away from the daily hustle of the city, lies a village so peaceful and serene. The secluded Balthali Village, just within an hour drive from Kathmandu, provides a rich cultural and traditional civilization untouched by modernity, with a splendid view of different Himalayan ranges. It has only been a month since I joined Deerwalk and getting this opportunity to explore the beautiful hiking trial filled with natural varieties of floras and various terrace fields was just a cherry on top.

On September 1, 2018, me along with my 12 colleagues aka hikers, united to begin our journey to the Balthali Village. 8 out of 13 hikers met at Deerwalk complex while the rest got in the hiace from their respective stops on the way. Thus, began my first hike of Deerwalk and also my first hike ever. I was super excited. The journey began at around 8 o’clock in the morning. During the drive, everybody introduced themselves, since we all were new hires, and got familiar with each other. Everybody had their own excitement level and energy. After an hour and a half drive, we stopped at Panauti for breakfast at a local tea shop. After the toothsome breakfast, we headed for Khopasi, from where our actual hike started.

The walk till here made me feel like this hike is going to be a piece of cake, but how would I have known what fate had awaited me.

It was a very sunny day. Everybody carried their own share of food and water, and started walking towards the ultimate destination, Balthali Mountain Resort. Some wearing caps and some carrying an umbrella, but everyone with the same motive, began their hike. After walking for about 40-45 minutes, we reached the Panauti Hydro-power Reservoir. The walk till here made me feel like this hike is going to be a piece of cake, but how would I have known what fate had awaited me. We crossed a few meters long suspension bridge, which itself made us feel dizzy because it was dangling high above the ground level. As the bridge ended, an uphill path started. It felt like we were climbing mountains. We stopped at a particular point to rest and regain our energy. While we rested, all of us shared our own experiences filling the surrounding with our endless gossips and loud laughters, by then, I realized that new friendships were forming and new memories were being made. After resting for about half an hour, we again started marching.

With a lot of determination and effort, we finally reached our destination. We had a long distance to walk, but with the company I had, it just felt like a kilometer away. Covering the distance with lots of jokes, laughter, inspirational talks, video recording, clicking pictures and most importantly togetherness is what actually made our journey wonderful. Balthali Mountain Resort was a beautiful resort and their hospitality was admirable. By the time, we reached the destination our stomach had started grumbling from hunger. Since the food was not ready, we decided to play the most popular game, the murderer and the innocent, making us nostalgic and bringing back all our childhood memories. Over and above that, Nirajan’s skills to host the game was just an icing on the cake.

After playing about 3-4 rounds of the game, we ate our delicious meal and went outside to relax. The view from up there was very soothing for our eyes. We were enjoying the ambiance so much that we didn’t even realize that it was almost time to return. On our way back, a friendly match of “Antakshari” was started between the boys and girls. While Pragati was the star player from the girl’s team, Anuj was declared the same from the opposing team. We reached Khopasi at around 5 o’ clock. The way back was not so difficult due to the constant singing, giggling, laughing and enjoying. We distributed the Deerwalk stationaries to the children playing nearby which brought happiness on their faces. Some of us also joined to play football with them. Then, we all got into the hiace to end our journey. Everyone was exhausted and drowsy but it was Rabin Dai’s catchy Lok Dohori songs which brought life to our ride back home.

As John Muir once said, “In every walk with nature, one receives far more than he seeks”. On the night of first of September, I felt the same thing. I learned so many things and so much from each and everyone and more importantly I gained new experiences. At the end, all the tiredness, the lather and the optimism to not give up was all worth it.

“Wherever you go, becomes a part of you somehow”, they say. I had always heard this, but on the 1st of September 2018, I realized the true essence of it. The sun hid inside the cluster of frosty clouds that day. I was standing idle waiting for the bus, hoping that the weather stays the same entire day. Not even five minutes had passed by, and I felt like I was in Sahara. It was boiling hot. I felt that my back and my head were being cooked up. As soon as the bus arrived, I took a deep breath as I braced myself for the adventure I was about to move into. I turned myself around and walked into the door, sealing my fate for the next seven hours. Discussions over which song is to be played and who will speak what in the video was emerging so rapidly that I felt my friends could speak over the frequency of sound waves. Along the way, we stopped for breakfast as one of our dearest friends restrained himself from reading the email and came empty stomach for the trip. We were served with delicious “Samosas” (deep fried vegetable dumplings), tortillas, and what not, a hodgepodge of vegetables packed with diverse flavors. Aah, my cravings! G. B. Shaw said it right, “There is no sincerer love than the love of food”. Probably half an hour after breakfast, we reached to Khopasi, where we had to start our hike. I could feel the heat from the sun pervading in my body before even having myself walk. Having our bags and shoe laces held tight, we started to walk towards the Panauti Hydropower Reservoir and Balthali Mountain Resort. Crossing the roads covering our mouth to evade the dust emancipating from the potholes filled with sand, walking through the suspension bridges that shook like an eight Richter scale earthquake wasn’t as trivial task as I thought it would be. After few hours of walking, we took a quick break to quench our thirst, which would eventually drive us the entire way to the top of the hill.

Having a sense of determination and eagerness to reach to the destination, we started walking all that we could. “C’mon, we’re almost there!” My legs and arms were shaking. Sweat was tripping down my face. Every step felt like thousands of needles were sinking into my head. I couldn’t take that heat anymore. However, few of us managed to put one foot in front of the other, again and again and again. After half an hour of walk towards the top, we realized that we had come the wrong way and our destination was long, back down. Cursing the person who gave us the wrong direction and showing all our irritation to the roads, finally we reached to the Balthali Mountain Resort. Our body wasn’t listening to us, we sunk to the ground. As we waited for our food, we played a game of thief and police, bringing back our childhood memories, then had our lunch served with beaten rice, ginger rhizomes, potatoes, garbanzo beans, chicken and curd. All those moments of laughter and jokes captivated us so much that we forgot, it was time for us to return. Even though it was sad that our hike was coming to an end, we lit up the ambience by playing “antakshari” (a game played with singing songs) all the way back down. While coming down, we also donated Deerwalk stationeries to the kids over there. The efforts we made for this hike to succeed was worth trying.

Today, when somebody asks me what did you do in the hike, I say, “I made memories worth remembering, I made friends worth living with, and I made time for serendipity. Memories of Sanskriti’s continuous attempts to get a good video and photograph, Pragati and Anuj’s encyclopedic mind of songs, Nabin and Shreyansh’s roommate bonding, Nirajan’s fame among girls, Kamana’s golden mic, Niza’s spirit and effort towards the hike, Rojina and Rewoti’s walking speed, Gita’s luck of being the murderer in the game, Utsuk’s lunch booking, and ofcourse, me, Sachet’s successful attempt of being the best murderer in the game, will always remain and cherish in our lives.