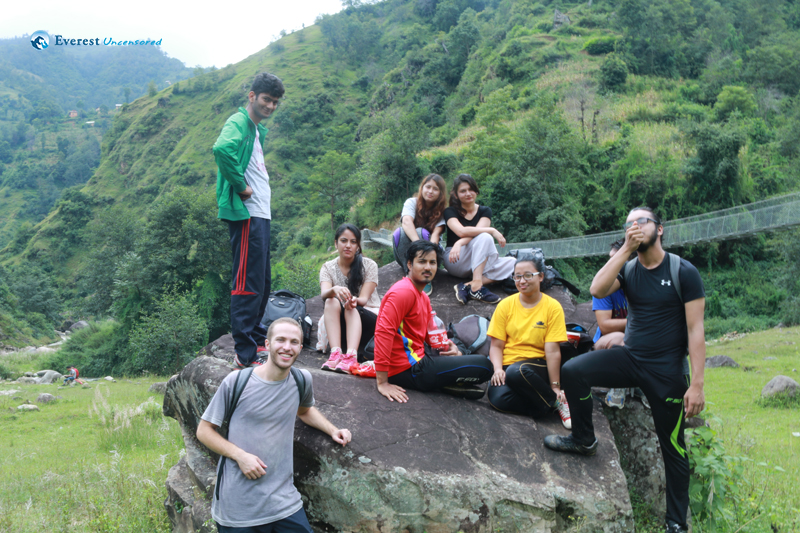 “Getting to the top is optional. Getting down is mandatory.”
― Ed Viesturs,
(Wish I remembered this quote before signing up for the hike.)
When the hike form came, like it does every few weeks, I signed up for the hike partly because I wanted to go on a hike. I hadn’t gone in a while and I was free that Sunday. However, the major reason was that I had edited hike reports of the Khopasi to Balthali hike a while back, and judging from those reports, the hike was relatively easy. So, I thought why not?
A few days before, the people in the final list of the hike got an email telling them to get to the college premises at 7:45 sharp. But our very enthusiastic hike co-ordinator called me at 7:42 to tell me to be on time or be left behind. No wonder I was the second to arrive at 7:43. I was just outside the gate when I got the call.

We started off with a light and salty breakfast on ‘Mama ko pasal’ and headed off to Khopasi in our Deerwalk bus. All along the way, all of us were praying for sunshine and hoping for clear skies. But the light rain stopped only to start again. Thankfully, the rain stopped for good after our bus reached Khopasi.

Of the many bridges that I wanted to see after reading the reports, one came to view almost immediately. Everyone one of us was excited to see it and most of us just ran towards it. Needless to say, we stayed on the bridge for a long time. We then took an unnecessary short walk to the nearby dam and returned to the bridge again. That started what was to be a long long journey to a resort that was at most 2 hours away from the bridge.

We were to have lunch at the Balthali Village Resort. And because we were on a hike, we took the longest possible route to the resort; the route that went from route Khopasi to Ladkeshowr to Nepane and finally to Balthali. We started off at Khopasi intending to go to a temple called the Ladkeshowr Mahadev but we took a few wrong turns and just missed the temple by a few minutes. We did get to the shores of a river though where we spent a while eating, playing and just relaxing for a long time. From Ladkeshowr we headed to Nepane. But this time, we asked everyone we met on the road where Nepane was and how to get there. Every reply to the question, no matter how near or far we were, was “15 mins”. And their 15 mins was longer than double the time.

My group was lucky enough to meet a very friendly person who was also heading near the resort. He took us there with a shortcut. The road was barely there. In most places there was no road at all. But he got us there at least more easily than the other group.
The resort was beautiful. It was a quite homely place with really good food.

On account of being very hungry, everyone ate a lot taking second and third helpings. One friend remarked that we ate like hungry kids eating at a charity. After eating not unlike “hungry kids at charity”, we relaxed at the resort; sitting, sleeping, reading and playing.

On account of being very hungry, everyone ate a lot taking second and third helpings. One friend remarked that we ate like hungry kids eating at a charity. After eating not unlike “hungry kids at charity”, we relaxed at the resort; sitting, sleeping, reading and playing.

Soon enough it was time to head back. But as soon as we headed out the main door, heavy rains greeted us and forced us to return back to the comfort of the resort. After the rains stopped, we headed off time. This time taking the long but relatively easy route back to the bus. The road was easy and a treat after the harsh roads of the hike that day. In raincoats, we walked in leisure towards the bus that took us back to the college.

Early morning, followed by damp weather, the longing of the thrill during hiking was unusual. It is not like most of us have not visited many places or something else but the experience is always a masterpiece. Exploring the real beauty by oneself throughout the journey seems a fairy tale to those who have not got that opportunity. Being in harmony with nature, the sound, the insects and even diving deep inside oneself is all about hiking. Moreover, finding oneself is what they call one of the consequences of hiking.
The early morning started with gathering at the college premises at about 6:45 pm. Gossips about the destination and the trail were overheard. A total of 13 students along with the English instructor, went to a nearby shop to satisfy our hunger. Making tummy happy with eggs, fried potatoes and grams along with juices, we rode off happily towards our destination, Panauti. It took about two hours to reach Panauti from where our hike was supposed to get started. The rain had made the road more slippery and muddy. It was difficult to prevent our shoes from getting muddy. In the fear that someone could slip in such a road, it was indeed needed to be careful while walking. First of all, the troop visited the Panauti Hydropower Project. It was followed by photographs and chattering of every member. A long suspension bridge was welcoming the troop before the real trail of the hike was started. The depth that was seen from the bridge was breathtaking and scary as well. Walking through the pine forest with chirping sounds of birds and the unusual sound of insects had made our journey livelier. In between times, the suspension bridges were on the way that had made the members more interested in taking photographs and scaring each other throughout the bridge. The uphill trail that followed the bridges was tiresome. Along with that the smell of the maize fields in between paths gave hikers a sense of fresh air that calmed tired body a sigh of relief.
The journey was full of laughter and gossips along with the music played by the hikers. The path was covered with mosses and also reddish path was found in between the journey.

Only the greenery of nature could not satisfy our hunger for longer periods. So, the team sat by the side of the river on the big rock and enjoyed the food that was taken beforehand. Some of the hikers even dived into the river and calmed themselves with the cold water.

Only the greenery of nature could not satisfy our hunger for longer periods. So, the team sat by the side of the river on the big rock and enjoyed the food that was taken beforehand. Some of the hikers even dived into the river and calmed themselves with the cold water. The excitement was noticed in the bright faces of every person. After that, our next destination was Ladkeswor Mahadev. So, climbing the uphill was too difficult. Frequent breaks were entertained in between times. During the journey, the view of the hill which was covered with the deep green grasses was able to dazzle everyone for a moment. Most of the hiker could not stop themselves from whistling and showing the happiness by shouting and all. Some of them even lay on the grassy field for some time. However, the destination Ladkeswor Mahadev could not be reached because of the trail that was missed.
The journey was continued through slippery maize filed paths while heading towards Nepane hill. Now, most of them were eagerly waiting to reach the Baithali Village Resort and enjoy the time there. Having conversations with the locals and asking about the trail to reach our destination was going on. The sequence of walking downhill, uphill and also the straight paths were continued. Along with it, the marvelous view of the green hills and forest could not be taken out of sight throughout the journey. After crossing another suspension bridge, and climbing uphill, the last destination of the hike, Balthali Village Resort was reached. The tiresome journey could not stop hikers for laying into the comfy chairs for some time. As the food was already ready, everyone galloped to quench their hunger with fresh and delicious food. It was about 4:30 pm and it started to rain heavily. Even though with raincoats and umbrellas, it was difficult to go downhill which was slippery. Thus, taking the suggestions of the locals, the group followed the easy trail to reach where we left off the Deerwalk van.

It was about to get dark and the hikers had thought that it would be very late while reaching home. Finally, when the sight of the hydropower was caught, everyone took a sigh of relief. The Deerwalk van was not too far from that place. Thus, Deerwalk van headed towards the college when everyone gathered.
As a whole, the hiking was more about exploring the dazzling greenery of the nature and having fun. The trail that was heard as easy was found in one of the difficult trail so far. The suspension bridges, the river, the pine forest and the whole company were overwhelming.