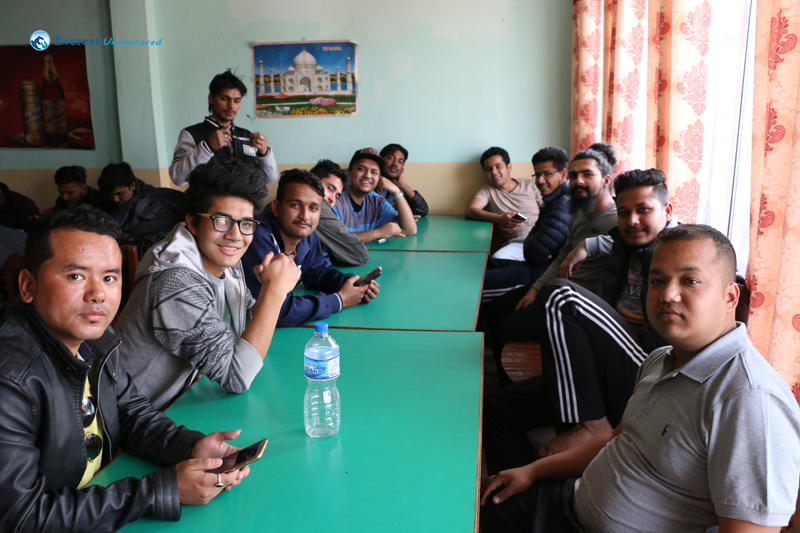 As the morning sun rises, it brings vitality and hope that guarantees a fresh start every single day for the rest of our lives. On third November 2012, students of the Class of 2016 began their new excursion as B.Sc.CSIT undergraduate students at DWIT College. Over their 4 year time period on college they all battled through hardships and restless evenings. They have given their best to succeed in their course curriculum. Presently, at long last they have finished their study adventure and everybody has turned out to be smarter, brighter, more able and better prepared to go up against the world. Presently, they have become graduates and have turned into expanded portion of the DWIT family and are DWIT alumni.

The adventure began from Deerwalk complex. 29 individuals from the Class of 2016 were joined by the Campus Chief Surendra Nath Adhikari for this 5 day hiking. The gathering was encouraged with a Micro transport and the trip began at 8:30 AM. They crossed Thankot at around 10:15 am. When they arrived Naubise, they had their lunch and proceeded on their adventure again with more enthusiasm.

They landed at Bhorletar at around 3PM. The lodging was comfortable and lovely place. After freshening themselves, they all began visiting the place, taking pictures all around. A portion of the individuals went by Shivaratri Mela at Shaneshwar Mandir which was being celebrated at the time the group arrived. This was trailed by a coffee break. The climate that day was cold and everybody warmed up with hot tea. They all assembled in their individual rooms that night and began playing cards. Everybody was energized and anxious to begin the climb the following day.

After breakfast, the crew began their trip towards Gilung. It was expected 6 hours hike from Bhorletar. The way was troublesome for some first time explorers however was generally simple for prepared climbers. The graveled street, the waterways, the mountains, the cloud sand in particular the perfect air were all pieces of this hike experience. They were mostly on the way for the group to arrive at Gilung.

What any climb does is, it parts individuals into group. The majority of the explorers didn’t keep up with a comparative pace. So explorers were informally isolated into groups extending from prepared climbers to periodic climbers. Distance was there for first time explorers who experienced considerable difficulties soak slopes. They all ceased for a few snacks at the woodland of Dadhuwa. Following 3-4 hours, the group at the front arrived at Gilung and had some refreshment. The villagers gave a warm welcome by offering Tika and blossoms. The last group took a while coming in at around 6 PM.

The Gilung Devi Mandir, Gilung Bazar and the open grounds were the center attractions of the town. Everybody was having a ton of fun. They strolled around Gilung, took in the nearby attractions and the common beautiful magnificence. They had camp fire that night, sang melodies and delighted themselves the night away. This was one of the best experience the mates of Class of 2016 had together.

The group began their day with a visit to the well-known Gilung Temple located at the highest point of the Gilung slope. They all had their breakfast, said farewell to local people and proceeded with their hike. The goal today was Ghale Gaun. Surendra Sir had informed that today was an intense climb. The way would have been intense and everybody first needed to go downhill, cross a suspension extension and afterward needed to climb soak slants and many strides.

First the group, went downhill. They all took care of their thighs and leg muscles. Towards the end of intense ceaseless downhill walk, everybody got somewhat energized and halted for some light snacks on the Jholunge Pul. They remained there for quite a while, took a few photos and proceeded onward. Presently began the extreme tough move to Ghalegaun. Everybody needed to stroll up the slope.

The mates of the Class of 2016 persisted and proceeded with their climb for two or three hours. When they achieved the highest point of the slope everybody was depleted. They had arrived at a place called Maling. They had their lunch there which was at that point managed by the team lead.

After the truly necessary break, the group again began strolling towards Ghalegaun. Inevitably, night-time thorough trek, they were altogether depleted and blissful that they had achieved their goal. The most troublesome part was the inconclusive quantities of steps made with stones that was hectic on the way.
At around 6 P.M., the first group came to Ghalegaun and individuals were arriving till 7 PM. The crew were partitioned into groups of 4-5 individuals and appointed rooms at various homestay residences for the night. Everybody had their supper, then began playing cards. In the wake of playing card we slept. The group began an open air fire here also. The individuals who were extremely tired went to bed while some remained around the fire singing and making themselves cheerful.

It was one of the best morning the mates of Class of 2016 at any point had. The Annapurna range was obviously noticeable which an incredible sight. With the chilling morning climate at 2070m over the ocean level, they all spruced up. The crew visited numerous nearby attractions and making the most of their morning. Today they were headed to Besisahar and afterwards to Bandipur.

After breakfast the group moved down the hill from Ghalegaun for around 4-5 hours. Some called it the most tolerable ever. It was considerably more troublesome than climbing up. They then arrived at a place called Sera. From that point the first group arrived at Sera, took a Jeep to Besisahar. The second group came very nearly an hour later. At 4 P.M everybody had lunch at Besisahar. At that point they took a transport and arrived at Bandipur at 7PM. The place was lovely as usual. They roamed around for a bit. Everybody went to the celebrated Bandipur Bazar. Supper was served at 9 P.M.

Since it was the last night that the whole Class of 2016 would be together, they began the last campfire. Like each different evenings amid the trek, they were delighted and happy. They sang and sang, praised and celebrated their 4 years together. They went to bed at around 1A.M.

Today was the day the mates of Class of 2016 headed back for Kathmandu after an energizing and noteworthy hike. The group delighted themselves that morning at Bandipur going to places like Bandipur Bazar, the Silk Farm and numerous other superb spots. Everybody was caught up taking photographs of the region with each other. Some of headed to Siddeswor Cave (Siddha Gufa). They proceeded at 9 AM. Those who wanted to visit the cave walked to the cave while those who didn’t stayed around Bandipur for some time. At 11 AM, the second group was picked up by Deerwalk bus and headed towards Bimal Nagar where they waited for the other group who went to visit Siddha Gufa.

Siddha Gufa is the second largest cave of Nepal at 437m deep and 50m high. The ones who went there portrayed it as the best experience they had during the entire trip. After everyone arrived at Bimal Nagar, they all headed towards Kathmandu after taking Lunch at Manakamana Cable Car Entry point. They arrived at Kathmandu around 6 PM, said farewell to each other and went home.

Presently the excursion was over. Everybody honored their last snapshots of the trip by singing songs and dancing. The excursion was fun, energizing, at time troublesome yet above all huge experience.

One thought on “5 Day Hiking”