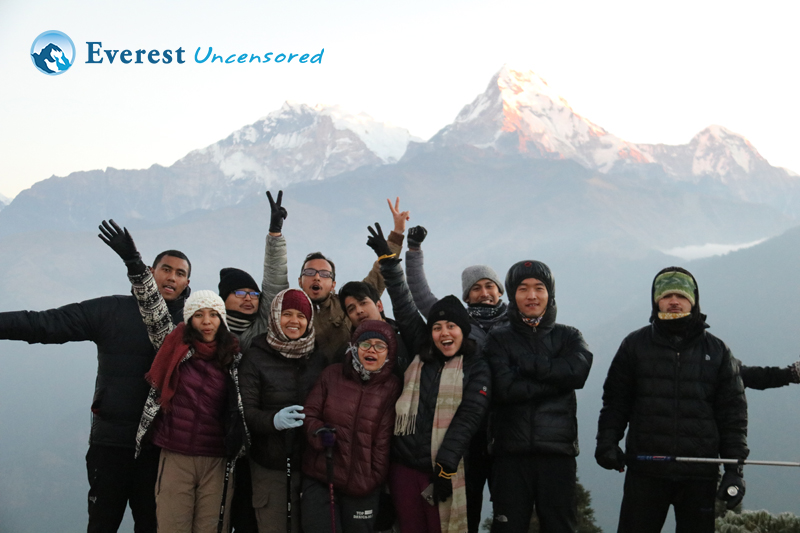 Our hiking to Poon Hill began on a very high note. The final exams were out of the way and everyone was hyped about the trip. The first destination was Bandipur. The first day was a chain of traffic jam, sleep, and more traffic jam. We reached Bandipur at around 10:00 pm. Since, everyone was tired there were only couple of people roaming around for some night strolls. Everyone went to bed after eating a hearty dinner.

29th November, 2017 – We started our first day of trekking. We woke up at the earliest to enjoy the sunrise for which our first location was popular for. The better view point was one additional hour walk to a nearby hilltop. However, the place where we were at also provided amazing view and due to the unavailability of enough time, we decided to enjoy the sunrise from Bandipur itself. Tudikhel, a large ground was popular as a view point from which we could see the sunrise gleaming through the hills. The weather was not in our favor and we missed the earliest sunrise. However, the location itself was amazing. A little saddened with the clouded weather we went to see the Bandipur Bazaar which was nearby from the Home stay. The architecture of the bazaar was truly amazing. Neat chilled environment and houses designed amazingly. Everything synced perfectly to its finest.

After,we got on our college bus accompanied by Rabin Dai and Madan Dai. The bus took us from to Pokhara and then to Nayapul where we had our lunch. Then we distributed the food stock we had and moved towards our first night Stay – Tikhedhunga. The route started as a big road which could handle buses. The initial route hence was easy and a good warmup. Next, we reached Birethati and slowly left the big road to the trekking route. The first day was meant to be a warm-up and therefore we reached first Sudame and then Hille and to Tikhedhunga easily. The frontrunners reached earliest and even managed to get showers and room of their choice.

After a little while, we were served with dinner. After dinner, we managed for the campfire. The campfire was fun. Chilling cold and hot logs accompanied with “Antakshari” was amazing. Seeing how competitive each team was and not prepared to lose we even got to hear original songs by our friends. After the campfire, some of our friends played cards while others enjoyed UNO.

As planned, we reached Ghorepani on 3rd day of our Trek. We stayed at Moonlight hotel where we were treated with warm hospitality. Before the start of the trek, we had made some estimation of everyday routes. Among those routes, Tikhedhunga to Ghorepani route was titled the most difficult and it would pose a challenge. But in reality, it wasn’t that scary but more of an exaggeration. After waking up everybody had lunch and we moved towards Ghorepani. This was to be the longest trail of the trip. We climbed through more than 3000 stone steps to Ulleri. Then we went through a shady trail with a beautiful stream running alongside the trail. There were beautiful waterfalls and pools of clear blue water that would make for a perfect spot to swim and chill if it was any warmer. We had our lunch at Nangethati and rested there for a while. Then we moved towards Ghorepani. The trail started to get foggy as we ascended higher. After a few hours of hike we reached Ghorepani. Everybody had hot showers and we huddled up around the fireplace. Some of the students roamed around the village for a while. Nothing was visible in the fog.In the night everyone gathered around the fireplace and had fun. We woke up the next day at 5am and moved towards PoonHill. It was an hour long hike up to top to watch the Sunrise. We reached PoonHill at 6 am. The sun started to rise and we got beautiful views of the mountains. We took a lot of photos. Had an expensive tea. Savored the view. Then we moved back towards Ghorepani.

On December 1st, we started our day with a sunrise from Poonhill viewpoint. The panel is popular for best sunrise view in Pokhara. We had to wake up at 4 in the morning and climb about one and half hour up from Ghorepani to Poonhill viewpoint. We had to use a torch to find the way up the hill in the dark. Up in the Poonhill viewpoint, all vegetation was whitish due to ice cold climate. We got to see the sunrise view over Dhaulagiri, Annapurna I, II, Annapurna South, Machhapuchhre (Fishtail) with whole other several mountains. After having a short photo session, we returned to the hotel in Ghorepani for breakfast. Everyone seemed energized after breakfast.

We left the hotel Moonlight, Gohrepani, around 8 in the morning and then took the descending trail to Tadapani village. Everyone was motivated after 2nd day hike, i.e. Tikhedhunga to Ghorepani which was relatively considered as the hardest part of our trek. Like everyone were happy after clearing the hurdle, Tikhedhunga- Ghorepani route. But most of us were caught off guard. Hike to Tadapani became the hurdle for most of us. The route was all misty, breezy dense forest with slippery path.
We first ascended through the ridges to Deurali Danda. It was the highest point on the trek (Ghorepani-Tadapani route). It had wooden logs artistically lodged in the mountain side served as the stairs. The top was decorated with prayer flags and neatly arranged stone slabs as seating place. After 2 hour ascend we passed Deurali Danda. Once passed Deurali Danda, we entered dense forest, still cold and misty route. After 2 hour descend, we reached Banthati. It was a village deep inside a forest. We took breaks in Banthati for a short time for snacks. Both were neatly paved rock stairs. We crossed several gentle streams over small wooden bridges, gushing waterfalls, abandoned wooden houses in the middle of nowhere and fluttering Buddhist flags. We marched forward after short half hour break observing the beauty of nature and living the joy of trekking. Tadapani route was full of ascent and descent with the addition of slipperiness. Because of slippery route, some of our best hikers had a minor fall (slippage) along the route. After Banthati, it was gradual descend to Tadapani which took 2-3 hours in all. We reached Fishtail View Hotel, Tadapani around 1:30 pm. Some of us were sorely disappointed when we came to realize that we’re at the end point, Tadapani. Weather in Tadapani was even harsher than Ghorepani. When we reached Tadapani, our clothes were drenched. We freshened up and huddled together in the dining area over conversation (menu with ridiculously high priced food items).

The 5th day was more of a chill-walk to Ghandruk. Almost everyone reached Ghandruk within 3 hours, the first group reaching the destination at about an hour. Ghandruk was a beautiful place. Open fields, full view of Annapurna range, Gurung dresses, good food, chilling weather with warm tea– What’s there not to like? In Ghandruk everyone was on their own. Some people went to experience Gurung culture some went to get some food and some got themselves into a streetball match with the locals; DWIT students lost- by a lot. After everything was said and done everyone enjoyed Ghandruk in their own subtle way. After that everyone decided to have a bonfire to end the day and the trip. 32 people around the fire talking about a lot of random things was quite an experience. Like always the night ended with good food, gossips, cards, UNO and a lot of laughter.

On, the last day we descended to the bus park and took a bus to Pokhara. We had our lunch– thakali lunch after quite some time tasted great to be honest. Then eventually we headed to Kathmandu.

This trip was one hell of a treat to most of Batch 2017. New bonds were made, old bonds were strengthened, stories were shared, laughter’s filled the air, and everyone had a great time and most of all everyone turned into “Bhattes” for at least 6 days in the trip. You will be surprised at the amount of rice and the people who ate that rice in this trip. Jokes aside, this trip being the final trip with these wonderful people was truly a priceless experience which will not be relived in the future again. It will stay alive in everyone’s memory and the experience will be cherished forever.