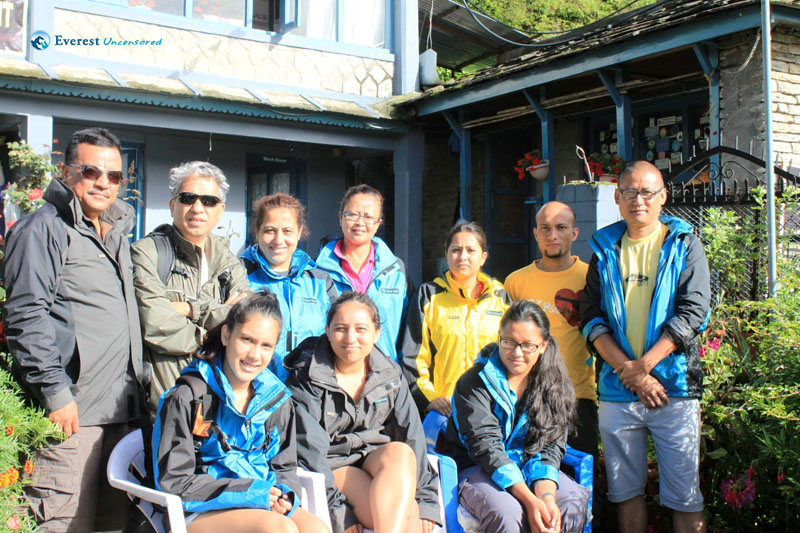 Mahika Pandey
I squinted against the stubborn glare of the sun and took a brief drink of water. My feet ached as I climbed up the stretch of steep steps. Our group was spread on the winding steps, climbing slowly and stopping to take quick pictures. I skirted around a pile of droppings, only to slosh water on my shirt.

We had set out from Kathmandu Friday afternoon, with heavy backpacks, a big bag of snack food, and an entire box of plastic water bottles. The seven-hour drive to Pokhara was alive with light talk and laughter. After a brief night’s sleep at the Pokhara Grande, our group reconciled for breakfast at the hotel. We piled back into the van at around 8 and drove and hour to Nayapul, where our hike began.

The first leg of the journey lasted two hours and was the easiest part. We walked on mostly flat land that was slightly inclined at the most.

It was cool by the falls and rivers and we passed fields blanketed in lush green rice paddies. The muddy roads held large puddles difficult to avoid.

It was cool by the falls and rivers and we passed fields blanketed in lush green rice paddies. The muddy roads held large puddles difficult to avoid. Eventually, all our shoes got soaked and we grew tired. We took our first long break in a small store by the road, and sipped on soft drinks. A big bag of cashews was passed around with slightly melted candy bars.

Shortly after our rest, we reached the Ghandruk stairs. We were to take these stairs for the rest of the hike to reach Ghandruk. The sight was discouraging. An endless stretch of steps loomed over us. In some places the stone was laid uneven, so the chances of tripping were high. Within a minute of climbing, I had already become bored. The motion was repetitive: Step. Pause. Step. Pause.

According to Pramod Dai’s itinerary, the entire upward climb was to take no more than one and a half hours. Three hours later we were all questioning Pramod Dai’s logic. The breaks grew more frequent and the complaints louder. It seemed everyone was of different opinion: my dad claimed that the hike was one of the easiest he’d been on and he didn’t understand our need for constant breaks. Bhuwan Uncle told us every half hour that we’d be there in twenty minutes. My sister accused everyone of lying. My mom vowed never to hike again with my dad.

After seven hours, lots of sweat, and more than one “I quit!” moment, we all climbed up the final steps to Hotel Trekkers Inn, our lodge for the night. We sat outside on plastic chairs and ordered cold drinks and a lot of food. My favorite part was finally giving my feet freedom from my wet socks and shoes. After a hearty meal, everyone went to their rooms and took a cold shower and changed their clothes. We reconciled for more food and a game of cards.

The night was tumultuous, full of heavy rain and lightning. We emerged from our room to find only a light drizzle remained of the rainstorm. Early morning, we took a short walk to see better the Annapurna Range, visible clearly from our location. After a lengthy photo session, we returned to the Inn for breakfast. At around 8 we set out, back to Nayapul.

It only took a few brief conversations with the passersby for us to discover that due to the overnight rain, a nearby pool was flooded, forcing us to take the “road less traveled” to Nayapul.

Within a few minutes of traveling the alternate route, I understood why it was the road less traveled.

At first the road was damp and grassy, which stimulated a leech-check every five minutes.

At first the road was damp and grassy, which stimulated a leech-check every five minutes. Then the road wasn’t even a road! Water flowed down the steps, and we were forced to wade through it. At first, everyone jumped nervously from stone to stone, trying so hard to keep their shoes free of the muddy water. But then everyone just gave up and we all ended up squelching through the grass, a liter in each sneaker.

We stopped to dump the water out of our shoes as soon as we were clear of the danger zone. After a lengthy break, we set out again. The disappointing part was ten minutes after the cleanse we were forced to wade through yet another river. I was tired, angry, and uncomfortable when we finally were free of the narrow, crooked paths for good.

Next, we found ourselves in a giant cornfield shaped like a boulevard. There was no clearly marked road here, since it was all grass and cornstalks. We walked throughout the field, circling around and around large patches of vegetation. When we finally found our way out of the maze, it was high noon and the sun was glaring up ahead.

We had planned to hitch a ride back to Nayapul as soon as we reached the road. To our dismay, no cars were available. So there was no option but to set off down the dry roads, basking in unbearable heat. Our once-plentiful water supply was diminishing. Out of fatigue and boredom our group settled into a dry silence. The only sound was the trooping of feet and the occasional water request.

After five hours, we finally reached a car that was willing to drive us to Nayapul. A twenty-minute car ride saved us three hours of walking – we were all very grateful!

Piling back into the van, we had a feast of snack food, with the air-conditioning on high! As soon as we reached Kathmandu at midnight I fell fast asleep. The next morning when I woke up all the memories of fatigue and beautiful views from the hike seemed like a dream – but my aching feet said otherwise!

0 thoughts on “Hiking from Nayapul to Ghandruk”