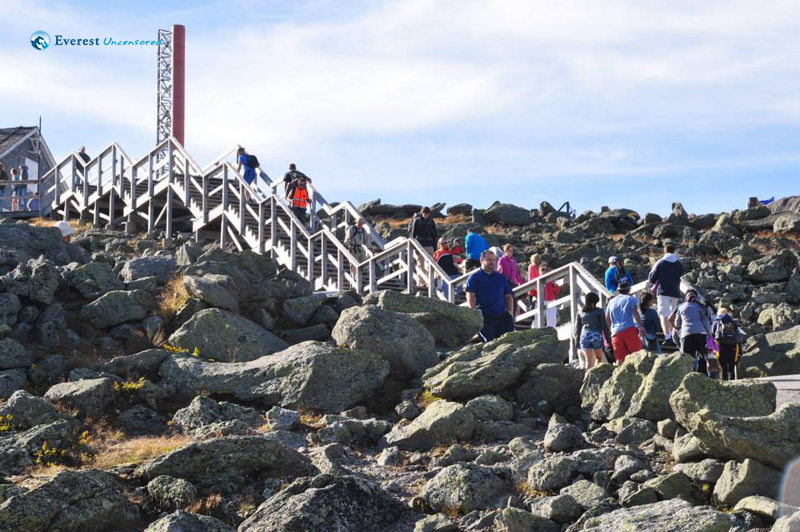 Ashay Thakur
Paved paths to the Pinkham Notch deliver you to the picturesque base of Mount Washington. The trees are plentiful, and that in itself is mesmerizing. We had looked up the hike. It was supposed to be 6 hours. Obviously, we thought it was for going up and back down. Not really. But more on that later.

On a normal day, Isha or Mahika would have been the youngest person up that summit. Instead, we had Neer, 6, Reiya, 7, both walking up the hill. I would not recommend taking your 6 year old up the hill.

The path is rocky. The rocks are huge. A lot of times, you are on all fours. That said, it is a rewarding view from up the hill.

The path is rocky. The rocks are huge. A lot of times, you are on all fours. That said, it is a rewarding view from up the hill. Everything around you is below you, and the winds in your hair do not dim the sense of accomplishment. We took the Tuckerman’s Ravine up the hill. This is a gradual climb. Relentless, but not too steep. This was 2 miles in. The next 2 miles would be the real hike. The more challenging of the two paths up the trail, we took the Lion’s head up to the summit. The ascent is rocky and steep. It is everything you do not want it to be with 20 pounds on your back. We hung on. We kind of had to. The descent looked scarier than the climb!

Going up, we would find people who told us we were four hours from the summit, or the standard half hour. I don’t know which I disliked more. The four hours that I knew I did not have in me, or the half hour which did not seem to end. No matter how long we walked, we seemed to be 30 mins away. The last leg of the summit was the most difficult, just because it was so rocky, so seemingly endless. It is a tough hike to the summit, and the descent would have been even more perilous, I would imagine. There were claims, that the summit was home to the worst weather in the world. Not really. But en route to the summit, you are tempted to believe.

Next time, we might do the Huntington trail, allegedly more adventurous. But for the camaraderie to the top, we wouldn’t have had nearly as much fun.

Isha Singh
Mt. Washington, the highest mountain in the New England region stands at 6,288 ft (1,917 m). My parents (Mabi and Muna) had been talking about the hike to the summit, with Muna aunty, Rudra uncle, Sanjeev uncle, Ashay uncle and friend Mahika Pandey. Pramod uncle, whom I had not met before, was picked at the Logan Airport, Boston, who had just landed from Nepal. Among the children were my brother Neer (6 yrs) and Reiya (7 yrs).

We left Boston area on Friday to the town of Lincoln, NH where a house was booked for us to stay for two nights. As Labor day weekend was around the corner, our drive to Lincoln NH, was a tiresome one because of the slow moving traffic. Labor day is one of the most travelled holidays in the US. Once on Lincoln, we were greeted by Tasty Momo’s that Muna aunty had brought.

We shared a room with four bunk beds while the grown-ups had their own rooms in the house. We were awakened early in the morning for the hike. After about 1 hour of drive on the highway, we were at Pinkham Notch (elevation 2031 ft), where the trail to Mt. Washington starts. There were few different trails but we decided to take Tuckerman Ravine route. Unlike other hiking trails, it was rocky from the very beginning. As we started going uphill, stepping and jumping over rocks, our group, initially together started separating out. Rudra uncle moved quickly and passed us from the beginning. After about two miles of ascending, we waited for other members of our group at a junction to take the Lion’s head route. Pramod uncle volunteered to wait for others.

Once we took the Lion’s Head route, the ascent got more difficult.

There were no clear paths, instead only rocks. Some were steep that we had to crawl, some were big that grown-ups had to push us up.

There were no clear paths, instead only rocks. Some were steep that we had to crawl, some were big that grown-ups had to push us up. At one point, the trail had a step ladder for it was not possible to climb. At this point, the vegetation was changing to coniferous and the trees were getting shorter (becoming bushes). As we were ahead of my parents, I was thinking how my little brother is managing such a route.

I had no idea that “hiking” could be like that too. As we approached the Lion’s head area, the rocks became bigger and dangerous. Very close to the Lion’s head, a big stone was split into a narrow passage so that hikers could get through. On the way we saw hikers on flip-flop sandals and even on bare foot. We saw people crying because of difficulty.

As we moved ahead of the Lion’s head, it started becoming very windy and cold. Mt. Washington has high winds and the worst weather in New England. A number of people have died there due to the low temperature. The people coming down from the top were cautiously stepping over rocks of various shape and sizes, which had green moss over them. There was no proper path. Mahika and I stayed together taking turns carrying the backpack with water and some food when we needed a boost of energy.

The 0.8 mile from the Lion’s head to the summit of Mt. Washington took forever to climb. We climbed and climbed but the top looked as if it was getting farther and farther. Going back would be harder so we didn’t have much of a choice than to push ourselves to the top. It felt like endless climb but the people coming down kept us encouraging by saying, “you are almost there, and it’s totally worth”. One woman told us there was pizza and hot chocolate at the top which really motivated us. That stretch was the hardest one. But after overcoming that span, we were on the top of Mt. Washington. We climbed around 4200 ft in about 5 hours. After some food, rest and wait, my parents along with my little brother too showed up happily.

There were only a few kids like Mahika and me on the hiking trail but none like my brother. We are going to cherish this hike in our memories and are already excited for the next hiking trip.

0 thoughts on “Hiking from Pinkham Notch to Mt. Washington”