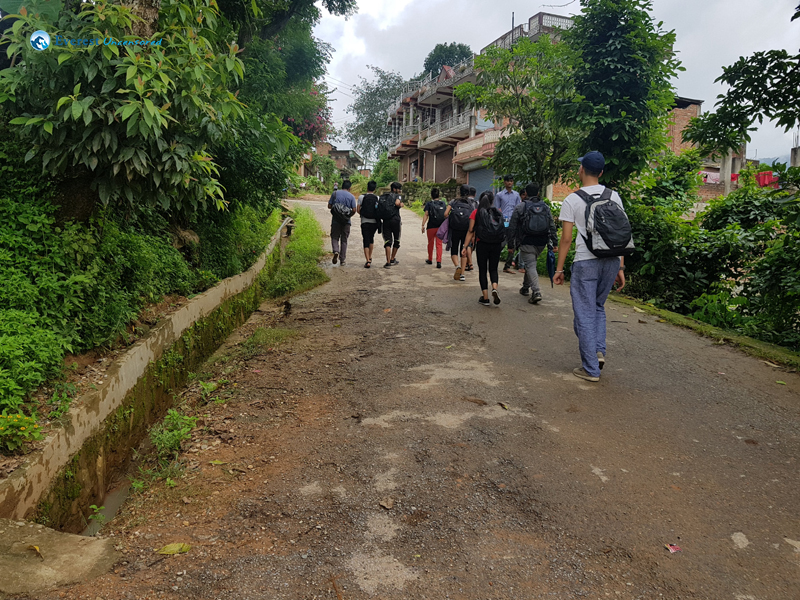 Avash Adhikari There was a jolt of excitement among us when we learned that a two – day hike was being organized by Deerwalk Services for squad D. After all, this was a perfect opportunity to take a break from normal life and dive into the ambiance of nature. Our hike was set to start from Gorkha Bazar and end at Kurintar, with Manakamana being the checkpoint.

On Saturday morning at around 7 a.m. we left off from Deerwalk premises. I was very excited about this hike as it was my first from Deerwalk. Accompanied by cheerful personalities, I knew this would be something that I would never forget. After picking up remaining hikers from their respective stops we were all set for our journey. We stopped at Naubise after an hour and half of drive for a quick breakfast and headed to our first destination, Gorkha Bazar.

By noon we reached Gorkha Bazar and decided to have a short visit at Gorkha Palace. After filling up our stomach and a short walk, we reached there. The palace was packed with worshippers and was still under renovation. This recalled our memories of the disastrous earthquake that took place in 25thApril,2015. We spent an hour exploring the historical artifacts and learning about the historical importance of the place.

Finally, we started our hike from Laxmi Bazar at around 2:15 p.m. It was a humid grey afternoon and there was no sign of scorching sun which is a perfect weather for any hike. We started walking downhill and half an hour into the journey, our hike was already turning out to be adventurous. We came across a river where some of us had great difficulty in crossing. However, with each other’s support we managed to cross only to realize that there was a bridge just a few meters away. Our journey continued as we enthusiastically and excitedly started walking uphill. That enthusiasm lasted only for few minutes as some of the hikers started feeling nauseated and tired as hell. In spite of the tiredness, we marched on slowly passing sarcastic comments on each other and cracking jokes once in a while. After few hours of walking we managed to reach a small village. The locals gave us the direction to shortcut routes and were kind enough to provide us some ‘Timur’ and salt which worked as a repellent for leeches.

Around at 7 p.m. we were at the top of the hill. We were actually at an altitude which was greater than that of Manakama’s. It was getting darker and the fog had also showed up. Our smartphones only being the source of light, we penetrated through the jungle and carefully passed by the slippery stones. Despite the leeches swarming inside our boots we just walked on as it was getting late and darker. Few minutes later we had a decision to make. We got confused about the route as there were multiple trails and we were not sure which one to take. After some discussion and analyzing the direction we decided to take a trail. Excitement and tension hung in the balance as none of us were pretty sure that we were headed to right direction and it was already very dark. To our relief, after few steps we saw a source of light coming far away from a hill. The light was distinct as it was the light coming from Manakamana Cable Car Station. Few moments later the rain also decided to pay us a visit. We marched on and around at 9:15 pm we finally reached our hotel.

The next morning, it was raining heavily. In fact, it rained whole night and there was no sign of stopping. After paying a visit to Manakamana temple and having our breakfast it was time to walk downhill all the way to Kurintar. We took off at 7 a.m. The road was slippery and full of obstacles. After walking for about 4 hours we finally reached our end destination, Kurintar. We had a delicious lunch there and left for Kathmandu at around 11:30 a.m.

Sujan Neupane I was so excited a lot when we knew Deerwalk is organizing two-day hike for squad D. I found it was a great opportunity for us to make strong bonding between us inside autistic nature. Our hike was planned to begin from Gorkha Bazar and end at Kurintar with manakamana being checkpoint.

We left off from Deerwalk premises on Saturday morning at around 7 a.m. It was my first hike from deerwalk and i was very excited from the beginning. I was hoping to make this hike as something that I would never forget. After picking up remaining hikers from their different stops we were all set for our journey. Before headed to to the destination we take short break at Naubise for quick breakfast. We reached Gorkha Bazar at around 1 P.M. where our hike was supposed to start from and we decide to visit Gorkha Place before we start the hike.We spent about an hour exploring this place which was destroyed by earthquake that took place in 25th April,2015.

At around 2:15 we started our hike from Laxmi Bazar and it was humid grey afternoon which was cool weather for our hike. In the beginning of hike, we walked through downhill for half hour and was turn to more adventurous when we have to cross river which was amazing moment. Everyone was helping each other crossing the river. Our journey continued as we enthusiastically and excitedly started walking uphill. That enthusiasm lasted only for few minutes as some of the hikers started feeling nauseated and tired. We reached small village after few hour of walking where we asked local peoples for the direction to our destination.

It was almost dark and covered with fog when we reached at the top of hill. We use our smartphone as source of light in the middle of jungle. We penetrated through the jungle and carefully passed by the slippery stones. Despite the leeches swarming inside our boots we just walked on as it was getting late and darker. We lost our routes once due to multiple trails and obviously it was dark. We were not sure if the route we took lead to the destination. We marched on and around at 9:15 pm we finally reached our hotel.

It was already raining before we open our eyes. After short visit to Manakamana temple we had our breakfast and at around 7 A.M we walk downhill all the way to Kurintar from where we took. The route was much more adventurous. After walking around 3 hours we finally landed to our final point of hike, Kurintar. We had launch before returning back to Kathmandu.