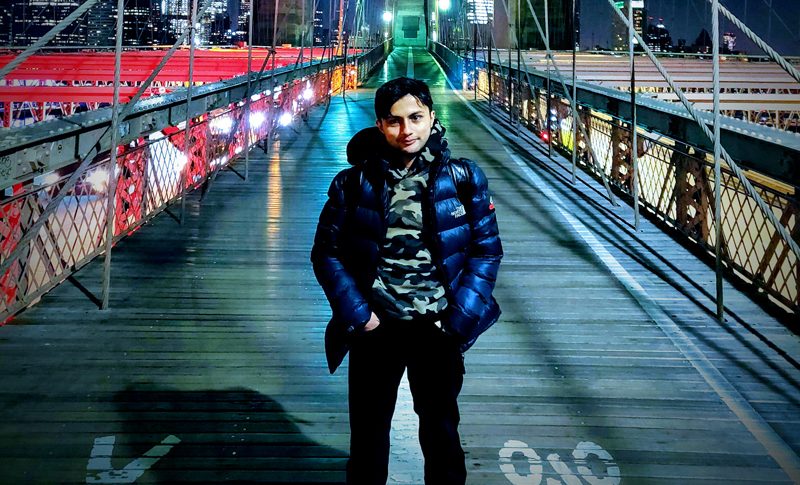 Imagine, (all the people, living for today – could not help it!) flying out at 2 am in the morning and getting to your destination at 2 pm in the afternoon the same day but you have actually been on the journey for more than 24 hours. The temporal paradox is a mindboggling concept and the idea of time travel is too big for my little head, but the way I felt it, January 2019 was the month when I travelled back in time. “720 precious hours, spend it wisely!”, was the constant voiceless thought in my head and the bad news was as we all know, time flies, but the good thing, I was the pilot. I had a faint inkling about the life, people, food, music, art, culture from the constant barrage of information that was processed throughout the lifetime of books, games, films, music, etc. Was it helpful? Without a doubt. Although in all fairness, there was one unknown factor which staggered me terribly, and that was how cold it got. Nobody comes back the same after going beyond the wall, and sadly neither the dragons nor the white walkers appeared once in this short tale. Maybe they did, once, or twice…

I felt like little Kevin Mccallister when it snowed, you know that little boy from Home Alone and I was up to no good either. Just for the heck of it, I tried eating it, the snow, and it didn’t taste like anything. It was a little bitter, I suppose. But the irony that I lived in the country of Himalayas and never saw snow up-close was lost to me because it did not matter where I was. For a month, it was home, and I had a family.

Exaudio, Comperio, Conloquor: To listen, to learn, to speak. This has not always been my motto.
“I work until beer o’clock” has not either. All pleasantries aside, I found myself in a completely different work environment, with practically no personal savoir faire of the work culture there. It’s not that I don’t enjoy work here. The difference was that I was not in the comfort of the bubble that I surround myself with, most of the time. The bubble, as one would expect, popped and voilà, the world was suddenly different. I loved working, discussing the potential concepts that Deerwalk could benefit from, brain-storming the ideas, I exaggerate, I have to. Because a few days in, I was a disappointed man who forgot for a moment why he was there. I missed playing games, missed being with my family and going for a pint or two with my friends. I got derailed for a bit there. I even complained at length to my brother about how everything was out of place and not meeting my expectations. The only light I saw was the light when I opened the refrigerator door at night (to grab a couple of beers). That was when lightning struck. There I was, in my room, confounded, when it dawned on me, the sheer abundance of exposure I was getting in such a short period of time as well as the first-hand experience of work ethics, communication, and way of life on the other side. Given that I was accustomed to struggling with organizing myself, procrastinating (sometimes) and for a lack of proper planning, getting myself overworked on occasions, I consider it to have been a learning experience, coming to the realization that working on a schedule, planning ahead, and sticking to a routine makes juggling workspace and personal engagements so much easier.

There is no question that most of the world was unknown. I am rarely startled by anything these days, but New York City, it’s a different world alright. It’s made up of millions of different people from all over the world, all go there looking for something. I arrived there one cold windy evening and after roaming around an entire night with a good friend, I suddenly remembered a song called Talkin’ New York by Bob Dylan, in the first verse of which, he sings, “People going down to the ground Building going up to the sky”, which is a perfect way to describe it. Mr. Zimmerman himself once said, New York was a city where you could be frozen to death in the midst of a busy street and nobody would notice. It was one cold night I will never forget. I returned back to Boston the day later during the snow storm. What’s so bad about snow storm? It’s fluffy snow, you make snow balls, or snowman, you play with it, right? Well, getting lost in the city at almost midnight, nobody in sight with a dead phone changes your perspective. I was frankly thrilled being inside the storm with a Cuban who rescued me and was very kind to drive me home.

An unusual sensation, if not indigestion, must be gratitude. Here’s to those who inspired me and don’t even know it. Thank you for being an important part of my stay there, for going out of your way to help me adapt and mostly for the opportunity, for the profound wisdom and erudition shared, for encouraging me to go past my limits, for the beers, the wisecracks, the repartee, the food, and simply for being present. I apologize if I made any remarks hurtful or otherwise, which earnestly was surely unintended. Excelsior!