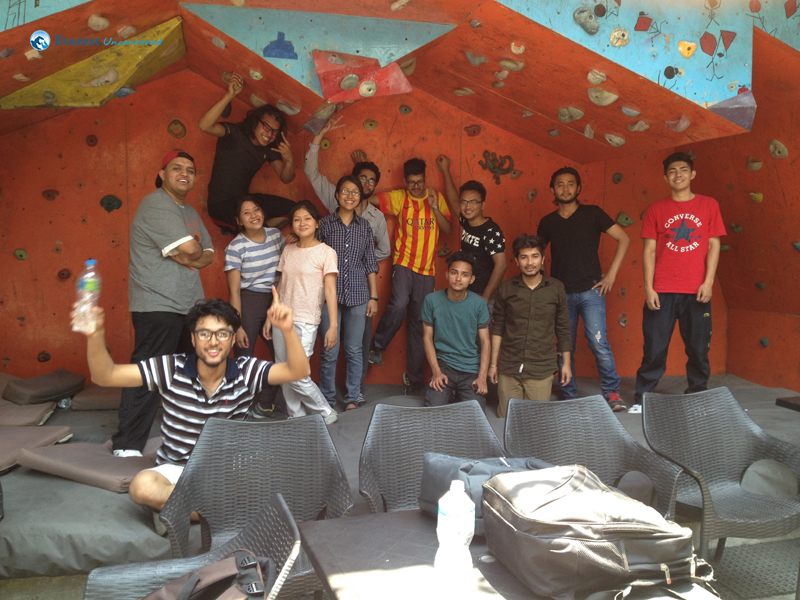 Prayush Shrestha
On 24th of April DWIT hiking club organized the first ever adventure sport of DWIT, Wall climbing. The venue for the wall climbing was Asterisk Wall Climbing; Thamel. The wall climbing was to be started at 10:00 am, however, due to traffic in the venue it started 40 minutes late. There were 12 participants to climb the wall that was at least 5 storey’s tall.

As all of us were doing it for the first time we were all filled with mixed emotion of nervousness and excitement. We put on our climbing shoes and harness then took our turn to climb. The first to climb the wall was The Great Prayush Shrestha, who climbed it in less than 5 minutes, which was a record that no one could beat. The four girl participants also completed climbing rather difficultly, but they did it which was praise worthy. Going up the wall really pumped up the adrenaline in our blood, it was tiring and strategic. Tiring as we had to power up the wall with our hands and legs, which sucked all the energy and strategic as we had to focus and choose wisely which hump to catch. Upon reaching the top we had to ring the bell which was a wonderful feeling.

Sameer Koirala
On Sunday, 24th April, DWIT Hiking Club organized a Wall Climbing event. We reached Asterik Climbing Wall at 10:00 PM. After registering our name for climbing we prepared for the climbing. At first seeing the wall that we needed to climb I didn’t think that I will be able to climb the wall to the top. But, after some time seeing that other people didn’t face much difficulty in reaching the top, I also got motivation to reach the top. Then I ascended the wall with the aim of reaching the top as fast as possible.

As this was my first time doing wall climbing I was a little bit nervous, but I was determined to reach the top. As the people at Asterik had suggested I just stepped on the protrusions, held tight on hand holds and kept pushing myself up. Before long I had reached the top and rang the bell. It was more fun to descend down with the help of belay. I didn’t think that I would enjoy wall climbing, but I absolutely enjoyed the event and reached the top for the second time. After having lunch we all separated towards our home. Hope DWIT Hiking Club will be taking us to more of the Wall Climbing.

One thought on “Wall Climbing at Astrek Wall Climb”