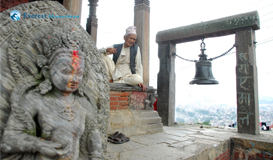 Photo Description:
This picture was taken in Kirtipur. It has an old man leaning on the pillars on which stands the great Uma Maheshwor Temple. The bell is as heavy as the sound it permeates, ringing through the hearts of the innumerable devotees. Kirtipur has a rich history manifested by the numerous temples that were built here; and Uma Maheshwar, a temple dedicated to Shiva and his consort, is one of the most famous of them. One can see a clear vista of Kirtipur and Kathmandu from the footsteps of the temple, a fitting homage to Lord Shiva who watches over his worshippers that reside in the cities.