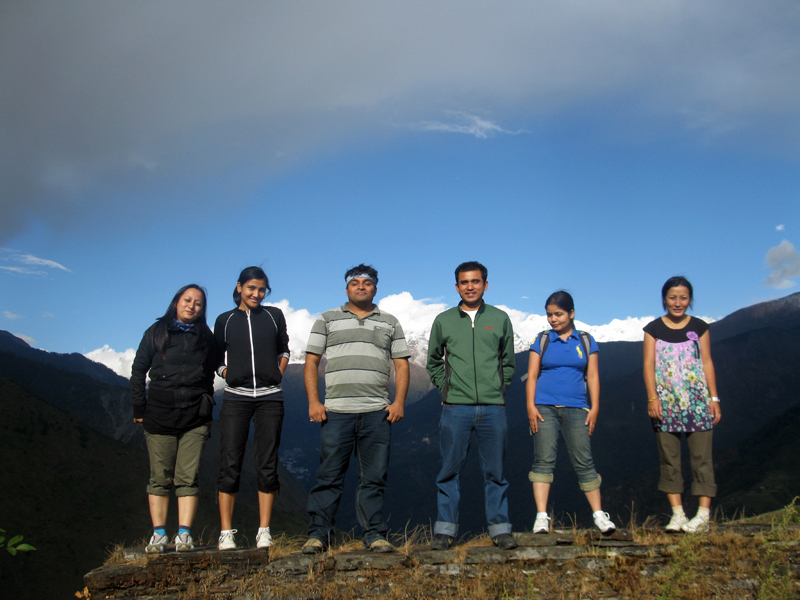 Sushma Pant
Tatopani held intrigue for me even as a kid, and stepping into the scathingly hot water after a long day of hiking was an amazing experience.

At about 8.30 PM, we reached zero kilo near Melamchi where we stopped for our breakfast. The hills and dales were absolute treats and as we moved along the river banks, I was mesmerized. 8 kilometers from Tatopani, we crossed a suspension bridge to kick off the hike to Tuhuro Gadhi. The ascent was decorated with beautiful stone walled houses that brought back years of yonder. Almost half way between the highway and the fort, as we neared a village, we ran into rain, and as we were getting drenched, we ran into a shade. After a couple of minutes there, we hiked upto the village in the rain. We had some hot wai wai soup and tea to fight the cold. As we hiked up to the fort, we saw a mountain peeking at us from the Chinese lands. The rainbow arc between the hills was beautiful. The strategic location of the fort and its design (which we guessed from the two feet high walls that remain) was perfect for the troops to defend during attacks by the enemies and for possible counter attacks. It was a proud moment for all of us atop the hill, a reminder of our ancestors’ bravery. I loved running down the slopes, and Vinod helped Ashay walk down. Bikram and Anita were sprinting like hares. Sabita and Rosina walked at their own pace. Back on level ground, we rode to Tatopani. The hot spring is called thus because it is HOT, I found. It was a soothing experience, though after the long day.

The friendship waterfall between Tatopani and Liping markets was an absolute treat to watch. We made it to the other side of the border amongst stark contrasts between Nepali and Chinese ways. Somehow, the Chinese are ever so slightly more organized J.

The trip back home was pleasant, and I hope to make several trips with the Deerwalk team, on tougher terrains, to even more pleasant sights.

Woke up early on in the excitement of the trip that followed, I was ready by 5:00. I peeped out the window and it was still dark, hence dropped the idea of leaving my room yet. With so much time to spare, I started to rearrange my bag and to analyze what I would really need and what only seemed necessary. From experience I knew it would be cold in Khasa but since we were hiking to Yarmasing, something light yet warm would be the best fit for the trip. I was in the middle of this quagmire when my cell phone rang. It was Bikram, informing our transport had already left Deerwalk and would pick us up at Baneshwor in a while. I took my bag and quickly left for the pickup spot.

The micro van arrived at around 6:50. As the van screeched to a halt, I took a deep breath; I knew I would be seeing several new faces behind the door. The van door opened and I could see a few pair of beaming eyes as I entered and occupied the last seat. I was at ease after I had an informal introduction with everyone aboard. Sushma, Sabita, Ashay and Vinod, I recalled the names in my heart as the wheels were turning. Rozina joined us later at Koteshwor. We shared a few chuckles and were mostly silent. We made our first stop at 0 kilo for tea break. By then, I was comfortable with the company. We set off again after a brief chat over tea. It seemed the tea break had really refreshed everyone possibly energized us. We divided into two groups and played antakshari until just before we started the hike. Only Sabita had been to Tuhuro Gadhi before and we were counting on her memory to locate the place we would start our hike from. A couple of false alarm and we were a little baffled that we might have missed the hiking spot. Nonetheless, hoping against hope, we continued to roll ahead. Ultimately, we reached the place. We climbed down the van, stretched a bit and then prepared for the hike- applying sun block, stuffing the two bags, Bikram and Vinod were to carry, with edibles, water bottle and other requisites. Ram dai left us there and headed towards Tatopani to arrange for our lodging that night.

The sun was just above us casting upon harsh rays directly. I wondered if it would take us twice the time to reach our destination because of the scorching heat. It was my first hike in two years so I was uncertain if I could catch up with everyone in the hike. With several random thoughts in mind, I followed the group that took a feeder west to the Araniko Highway. At the start we crossed a suspension bridge over Bhote Koshi. I glanced at the series of hills, pondering how many we were going to mount while the hills stood tall and seemingly unsurpassable. I decided I would focus on one step a time and not think of the whole hike at once. When we reached the foot hill, I realized I was not the only one skeptical. After walking for about 15 minutes, I was convinced the hike was not as tough as it seemed. On the way we met locals returning their home. We followed the path they took, convinced that they were taking shorter routes. We took our first stop together with them. We drank water, conversed with the locals and then set off again.

Atop the hills, we took several photographs and then came downhill.

Ram dai was already there, waiting for us. The sun was about to set and we hurried towards Tatopani. We reached there at around 6.30 p.m. We took our luggage to our room Ram dai had booked in ‘‘Maitee Lodge”, freshened up and then went for a hot water bath (Geothermal spring). After a day’s hiking, the hot water bath was rejuvenating. Following the bath, we met up for dinner and then the boys gathered in girls’ room. We played cards and Dumb charades past mid-night. It was fun.

We hiked for almost a whole day, enjoyed the natural beauty and the historic treasure both at one place, had rejuvenating dip in the geothermal spring water at Taatopani and went on a shopping spree at the Chinese market. So much for mere two days- packed; packed with action and fun, full on.

8 thoughts on “Hiking from Tuhuro Gadhi to Tatopani”