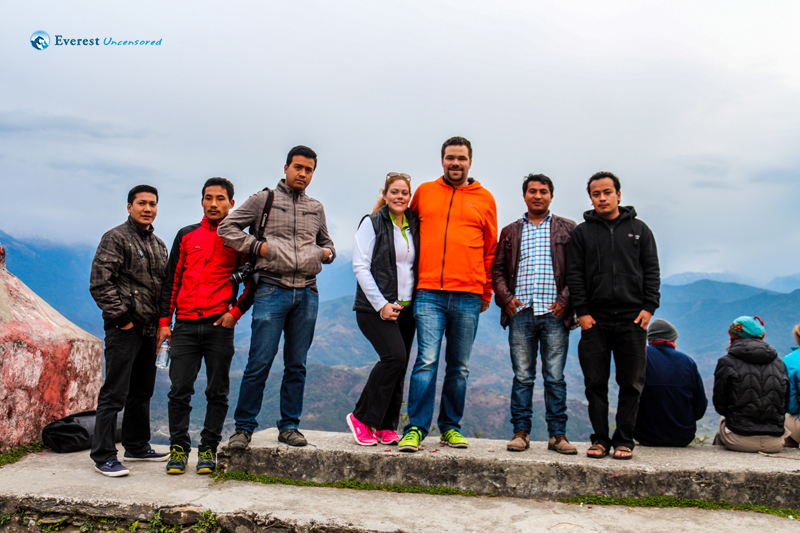 Nistha Upreti
Early in the bright Saturday morning of 28th February 2015, a group of fourteen Deerwalkers set out on an adventurous trip to Pokhara. It was very special for me as it was my first outing from Deerwalk and it was also very special for Shrijana Tandukar and Lisa Rick as they were going to Pokhara for the first time. Our first halt was at Halmet Restaurant, for some breakfast. Then our journey continued with various games in the shuttle. After the joyful journey of six hours we reached our destination. The weather in Pokhara was very good that day, with a clear view of the Himalayan ranges.

After the tough cave adventure, we headed towards Begnas Lake. Boating at dusk and watching the sky changing its color. And to watch the twinkling stars from the middle of the lake was a very good feeling.

After resting for some time and freshening up in the hotel, we then went for lunch. The Pizzeria restaurant at lakeside had good wood fired pizzas and warm interiors. Then our group headed towards the Bat Cave. It was a very exciting and adventurous place, but completing the cave route was very challenging. Hence most of us returned back from the middle. After the tough cave adventure, we headed towards Begnas Lake. Boating at dusk and watching the sky changing its color. And to watch the twinkling stars from the middle of the lake was a very good feeling. After the heavenly feeling in the Begnas Lake, we went to Busy-Bee Restaurant to enjoy the Saturday night with live music, good food and plenty of drinks.

Early next morning, we went to Sarangkot to view the sunrise scene amidst the beautiful mountain ranges and spectacular view of the city with the lakes. But, unfortunately due to the bad weather condition that day we could not see the view much clearly. After returning back to the lakeside, we had a very good Nepali breakfast in a local restaurant. Then we all came back to the hotel and took naps while Jeff and Lisa went around Pamae for mountain biking in a cool and almost rainy weather.

After checking out from the hotel, we headed back to Kathmandu. By this time the weather was quite bad, it was cold and raining. After some time we reached the famous Duna-Tapari Restaurant for lunch. There we received a call from Jeff that their flight was cancelled for that day. Since, we had nothing better to do while waiting for Jeff and Lisa, we all started playing cards. They arrived in about an hour, and then we all headed towards Kathmandu. The final halt for our home was at Malekhu where we had hot fried fish and tea. Despite the bad weather condition: heavy and non-stop rainfall, and dark cold day, we reached back home safely. Special thanks for this trip goes to our Coordinator Manish man Singh, Deepak Gurung for the safe ride and to Jeff and Lisa Rick. It was a memorable trip altogether and will be cherished by all of us.