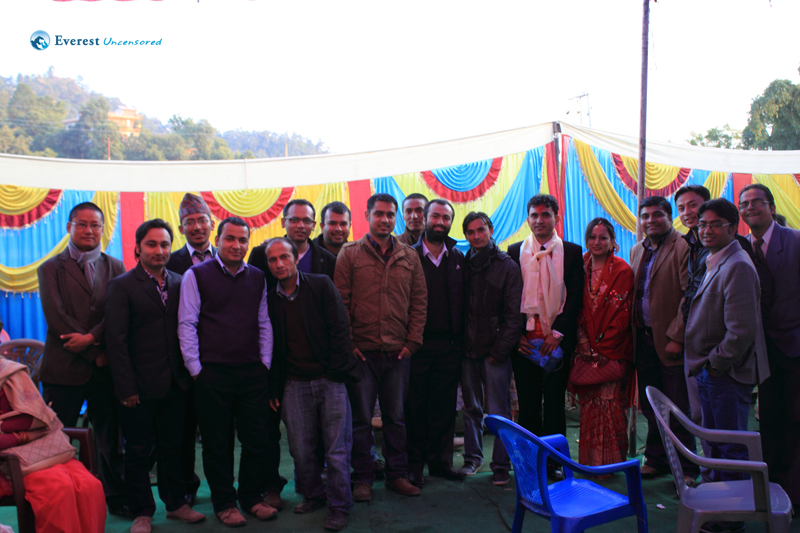 On Saturday, Dec 1, 2012, fourteen Deerwalk employees and I went to Pokhara to attend Bikram dai’s wedding reception. We were supposed to leave Deerwalk office at 6:30 am. However, some of us had our clocks set to “Nepali time” and therefore ended up leaving at at 7:00 am. The prospect of attending Bikram dai’s wedding and being in Pokhara excited us all. When we crossed Thankot and the road started winding around the hills, I felt a sense of freedom away from the polluted Kathmandu city. Ram dai took us to Naubise where we stopped for breakfast of “masu-chiura”. We continued on the winding road and stopped at Damauli for lunch. We got to the famous lake side of Pokhara to find a hotel and freshen up before going to Bikram dai’s wedding reception at Lekhnath.

Pramod Bhandari dai’s friend suggested a hotel named “Hotel Confidential”. We laughed at the name, but decided to check it out anyways. The rooms looked clean and the beds comfortable. So, we decided to stay there. However, the mystery still remains on why the hotel was named confidential. After changing clothes and freshening up, we headed for Bikram dai’s wedding reception.

Bikram dai’s wedding party was being held in the backyard of his own house. We went inside and found Bikram dai greeting us with a smile on his face and without his trade mark long hair. Kapil dai commented that he looked like a sixteen year old with short hair. Bikram dai’s wife to be looked gorgeous in her red. After congratulating them we had some delicious food and gave Bikram dai his wedding gift. Drinks were flowing as we chatted with the people at the party. We also enjoyed dance performances by a few girls on stage.

We went inside and found Bikram dai greeting us with a smile on his face, and without his trade mark long hair.

It was getting late but Kapil dai did not want to leave without a bang. His idea was for all of us to dance together along with the bride and the groom. Since everyone was shy I stepped on the dance floor first. Bikram dai’s dance with Awanish dai was pretty epic. After having a great time, we left for the lake side.

Abhinayak, Suraj and I had challenged Kapil dai on the game of pool at the Busy Bee. I luckily managed to win one game before Kapil dai beat everyone else. We left Busy Bee late and headed for the hotel. We played cards and I lost a lot of money; guess gambling while drunk is not a good idea after all.

Next day, after breakfast, some of us went boating while others went cycling. We rented a platform boat and soon Ashay dai and I were pedaling towards the center of the lake. Watching paragliders from the boat was a unique experience. We relaxed watching hills in the distance and the shining reflection of the sunlight in the lake. Around 1 pm, we got back to the hotel, regrouped and headed for Kathmandu. We reached the capital at around 8pm.

It was a nice trip away from our hectic schedule. Pokhara refreshed and recharged all of us. Thanks Bikram dai for inviting us to the wedding and for having the ceremony in Pokhara, as it doubled the fun. We all wish you a happy married life.

The wonderful day of 1st Dec 2012 began with the gathering of fifteen enthusiastic people at Deerwalk premises. Generally gathering of Deerwalkers on every Saturday morning is for the traditional Deerwalk hike. But this very Saturday was going to be different from the usual traditional practice because we were going to attend Bikram’s wedding reception at his hometown, Pokhara. I have never said no to any expedition with the label ‘Pokhara’ and this time it was no different.

I have never said no to any expedition with the label ‘Pokhara’, and this time it was no different.

Tuning on the loud music we made our way to Pokhara, which lies approximately 200 km from the capital, at 6:45 am. On the way at Naubise, we stopped for breakfast consisting of “masu chiura” (beaten rice with meat) followed by vodka shots. The thrill of the highway got soaked in through my eyes to my heart as we approached Pokhara. I was happy to be there.

Near Bandipur, at around 11pm, we had a hearty lunch consisting of the local “kukhura ko masu” and chilled beer. It was already 4 pm when we reached the famous Pokhara lakeside (called so because of its proximity to Fewa Lake). Pramod Bhandari, aka Dari, had four rooms booked for us at a hotel. Team leaders Pramod Rai and Abanish Kayastha gave us some time for refreshment. We then made our way to Lekhnath, where Bikram’s wedding reception party was taking place.

Bikram’s elder brother greeted us warmly at the gate. Our gift, that shall not be named, was unique. The newly married couple looked so wonderful together that I could not take my eyes off them. We rocked the dance floor after the finger licking dinner. The married couple accompanied us in the madness that ensued on the floor. Sailesh, Awanish, Ashay and Sawan blew our minds with their spectacular moves. Awanish, Bikram’s usual dance partner, danced for the last time with him.

After greeting each member of Bikram’s family, we departed along with the groom. Lakeside may be the only place in Nepal where you would have so many options to spend your money, and still would not regret doing so. We went to the Busy Bees (a local pub) which had live music and a billiard table. Kapil beat everyone including me, Sailesh, Abhinayak and Minesh. The defeated ones were supposed to buy him beer.

After the last bottle of beer at Busy Bee, we went to our rooms at the hotel. Lava was not drunk enough, so he proposed to take home some more drinks. Even after such an exhausting party, instead of resting Pramod, Abanish, Ashay, Kapil, Sagar, Abhinayak and Sailesh decided to test their luck with cards. Poor Sailesh and Kapil had hard luck.

We woke up late to a bright and clean morning. During breakfast, some of us proposed to go boating on the lake while others wanted to cycle around the town. We were out of time to enjoy both, therefore formed two teams. Abanish was the lead for the cycling team that included Abhinayak, Awanish, Pramod, Sawan and I; and the rest went boating.

We rented six mountain bikes for Rs. 150 each and cycled to Pame, a local village around Fewa Lake. The view of the lake on the way was jaw dropping. We could see people paragliding above us. As we raced our bikes Pramod proved to have the highest stamina and Abhinayak the least.

At 1 pm, we realized that we were out of time, and got seated in the vehicle ready to go. On the way back to Kathmandu, Lava was cracking jokes and we laughed along. It was about 9 pm when we reached Kathmandu, and Ram dai dropped each and every one of us safely home.

All in all, the trip was a success; and I feel lucky to have been a part of it. In the aftermath, I felt my heart lost in the beauty and wonder of Pokhara. I had said I would never say no to Pokhara, and I stand by it. I want to express my gratitude to Deerwalk for providing me with the opportunity to be a part of such an outing.

Congratulations yet again to Bikram and his lovely wife Anita. I wish them a happy and successful married life.