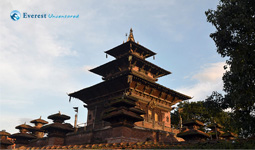 Photo Description:
The Taleju Temple is a large temple in the Hanuman Dhoka Durbar Square. The temple is an oddity among temples in Nepal as it opens its doors to the public only once a year, on Maha Navami during Navarati. During that day, thousands of people stay in line for several hours to have a glimpse of this elegant yet inaccessible temple.

The Taleju Temple was built in 1564 AD by King Mahendra Malla, the three-stores temple is built in traditional pagoda style and was dedicated to Taleju, a Newari variant of Goddess Durga. The compound of the temple consists of the main temple and twelve other mini-temples around temple.