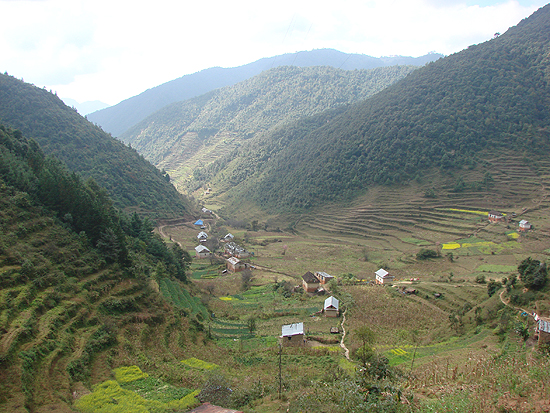 This Sunday, the team set out for the wonders at Khadpu-Pharping from Mata Tirtha. Mata Tirtha is itself famous as the source of fresh water for the Kathmandu valley. Pharping is known for the first hydro project ever in the history of Nepal and now, a perennial source of clean drinking water for the Kathmandu valley people. Owing to various reason, the team had shrunk to just three. Hence, the beginning it self was adventurous; just three people walking hours to the height, through the jungles; very interesting.

The team reached Matatirtha on the van. The team was served with boiled egg and tea at the local teashop. Then the ascent up to Deurali began. The ascent is challenging and the team did it in two hours. At the summit of the Deurali the team stopped for a while, to relieve the tiredness. There we found a small teashop and we did not want to waste the opportunity to drink some tea and enjoy the view from the top.

Observing the valley from the altitude

As soon as we had enough rest we began our ascent to Makaibari (meaning corn field) which is a small village in a small valley that let us walk on more or less flat trail up to Khadpu. From this junction we had to walk on the motorable road up to Phakhel. Phakhel is a place with few shops where the bus and jeep from Hetuada to Kathmandu stop for refreshment. This area is also famous for vegetables farming.

Descending down the trail

After leaving Phakhel for about 15 minutes a beautiful trail led us towards another Deurali that required us to climb for about a little more than an hour to reach the top of the Deurali. As soon as we were at the top we could see the lovely view of the Pharping town just below. From this point onward we climbed down for one hour to reach Pharping from where we could catch the van and end the day’s hike.

But it was time now for relaxation. The team proceeded towards the Royal Hana Restaurant (Japanese) to enjoy the hot bath in the Jacuzzi. The relaxation was so soothing that we forgot that we had walked for 7 hours. We spent about an hour at the Jacuzzi with a company of other people. Then we had a dinner at the restaurant. Thus the hiking for this week was over. But the EU team desires to explore much more in the following weeks as well.

The old and the youths

Bishnu and Keshav at breakfast

Set out for a work

The peak towering to the sky

The cock and the hen

Bishnu and Keshav under the fruit ladden tree

Valley under the cloudy morning

Hello, just a while: Surendra seeks something at the bag

Bishnu at rest under the Buddhist shrine

Donators: the name of the people who donated to make the path

The team wnjoying tea at the local tea shop

Our livelihood: two women carry the load of firewood from the jungle. They said they sold the firewood to make their livelihood.

An old man at rest

Child labor! Not at all these children brought the rice and oil distributed by an American organisation

The rural set up and the people

Towards the Buddhist Shrine

Field and the flowers

Looking through the trees

Through the rocky path

The other deity at the south: Dakshin Budhanilkantha