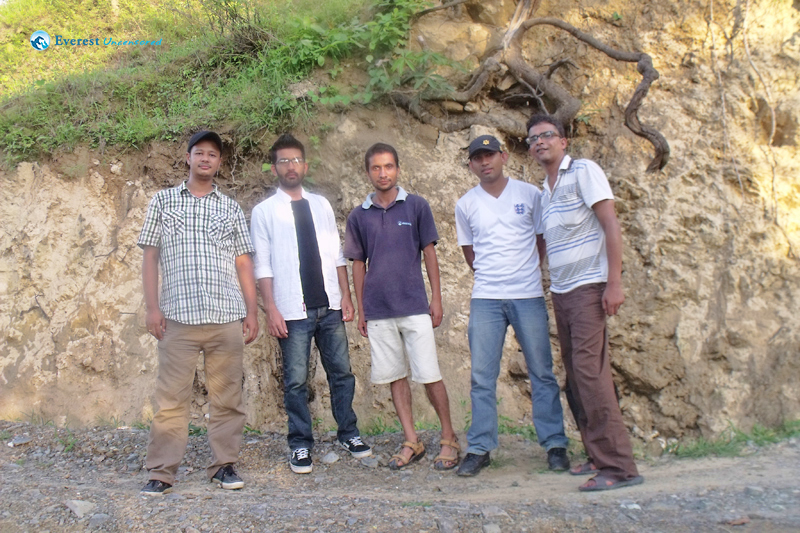 Gautam Acharya
With the decision of celebrating the “Deerwalk Outing” in a non-conventional way, the journey towards Dhading – our final destination, started from the Deerwalk premise early in the morning at around 6 AM. The van journey became quite interesting and joyful because of the gossips, jokes, Lava dai’s childhood stories and “WOW WOW”s :D.

We had some light breakfast in Dharke in one of the Lava Dai’s favourite hangout place. Another interesting thing was, Pawan dai was still following the ongoing processings and was constantly answering calls and messages to resolve issues/provide required informations to respective callers, while we were on the road or having breakfast.

Our destination was Bhikkhu Sadhana Sthal located on the way to Raanibari from MahadevBesi. After reaching MahadevBesi Bazaar, Dhading, we had to deviate from the main road and follow an off-road tracks for some time to reach there. During the off-road drive, there were places where we literally had to get out of the van and do some maintenance of the road like filling the muds with stones. After those experiences in the road, reaching the destination gave us a different kind of energy or joyfulness. The weather was perfect, scenery around was perfect and the location was perfect. Our plan was to meditate for some time there. Though I was a little skeptic about all these meditation stuffs, that one hour session really helped me to understand meditation in a different but positive way. I would love to try it again. So, after finishing the meditation session, we had a delicious lunch prepared by cook Lekhnath Dai. Our next plans for that day were to distribute some copies and pencils to students of local school there, do some hiking and finally plant 20 trees around that place. But unfortunately, copy distribution plan cancelled since the local school was closed and students were on Rainy Vacation, so we decided to store the copies and pencils at the meditation center and made plans to again come there some other time and complete the task. Then our hiking started with some glucose power. The hiking continued for about two hours. And after the completion of hiking, the tree plantation program started. Our Umesh Dai did a really fantastic job during the plantation and helped us in almost every parts of the job. After finishing the plantation, we cleaned ourselves and had some fruits, rested for some time and finally started our journey back to Deerwalk Premise.

Though this “Outing” was completely different than the other on-going “Outing” culture in Deerwalk, I really enjoyed every second of that day. Trying something new in times really helps to freshen the mind from the daily busy schedule. The plan of our team members to spend the outing money to do something that really mattered rather than spend it on other luxurious things was really something to cheer about. If possible, I would again like to go for such events in near future.

Pawan Sharma
When people think of “Team building” the first thing that comes to people’s minds is Booze, Parties, Games etc. But our team (The BlockHead Research Lab) who are almost unknown in deerwalk decided to do it differently.

It was a fine morning in July (2015) with light haze surrounding Kathmandu. We (GautamA , LavaK and me) came to office, checked our stuffs and left deerwalk permise, picking two of our folks (LekhnathB and DineshA) on the way. Within an hour, we were driving west towards thankot.From the very beginning of the journey, Lava dai was entertaining us but he had to be silent for 30 min due to his tooth problem.

We stopped at Dharke around 7:30 AM for breakfast. We reached Dhading earlier than expected and started shopping for our lunch. We reached Bhikkhu Sadhana Sthal around 10:00. We did some sight seeing over there and went to Meditation room. After an hour of meditation, we felt our physical body and spiritual mind transformed.

After having lunch we started our hiking.We hiked for 2 Hrs through narrow trails, green paddies, native villages and tough steep hill slopes.While enjoying the beauty of nature, we also rested at different locations devouring organic fruits.We came back to Meditation center for plantation of different kinds of trees. After a short break, we (LekhnathB,GautamA,UmeshS and me) started digging in tough slope, while LavaK and DineshA watched the whole process. It was a surreal experiences as i had never sowed any plant before.

Ultimately after working under the scorching sun, we completed the plantation and had some shoothing glucose water for refreshment along with some fruits.We did the parting meditation for an hour listening to vipassanna preachings and then we were on our way back to kathmandu.