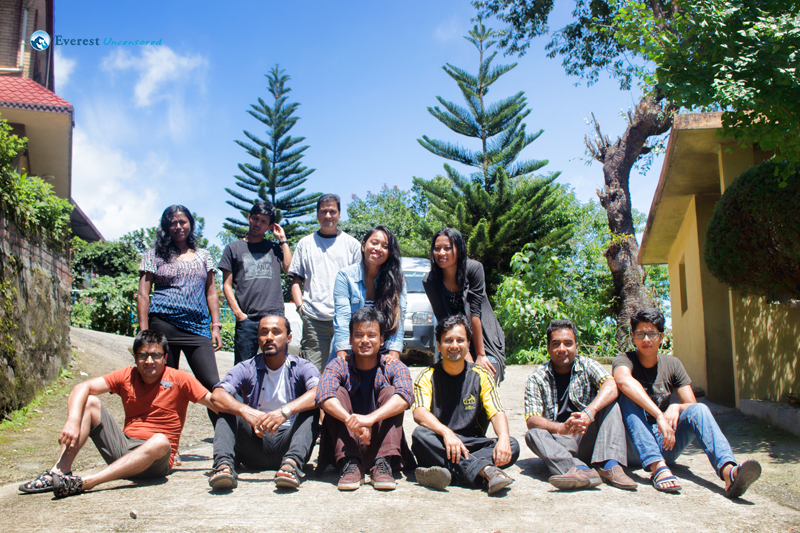 After swimming for a while we had heavy snacks. The snacks item ranged from items that included potatoes to a variety of different vegetarian and non-vegetarian items. Then we started to dance and the most funniest part was when we even danced to ‘IELTS preparation audio classes’ of Suman. Then with help of Krishna, Nitish and Aawart we began dancing on Nepali songs such as ‘Bottle ko pani’, ‘jalma-resham filili’.

the most funniest part was when we even danced to ‘IELTS preparation audio classes’ of Suman.

Aawart was the designated photographer for the outing and he captured memorable moments well. After the dance, we had our lunch and lay around the pool. After a while, we played cards before falling to sleep.

Next day we began with swimming and a short hike to ‘Macchegaun’. We ate our breakfast and went through numerous photo sessions before leaving the resort. This memorable outing was to a realization that it does not really matter where you choose your destination, what matters is the company with whom you are.

Saurav Karki
After going through the devastating earthquake we finally had our trip to Khusi Khusi resort which was my first outing in Deerwalk. It is located at Matatirtha inside Kathmandu valley and appeared unaffected by the earthquake.

As the trip was to start on 24th July, but due to the strike, we finally headed towards the destination on 25th July. Nitish, Aawart and me started the journey from Deerwalk office, picking the rest in the way. The journey was so exciting that in no time we were there. The resort was very pleasant with a swimming pool in it. We immediately jumped into the pool and immediately felt stress-free after the hectic schedule in office. Then Aawart started taking photographs and others were playing table tennis. Shortly after that there was a rain and snacks and drinks were served. After a couple of hours our dinner was ready around 9 pm. After dinner we played cards, Sangita di and Prativa di were the winners of the night and rested for the night.

After a long night we woke up early in 7 am and got ready for the hike towards Machhegaun, and found that some of them had already started. We were very tired and hungry after a long hour of hike. Some of us went for breakfast and rest went for swimming. The bus arrived after a while and we took some group photos and headed back. Lastly, I would like to take this opportunity to thank my team mates that after 2 – 3 months of work at Deerwalk I was given a chance to know each other better